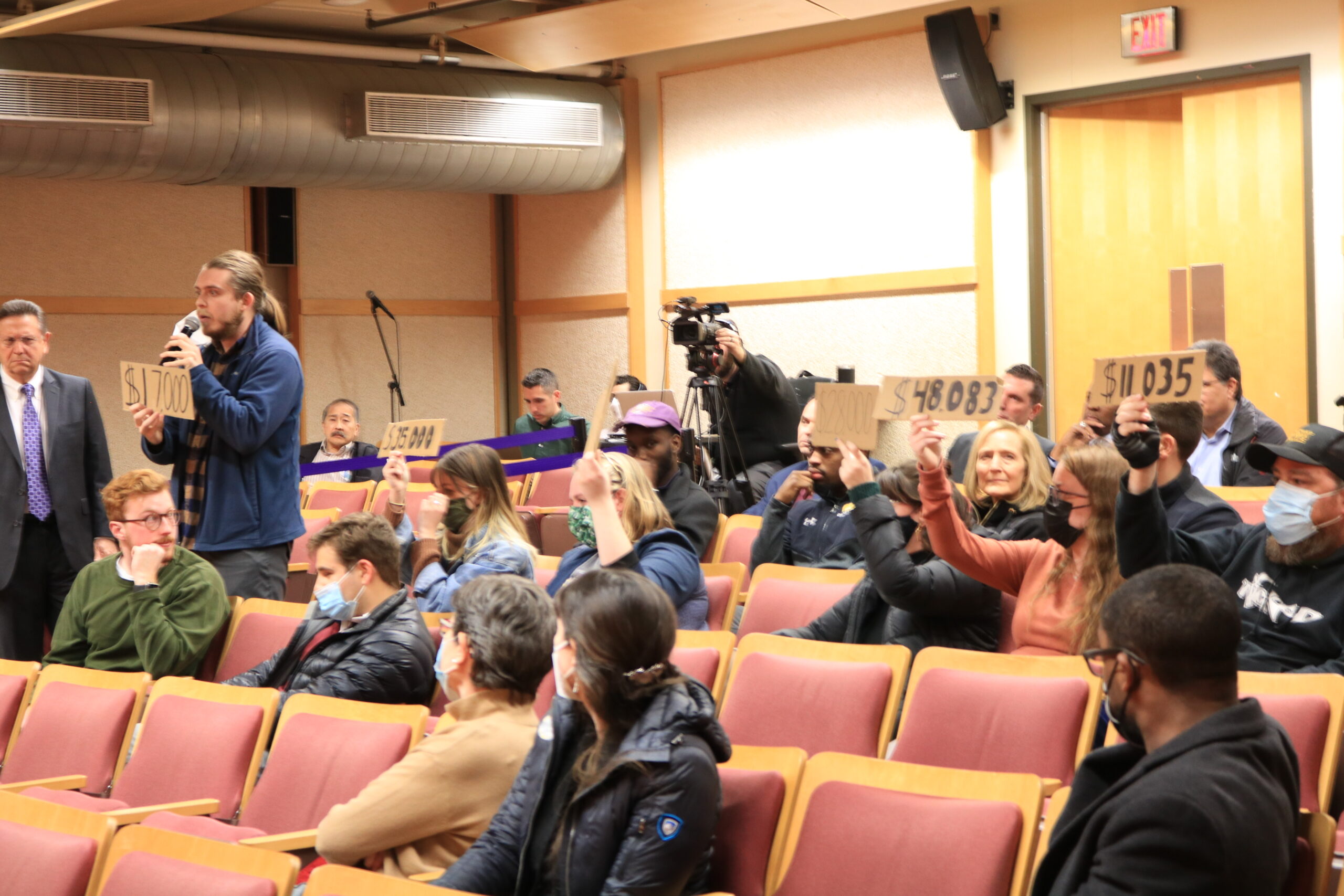 This past Thursday, March 3, the Chancellor of PASSHE (PA State System of Higher Education), Dan Greenstein, visited West Chester University to learn more about the university’s various initiatives to create a more equitable, opportune and meaningful educational system, as well as to hold an open forum.

During the visit, the Chancellor spoke with campus groups to learn about the Moon Shot for Equity Partnership, programs under the Office for Diversity, Equity and Inclusion, and the educational experience that the SECC building will provide. However, one of the highlights of the visit was an open forum held in Sykes theater, giving students, faculty and staff the opportunity to voice their concerns about PASSHE’s handling of higher education.

The Chancellor started the forum by speaking on the topic of how divided the current state of Pennsylvania politics is right now, citing the difficulty that exists in garnering the 177 bipartisan votes necessary to effectively pass legislation. Specifically, legislation that much of the PA public is asking for.

“The governor’s office is Democratic and the house and senate are Republican so in order to get legislation passed, we have to do the most difficult thing in American politics today, which is to build a coalition in the senate,” said Greenstein.

However, upon progressing to the Q&A section of the open forum, Greenstein was met with many concerns regarding free public education, diversity and the university integration process underway under PASSHE.

First discussed was the call for free public higher education and whether the Chancellor would be making any moves upon that request. Numerous attendees spoke of the considerable amount of student loan debt they found themselves in after college, calling on the state legislature and the Chancellor himself to increase funding towards public higher education and reduce tuition.

Upon questioning Greenstein on his plans, members of a group in the audience promptly displayed pieces of cardboard, each of which had their own amount of student loan debt written, in a demonstration of the extensive impact that increasing tuition cost has caused. However, to this Greenstein starkly replied with, “I am doing nothing to advocate for free college. I am not advocating for free college,” to which public outcry ensued.

Another topic discussed was PASSHE’s current plans to advocate for diversity in the educational system and address concerns about a lack of diversity in both enrollment and employment. Measures discussed included the current use of the Systemwide Campus Climate Survey.

“We’re really interested in getting a read on what the state of the climate is on this campus and that will help us understand what kinds of conversations we should be having,” said WCU President Christopher Fiorentino, regarding the survey currently underway.

However, one of the more contested topics voiced by members of the audience was the consolidation of 6 of the 14 PA public higher education universities that has begun in recent months. The consolidation consists of Bloomsburg, Lock Haven and Mansfield Universities becoming one entity in the Northeast and Edinboro, Clarion and California Universities combining in the West. With this movement there are a great many concerns, one of which being the large number of faculty and staff who will be laid off as a result.

“What’s going to come out of this is at least 1500 jobs within the state system that are going to be lost. It’s important to me because I support my faculty colleagues across the state that will be losing their jobs,” said Dr. Curry Malott, a faculty member of the Department of Educational Foundations and Policy Studies here at WCU and a member of the People’s Congress of PASSHE. The People’s Congress of PASSHE was involved in a number of protests this past summer, taking a definitive stance in opposition to the integration.

Other concerns for the consolidation include the decreased accessibility of higher education that it will create for some students. “If you’re far from [the university] you’re just going to have to do the online classes and that’s unattainable for a lot of students, and during the pandemic that really kind of revealed itself,” said Malott.

PASSHE cites the fact that there has been a drastic decrease in Pennsylvania higher education enrollment as justification for the integration. However, the neglect of consideration for other factors that directly impact students such as rising tuition costs, the quality of education, as well as the impact upon laid off employees causes the integration to remain in controversy, being opposed to by many in PA.

Olivia Schlinkman is a first-year Psychology major with a minor in Studio Arts. OS969352@wcupa.edu