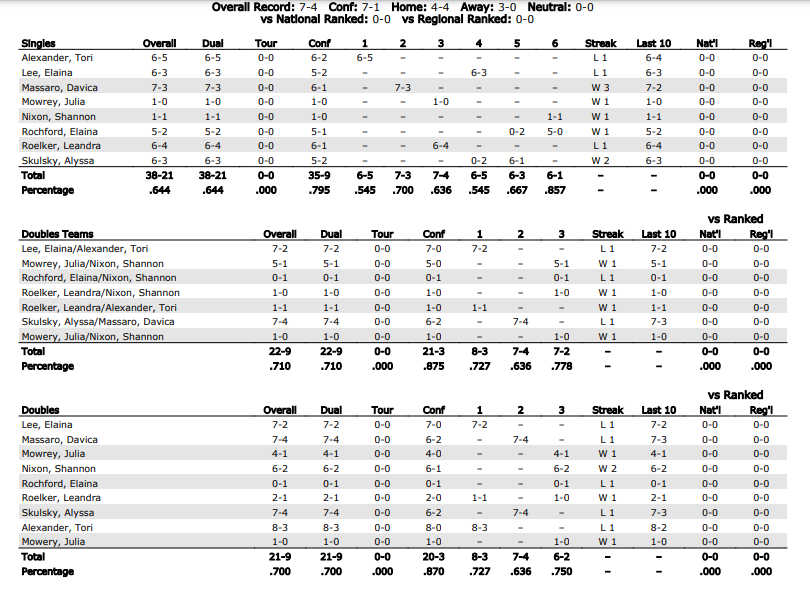 The brutal February cold reminds us that we are beginning another spring semester here at West Chester University. New professors, new students and so many things to do now greet us now that we are back on campus. Though it may feel brisk out there as we begin to get settled in, we can always look forward to the warmer weather and, with it, the college experience we have grown to love or have yet to fall in love with. Yes, indeed the leaves will begin to bud, the temperatures will sit comfortably in the fifties and sixties, and our spring sports shall commence once more.

One of these budding spring sports is the Women’s Tennis Team who are looking to reach the PSAC semifinals for the seventh time in a row under the coaching of Tina Tharp. Tharp enters her fourteenth season as the head coach of both Men’s and Women’s Tennis and is seeking to continue the recent dominance of the program which has seen an impressive turnaround since her hiring in 2008. In 10 of her 13 years, the women’s team have made at least the PSAC semifinals, with two of them ending in appearances in the NCAA Regionals.

However, the season was far from a complete one as yet again; the COVID-19 pandemic made its presence known on the university’s sports.

The team was last able to complete a full season in the 2018–2019 semester, leaving them with a difficulty in creating long lasting bonds and trust in each other.

Tharp touched on this point stating that, “the emphasis is more on team bonding and being there for each other on and off the court so that when we are in a tough match they know how to support each other and know that that support is genuine.”

This year’s roster will see four seniors depart and new leaders emerge to fill their spots. “Losing four Seniors is tough,” Coach Tharp said, “especially when your roster is so small.  They were on some successful teams…Their experience will be missed. Their leadership is lost.  As we move through this season, this team will need to learn what those Seniors learned.”

Tori Alexander, Elaina Lee, Gabriella Lerario dos Santos, Davica Massaro, Amber Nguyen, Yuno Oe, Flavia Rodas and Alyssa Skulsky will take to the court March 12 to take on Chowan University kicking off a season that will hopefully meet (or exceed) Tharp’s expectations of “win[ning] the PSAC East again and try[ing] to move [their] Regional Ranking into the top 6.”

From what Coach Tharp has told me and the winning culture obviously present with this team, there seems to be much to look forward to for this spring semester in Women’s Tennis.