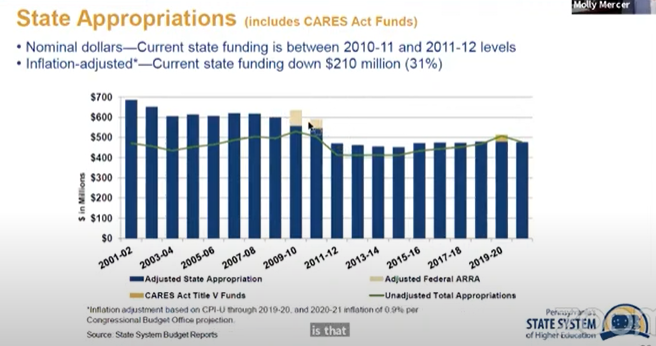 For those that might be unaware, the Pennsylvania State System of Higher Education (PASSHE), of which West Chester University is one of the state-owned institutions in that system, has been continuously underfunded. Remember, this is a publicly state-owned institution. Yes, you read that right, publicly state-owned. In comparison, Penn State is state-related. One would think that publicly state-owned means the state fully funds these institutions. For instance, think of your local town, city or county public library which is fully funded and is granted to all residents/taxpayers to utilize their services. Or, think of your local public schools, which are free at the point of service to those in grades K-12. However, even with that status of publicly state-owned PASSHE isn’t operated anywhere close to the same way. In fact, we have continued to shift the costs from the state to students. For instance, PASSHE in 2000 had about 96,000 students in total and in 2019 had 95,802 students. Yet, from 2000-2019 funding was decreased 31% in appropriations.

I am not here to ask to make college more affordable, I am here to demand a public library or public K-12 school that is free at the point of service, and that we fully fund these institutions because what I see now is depressing to me. It is no wonder that 14% of PA’s population has Student Loan Debt and that PA ranked third highest in 2019 with student loans. Those with student debt in Pennsylvania have an average student loan balance of $35,804.

This continued underfunding of our institutions needs to be tackled and it’s only through student voices that I see that being done. I ask you the reader to take a moment and realize that the issues you face are due to this underfunding. Maybe it is the lack of food options on campus, the high cost of housing, the lack of sections for a particular class, the student loan debt you hold and more are due to this underfunding. Consider reaching out to your state representative to demand, not ask for, a fully funded state system of free public higher education. Similarly, please try to include this QR code and wording it like this: “I have directions here for how to find your legislator and a sample letter to send.”

However, that step is not enough because for them to listen to us, we must have power. For those who want to join me and others in demanding a fully funded state system of free public higher education, consider checking out @defenderspasshe on Twitter. Also, check out the People’s Congress of PASSHE website, congressofpasshe.org. Additionally, check out the Debt Collective on Twitter @strikedebt.