UDC’s “Resurgence” to the Stage 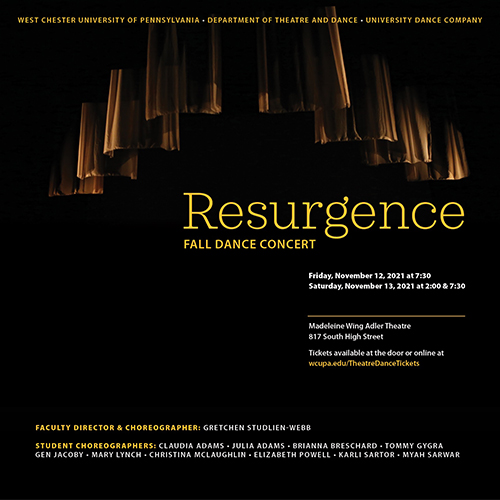 Almost two years of remote and adaptive, outdoors performances have gone by, and West Chester University’s Dance Company (UDC) is finally making their return to the stage in Madeleine Wing Adler Theatre. “Resurgence” is such a fitting title for the fall dance concert as the choreographers, dancers and creative team work diligently to put together an epic staged production. After getting a sneak peek into the rehearsal process, it is true enough to say that this is a show you are not going to want to miss. Christina McLaughlin, senior choreographer, dancer and vice president, says that “‘Resurgence’ is going to be one of the best concerts that UDC has put on since I first joined the company in 2019. There is so much variety between the dances and everyone is bringing their A-Game: it’s impressive.”

There are 11 pieces in the concert, 10 of which are student choreographed. Without a doubt, there is a piece that will resonate with everyone in the audience. The cast and crew of “Resurgence” is so excited to bring you an incredible production overflowing with talent and creativity.

The concert showcases a large range of styles of dance within the student-choreographed numbers. Contemporary, jazz and tap pieces can all be found within the same show. Each dance also has its own concept and aesthetic that will evoke many emotions from the audience. Some dances have a very upbeat, feel-good energy like the tap dance “TWPK” choreographed by Julia Adams, as well as a contemporary titled “Eden” choreographed by Elizabeth Powell. The audience is sure to vibe with the energetic dancers on stage. Darker themes and dances can also be found within “Resurgence.” Tommy Gryga is choreographing a contemporary that is about losing the self-identity to present day technology. Myah Sarwar is another choreographer depicting an intense concept of a diabolical duo hiding something from the audience. These and many other dances are sure to have those watching on the edge of their seats. Although there is so much variety between the dances, many similarities can be found between all of them. Each piece was envisioned and created with so much passion that it will just radiate off the stage. It will be apparent to the audience how much this concert means to all that are involved with it: whether cast, crew or choreographer. This is some of the best work to grace the UDC and will be worth the audience’s time!

You can see a performance of “Resurgence” on Friday, Nov. 12 at 7:30 p.m., as well as Saturday, Nov. 13 at 7:30 p.m. with a matinee at 2 p.m. All tickets are $12 and can be purchased at www.wcupatix.com or first come, first serve at the door. West Chester University students even have a special performance viewing opportunity. Students are invited to the dress rehearsal on Thursday, Nov. 11 at 7:30 p.m. for only $5 when they present their Ram ID. Don’t miss out on UDC’s iconic return to the stage with “Resurgence!”