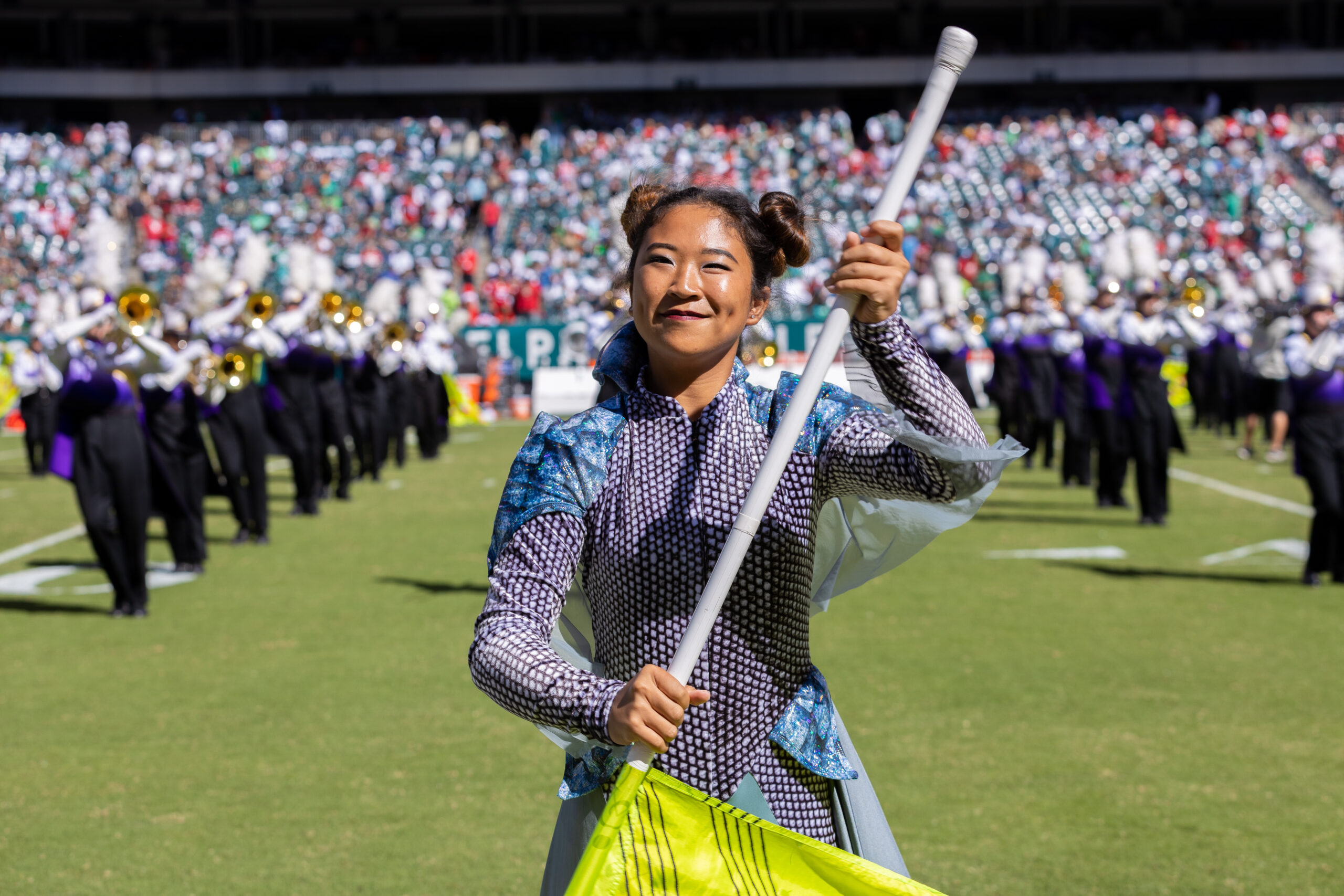 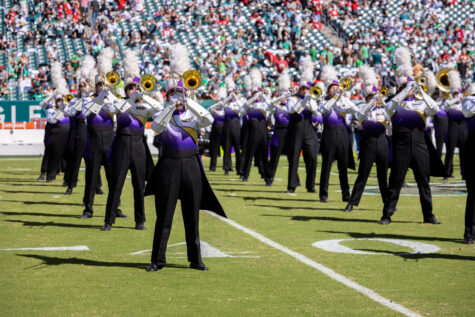 On Sunday, Sept. 19, 2021, West Chester University’s Golden Rams Marching Band got their golden ticket to the national spotlight: representing the university by flying with the Eagles at their home opener against the opposing team, the San Francisco 49ers.

Also known as the “Incomparable” Golden Rams Marching Band, the band was the last one to perform halftime for an Eagles game pre-coronavirus. This performance was on Lincoln Financial Field back in January of 2020, during a playoff game against the Seattle Seahawks. Following this game, COVID-19 led to worldwide shutdowns, resulting in a lack of halftime show performances for the duration of the 2020–2021 NFL season.

The Golden Rams are the first ensemble to be invited back onto the Eagles’ national stage to shine at halftime.

When asked about the moments leading up to the performance, Adam Gumble, Director of Athletic Bands at WCU said the following: “The anticipation is what makes the experience so exciting. You never know what kind of environment you’ll be walking into due to what happened in the football game itself before halftime, so hearing the crowd noise in the tunnel right before we go onto the field is really an emotional rollercoaster.” 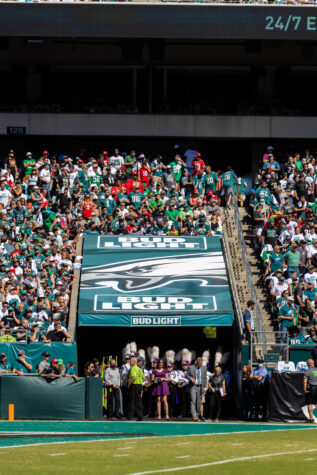 The halftime show ran for five minutes, beginning with the band arranging themselves across the field to form the letters “WCU.” The performance was an amended version of what the ensemble typically performs before every WCU football game: the musical selections of the halftime show showcased West Chester University’s fanfare featuring an Eagles chant, the chorus of “Living On A Prayer” by Bon Jovi and an arrangement of the Eagles’ fight song as the conclusion. The arrangement, according to an article on WCUPA.edu, is said to be a “new arrangement by Andy Yozviak, a WCU Wells School of Music professor and director of bands.”

Gumble describes his favorite moment to be the band’s excitement during the show. “I love to stand on the sidelines and watch individual performers light up as they get the opportunity to impact an audience,” he expressed, “That’s really what this activity is all about, and I enjoy getting to experience those moments and watch our members grow as performers each weekend.”

“It was cool,” said Matthew Shimkonis, a member of the front ensemble. “We have performed there before, but seeing all the stands, seeing everything from the bottom — a stadium of 60,000 is larger than life.” 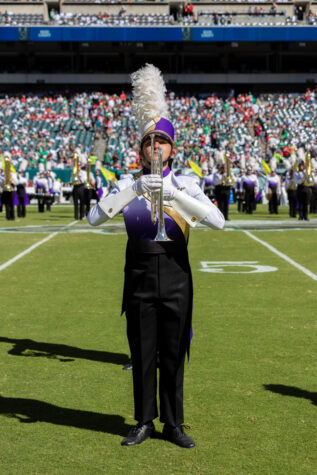 The band has over 300 members who, until now, are said to have been practicing separated from one another and within small groups. Donned in their purple and gold uniforms, they performed in front of an audience of over 60,000 people. In a feature by FOX29 about the performance, Gumble stated, “We’ve been saying for a long time around here that when nothing is certain, anything is possible.”

As for the near future, Gumble said that they are looking forward to this coming weekend: “Homecoming and the Collegiate Marching Band Festival in Allentown are two of our favorite events each year, and to have them back to back next weekend will be extremely special!”

Founded in 1889, the Golden Rams Marching Band has performed at the football games of several national teams, including the Philadelphia Eagles, Pittsburgh Steelers, Washington Football Team, New York Giants and New York Jets. In addition, they have showcased their talent during the Thanksgiving Day Parade of both New York (Macy’s) and Philadelphia, as well as during appearances at the Philadelphia World Series. The band is also a regular performer at special university and community events, regional exhibitions and WCU football games.

During Gumble’s first year as the Athletic Bands director, the Golden Rams Marching Band earned the 2019 Sudler Trophy following an exhibition at the 2018 Bands of America Grand National Championships. According to the Sousa Foundation’s website, the trophy identifies and recognizes “collegiate marching bands of particular excellence that have made outstanding contributions to the American way of life.”

To those who may be interested in WCU’s Golden Rams Marching Band, Gumble urges even non-music majors, such as those who participated in performing arts in high school, to check out West Chester University’s opportunities on its website. To those who are interested in RamBand, the “Sixth Man” Basketball Band or WCU’s Concert Band, Gumble encourages reaching out to him at AGumble@wcupa.edu.

Julien Padillo is a fourth-year Media & Culture major with a minor in Digital Marketing. JP913571@wcupa.edu