I started drinking coffee around age 16 after a trip to the largely French-influenced city of Quebec. Funnily enough, the first “coffee” beverage I tried was a caramel frappe from a McDonalds we had stopped at during the trip. That is, unless you count the few sips of my Dad’s coffee here and there. Anyway, after returning home, my sister introduced me to the widely-known caramel iced coffee with cream and sugar from Dunkin Donuts. As cliche as it sounds, the flavor was unlike any drink I’d had before, and I was instantly hooked.

Coffee to me is more than a drink. There is something calming about a coffee shop. Perhaps it’s the aroma of coffee beans when you first walk in, or the simplistic interiors of the shops itself, but overall, it exudes a welcoming vibe. The smell of coffee, to me, is quite possibly just as satisfying as the taste. It reminds me of my favorite place, Disney World, and waking up to the smell of coffee throughout the resort. It reminds me of an early morning beach trip and breathing in the coffee and salt air. It reminds me also of Barnes and Noble — picking out a book with the smell of Starbucks lingering about.

So yes, as you could probably guess… I really like coffee.

That being said, I had to try some of the coffee shops here in West Chester, PA. I couldn’t quite get to all of them, but here’s my thoughts on the ones I did try…

Located right off Gay Street, this smaller coffee shop was the first I visited. I ordered the “Iced Mexican” with cream and sugar. The price came out to $2.75, so Fenn’s is on the more affordable side of coffee joints. The coffee was flavorful, though in ordering the Iced Mexican I was hoping for a more unique flavor then your typical brew. I will say this coffee was on the plainer side and was a tad watery. The shop itself had a pleasing exterior and a dark, quiet interior that would make for a nice place to do work. Overall, I would give Fenn’s a 7/10. 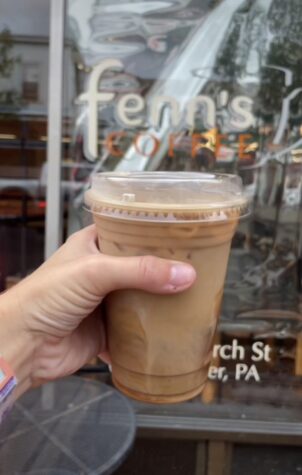 Walking into Gryphon, I could tell that it was fancier than most coffee shops. The menu offered a diversity of drinks, and flavors, ranging from coffee, tea, hot chocolate, and more. I ordered a Nitro Cold Brew with caramel, cream and sugar, paying an upwards of $5 dollars total. Having only ordered a 12 oz drink, I don’t think it was worth the price. However, the coffee was very good. The flavor wasn’t too overwhelming and was paired with a pleasant ratio of cream and sugar. It was a more unique flavor than most cups I’ve had, with a smooth, sweet taste. The inside of the shop had a variety of seating options, perfect for doing some work with the accompaniment of a drink. Gryphon Cafe gets a 7.5/10 from me.

Out of the four places I tried, this was my least favorite. To start, I thought the coffee was overpriced, coming in again at around $5. I ordered a cold brew with caramel, cream and sugar. The cold brew was the strongest out of the four drinks I tried, and it seemed that no matter how much sugar I put in, I could not mask the bitterness of the drink. Being a coffee bar, I added the cream and sugar myself. It could be that it was just user error. If you like a dark, bold coffee, I would absolutely recommend Carlino’s, but for me, it was not enjoyable. Perhaps their other drinks are better. I would give this drink a 4/10.

One of my favorite things about walking into La Baguette Magique was that it smelled like a French bakery. I asked the barista for the most similar beverage to an iced coffee, and I believe she gave me an Iced Americano but don’t quote me on that. Along with the drink, I got a chocolate croissant, and my total was a little over $5. The drink was espresso-based, and after adding a little bit of sugar, I really enjoyed it. It was smooth — not too bitter — and affordable…a win for me. The sitting area was very open, and there weren’t too many people, making it a very calm environment. Overall, 8.5/10. I would say La Baguette gets first place.

Trying these coffee shops was a great experience and I had a lot of fun doing it. Not only this, it’s beneficial not only to yourself, but to the community to support local businesses in town. If you get the chance to go out and try new places, take it! Who knows, maybe you’ll find your new favorite spot!