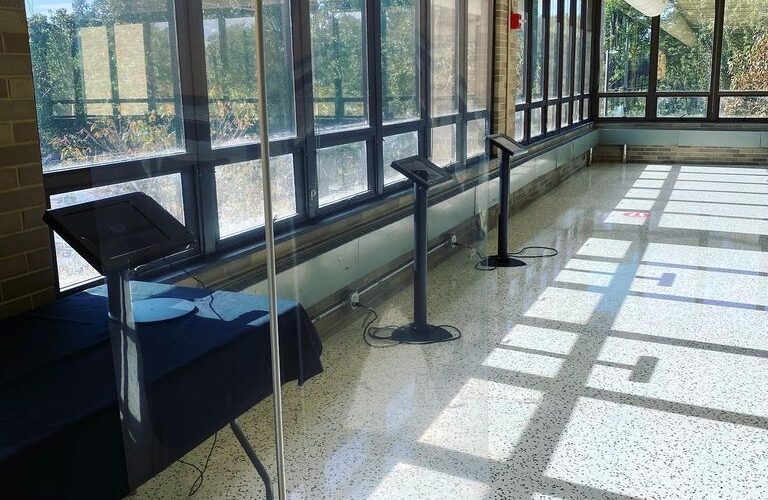 Four percent: higher than your average mortgage rate, lower than your average homeless rate and almost exactly the percentage of American men named James. Four percent also happens to be the ratio of undergraduate West Chester University students who are currently living on campus, all of which reside on South Campus. Despite this number’s underwhelming appearance, the achievement of it is monumental in the context of a global pandemic. WCU’s South Campus Apartments are a gated community of students, staff and security. There, entrance is policed, weekly COVID-19 testing is mandatory and any problems are unprecedented at best and systematically detrimental at worst.

When the students of West Chester University were all sent home in the spring of 2020, confusion and questions ran rampant. Everyone seemed to have their own unique problems and reasons why these unprecedented times hurt them in ways unlike anything else. For a large group of students, these problems boiled down to the fact that West Chester provided them a service that could not be transmitted online. All students deserve to enjoy the spoils of a standard school year, but for hundreds of them — music scholars, athletes, in-person educators, etc. — online learning is borderline worthless.

The solution? Bring them all on campus, spread them out, test them every week and enforce rules strict enough to ensure safety but reasonable enough to avoid indignation. Today, the South Campus Apartments are home to “upwards of 600 students” per Barry Hendler, Associate Director of Residential Programming at WCU. South Campus housing is eligible for “Promise Program students, proven hardship cases, academic placements (i.e. student teachers, clinical placements and internship sites), students with in-person engagements and challenging home learning environments.”

Systematically and accurately testing 600 students is a monumental task. To pull this off, West Chester University paired with EMS Medical Management, an independent medical organization composed of “healthcare professionals and business experts” according to their website, which was born in 2020 as a for-hire response to the coronavirus pandemic. Their team of nurses and doctors have since set up in the South Side Cafe, a one-time dining option for South Campus students, turned into a full-blown medical center. There, a security guard sits perched at a cleared off check-out counter, and the chairs of the once-filled lounging area have been pushed aside in exchange for sets of folding tables, each manned by masked and gloved nurses, wrist deep in swabs and appointment forms. I got the chance to sit down with one of these nurses during my visit to the clinic. According to her, students who wanted to join the South Campus community had to be tested twice, once before arrival and once upon arrival, and an additional third time for out-of-state students before entering Pennsylvania. She went on to explain that all students are “assigned a time and day” and are tested “weekly,” resulting in the clinic, which operates from 9–5 p.m. on Monday, Wednesday and Thursday, seeing “about 200 students a day, three days a week.” As impressive as that may be on such short notice, no system is without flaw — no machine without grit — and it is times such as this when we remember that there are no experts on the COVID-19 pandemic who have known of it longer than any of us have. For every student praising the diligent work of EMS staff, there seemed to be another with other stories, and the closer one looks at the machine, the more strained it appears.

The first sign of worry appeared on the last day of the first week of testing on Feb. 4. By the end of the day, the nurses of South Side Cafe reportedly ran out of available tests, time and resources. “I arrive at 4:05 p.m., enter, and the guy walks up to me and says, ‘Sorry man we ran out of tests, we aren’t doing anymore. You’ll have to come back on Monday,’” said Joe Wolf, a second-year music education student and one of the unique 600 living on South Campus. Wolf told me that he “[had] not gotten a weekly test” and that “anyone scheduled at 4:00 p.m. [that day] had not gotten theirs.” While my experiences at the testing center would seem to suggest that this problem has been remedied, it still raises questions about the system’s capacity.

Other students flagged managerial problems. Ben Davan, another music major residing on South Campus, reported that a simple miscommunication with the school almost got him kicked off campus. “They sent [me] an email to schedule a time to get your COVID test, but… it got lost in my inbox,” said Davan. “So the school assigned me a time for 9 a.m. on Monday, which falls right when my first class starts… I put in a formal request to get my time switched and they never got back to me.” Davan went on to say that he chose to go to class, as opposed to missing his test, and reported that the next day “[he] got an email from [the university] saying that [he] got a warning for not getting [his] test and next time they would kick [him] off campus.” Other reports have rumoured at students being allowed into the community without getting tests and a series of other large, silhouetted question marks.

There is no doubt that the stories of success outnumber the tales of turbulence, but no amount of mystery brings comfort when the lives of hundreds are on the line. Only time will tell if these off and on flaws manifest into something greater. For now, the South Campus community stands as a blueprint for university boarding during a pandemic, and every semester, WCU looks to build back to its once vibrant state of normalcy.