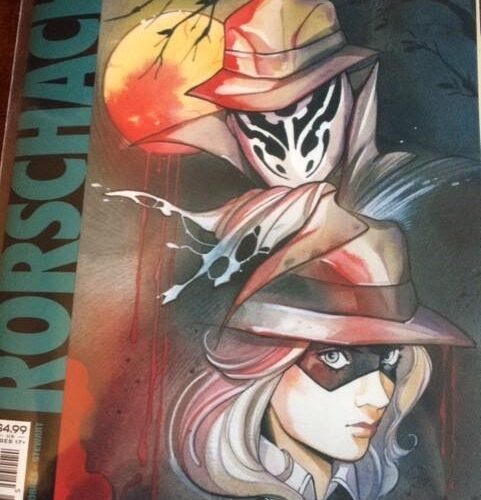 “The comic succeeds in escapism and depth but lacks in progressing action.”

Hello, fellow readers, to another comic review which I will be discussing the second comic on D.C’s “Rorschach.” For those that have not read the first comic, I suggest reading it prior to this review. Based from my previous review, the comic stars a lone detective as he tries to uncover the hidden mystery of Rorschach. Though the viewer does not know the name of the lone detective or Rorschach, it is understood that there might be a suspect tied to the Rorschach case.

After reading the second comic of “Rorschach,” I noticed that there were many positives. For starters, the story has better depth to the plot. Unlike the first comic that gives broad details and overview, the second comic builds off what the first left off. Another positive is the artwork. Halfway through reading the comic, there was a point where I felt like I escaped into the comic world based on seeing a drawing of a comic. The third positive is that the comic has a major theme throughout. In contrast to the first comic, the second comic’s theme leans more towards conflict. The last positive is that the comic does a good job in setting up the beginning and end to correspond to the actual apartment to symbolize the detective’s investigation.

Other than the second comic’s positives, there are several negatives that I notice throughout. The first issue is that the comic still leaves unanswered questions about the detective’s case. Some questions that came into my mind were: who was the detective talking to before and after his investigation, and why in the artist’s apartment and not at the crime scene? Another issue I have with the comic is the main character’s profession. Though I enjoy a good detective comic, I am still uncertain as to what particular role the detective actually plays in the comic. Is he a good guy or just some expendable individual that awaits his death? The last issue I have with the comic is that the comic has too little action. Though the first comic sets up the action, the second comic dials down on action and moves toward inner conflict. As a comic and action film fan, action is the best way to grab the attention of the viewer, but as I read the second comic, there are some parts that had action but not enough to capture the attention. Despite its flaws, the second comic is a success.

Overall, the second issue of “Rorschach” did a fantastic job with depth, artistry, drama and escapism, but lacks in deep action. For that, I give this comic 3.9 out of 5 stars. ‘Till next issue, this is Nicholas Bartelmo signing off from Cinema Perception.

“‘Nobody’ captivates similar elements to ‘John Wick’ in action and plot, but falters in creativity.” Hello fellow moviegoers, and welcome to the last film review on Cinema...

With the huge music scene in West Chester, Pennsylvania, many up-and-coming artists have been able to use the scene as a platform for their talents and their messages: for 19-year...

After such a terrible school year where everyone was trapped in the confines of their homes and could rarely — if ever — leave them, it’s good to remember that things are still...

As we continue to move forward in evolving entertainment, it’s hard to understand what will become of what things used to be. The internet brings us so many things, but it takes...

The rise of streaming services has seen a lot of theaters partner and do simultaneous releases of films, especially more recently. However, with such a rise of simultaneous...

“Forget history and it will repeat itself” is often something you hear in history lessons due to its poiniency in how accurate it is. Often, people will completely forget how...