What it means to be a republican 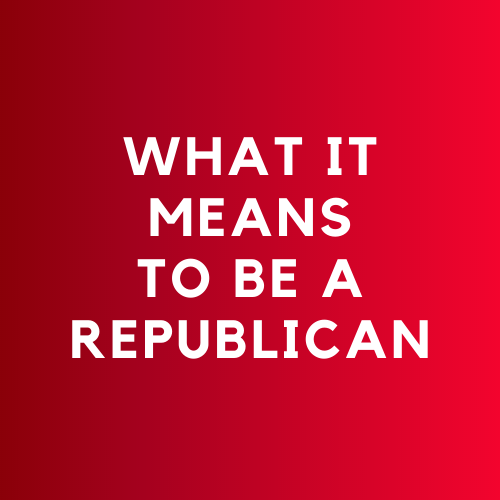 In a country like the United States that uses a two-party system, it is important to understand what each party stands for. In this article, the topic of discussion will be what it means to be a Republican. Going into this article, it is imperative to know that anything to do with our definition of a Republican is based on multiple opinions and is not ultimately set in stone. This article will be a good setup in beginning to understand the ideologies that go into being a Republican, but in the end, it is based on opinion and what is relevant today.

Generally, to be Republican is to be neoliberal: to believe in individual agency and  rugged individualism and to prioritize individual rights. The Republican mission is in the preamble to the Constitution: to secure the blessings of liberty for current and future generations. This priority of liberty has intensified as the libertarian presence in the party has increased. This value of individual rights manifests itself as a preference for a very minimal government that performs only a few basic functions to keep the country functioning.

While the main ideology associated with Republicans is conservatism, there is a strong presence of libertarians and populists. Whether you are liberal, conservative, libertarian or for populism, you can find a home in the Republican Party. When taking a look at the Republican policy list, you can see that policy agendas stem from a core value of individual liberties.

Some general Republican policy goals include a strong, leading American presence in the world; free markets with less regulations; conservation of the environment for hunting and natural beauty; protection of all rights in the Constitution for each American and fewer taxes so all can strive for the American Dream. It is apparent that many Republican policies focus on less government in areas that directly impact the individual, like taxes, and some government in protecting land and rights for each person to appreciate.

The moral philosophy of the Republican Party does vary depending on the person, but generally supports a freer society. The society they support has little restrictions on economic institutions, more rights for the people and a strong America on all levels. Morals are important to Republicans, from having the right to protect your own life to ensuring the right for others to live theirs. This is also a party of traditional values, especially when it comes to family.

Fiscally, Republicans favor minimal government intervention in the economy (laissez-faire policy) and low taxes. Generally, Republicans in the libertarian wing believe that a flat tax rate of 15–20% for all Americans is best for the country, citing the Laffer Curve. However, as more populists have entered the party, bringing their resentment of rich elites, the current progressive tax system has gained acceptance in the party. Populists in the party have also brought increased support for economic protectionism, in which the government protects blue-collar jobs through tariffs and regulation of technology and labor supply.

Republican principles of liberty also apply to education: most Republicans favor school vouchers, giving parents the freedom to choose what school their children go to. Republicans also oppose free college tuition on the basis of liberty: the belief is that people should have the liberty to decline to pay for college and not pay through taxes.

Regarding the military, Republicans generally favor a stronger military in order to protect the freedom and safety of Americans. In the past, especially before 2008, Republicans favored greater military intervention in the world in order to eliminate threats to America proactively and to foster greater freedom in other countries, even if it required intervention. In recent years, though, talk of “endless wars” has moved much of the party to favor libertarian isolationism. The party used to favor a strong military with interventionist policy but has shifted to support a strong defensive military that interferes little with foreign countries.

Adam Reiland is a third-year English Writings major with a minor in Business and Technical Writing. AR919402@wcupa.edu