My presidential forecast of the 2020 election 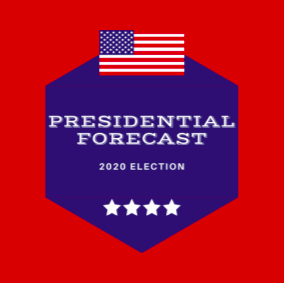 Scared by 2016 polling, fearing what the future brings and wondering if debates are still a thing with rules, the 2020 presidential election is coming to a close. In these closing days, the question is: who is going to win? Well, with new polling, a professor that holds the keys and following the money trail, I am putting forth my 2020 presidential election forecast.

The first thing, and most major component of my forecast, is polling. Polling is not an exact science: it is a statistical analysis of small samples of the overall population. It is done in hope to find a good guess, with some margin of error, as to what the most likely outcome will be or could be. The 2016 presidential election was no fluke; in fact, Donald Trump had a great statistical chance of winning the presidency.

My favored polling website, FiveThirtyEight, gave Trump about a one in three chance of winning the presidency back in 2016, a pretty good chance at winning the presidency, which he did. But what about the polling errors in key states that led to a Trump victory? Well, Trump’s victory in all states he took from Hillary Clinton were not only within the margin of error but by incredibly slim margins. Those slim margins emphasize the importance of voting, as the entire rust belt — Pennsylvania, Michigan, and Wisconsin — only went to Trump by less than 80,000 votes total. So vote!

Polling today, as supplied by FiveThirtyEight, has Joe Biden at an 89% of winning, a 1% chance of an electoral tie and Trump at a 10% chance of winning. Today (Oct. 30, 2020) is the lowest Trump’s chances have been during this entire election and Biden’s highest. What this means is that both candidates have a chance at winning, but Trump is at an incredibly significant statistical disadvantage.

FiveThirtyEight also breaks down the most electoral college scenarios and is reliable due to their averaging of most highly-rated polling to ensure the best guess with the smallest margin of error. For fellow Pennsylvanians, the website has Biden’s chances of winning PA at 86% and Trump’s at 14%. A better percentage for Trump when compared to the national polls but still not the best, nor where it should be for an incumbent.

My next metric is betting odds, brought by RealClearPolitics. Betting odds basically means people are putting up actual money, betting on who they think will win the election. This is an important metric because when someone puts up their own money, they are less likely to follow partisan bias towards the candidate they like. People who bet are doing so on the candidate they think will win so they will in turn win money and not lose it.

The betting odds are where Trump fairs a little better, with 34.9% of people betting money Trump will win reelection. Biden, although not at his highest point, is at one of his highest at 64.1% of individuals betting money he will win. In 2016, Clinton had an 88%, and Trump had a 13%. What does this mean? It means a lot of people got burned on the prospect that Clinton was going to win, so they are more hesitant to vote for Biden, even though he has a better chance of winning than Clinton did.

One other polling that had Trump higher than most during the 2016 election was The Economist. In 2016 Trump had a little lower, but around the same, percentage chance FiveThirtyEight gave him. The Economist has Trump’s chances at 3% and Biden’s at 97%. So, the polling all points towards a likely Biden win, but there is one more thing.

Attached with the rest of the links is a YouTube video that has Allan Lichtman, a professor at American University that has successfully predicted all the presidential election winners since 1984. He even predicted Trump’s victory in 2016. And now with his 13 keys, which you can learn more about in the short video, he predicts that Biden is going to win.

With all the polling, betting and predictions, there are certainly things that can throw everything into the opposite direction. Should there be voter suppression or low voter turnout, the election could go into a completely different direction than predicted.

All conclusions in this article were based on information available on 10/30/2020.