How Pennsylvania could decide the 2020 presidential election 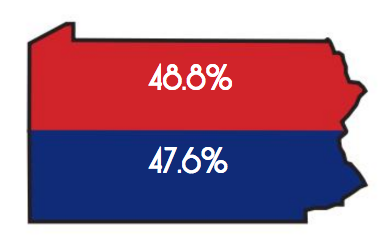 Pennsylvania, one of the country’s most highly contested battleground states, could have the deciding vote when it comes to the winner of the 2020 presidential election.

With one day to go before the Nov. 3 presidential election, it’s looking like Pennsylvania is the most important state in the country. If Trump pulls off a come-from-behind victory, it’s likely to come through Pennsylvania — one of the three states he won by less than one percentage point in 2016 and the one that’s currently still within range for him to snag.

However, the importance of winning Pennsylvania lends itself to both nominees –– President Trump and former Vice President Biden. According to FiveThirtyEight’s article series examining the politics and demographics of 2020’s expected swing states, “Pennsylvania is by far the likeliest state to provide either President Trump or Joe Biden with the decisive vote in the Electoral College: It has a 31 percent chance of being the tipping-point state.”

With just under a week before Election Day, The Upshot’s polling average shows Joe Biden with a seven-point lead in Pennsylvania. Looking at other swing states, that’s slightly narrower than his polling leads in Michigan and Wisconsin but wider than his leads in Florida, Arizona and North Carolina. As a result of these close numbers, if the election comes down to one state, the high probability is that it will be Pennsylvania.

Continued problems have risen from the number of undecided voters and the changes in Pennsylvania’s mail-in voting laws, which have led to confusion for voters and election workers alike. There’s also been a pattern of litigation from both the Republican and Democratic parties and subsequent electoral chaos in Pennsylvania; one of the biggest challenges is going to be verifying and counting the record number of mail-in ballots, which has led to fear that Pennsylvania is going to be the “Florida” of the 2020 election.

Emma Bickerstaffe is a fourth-year English Writings major with a minor in Journalism. EB891492@wcupa.edu