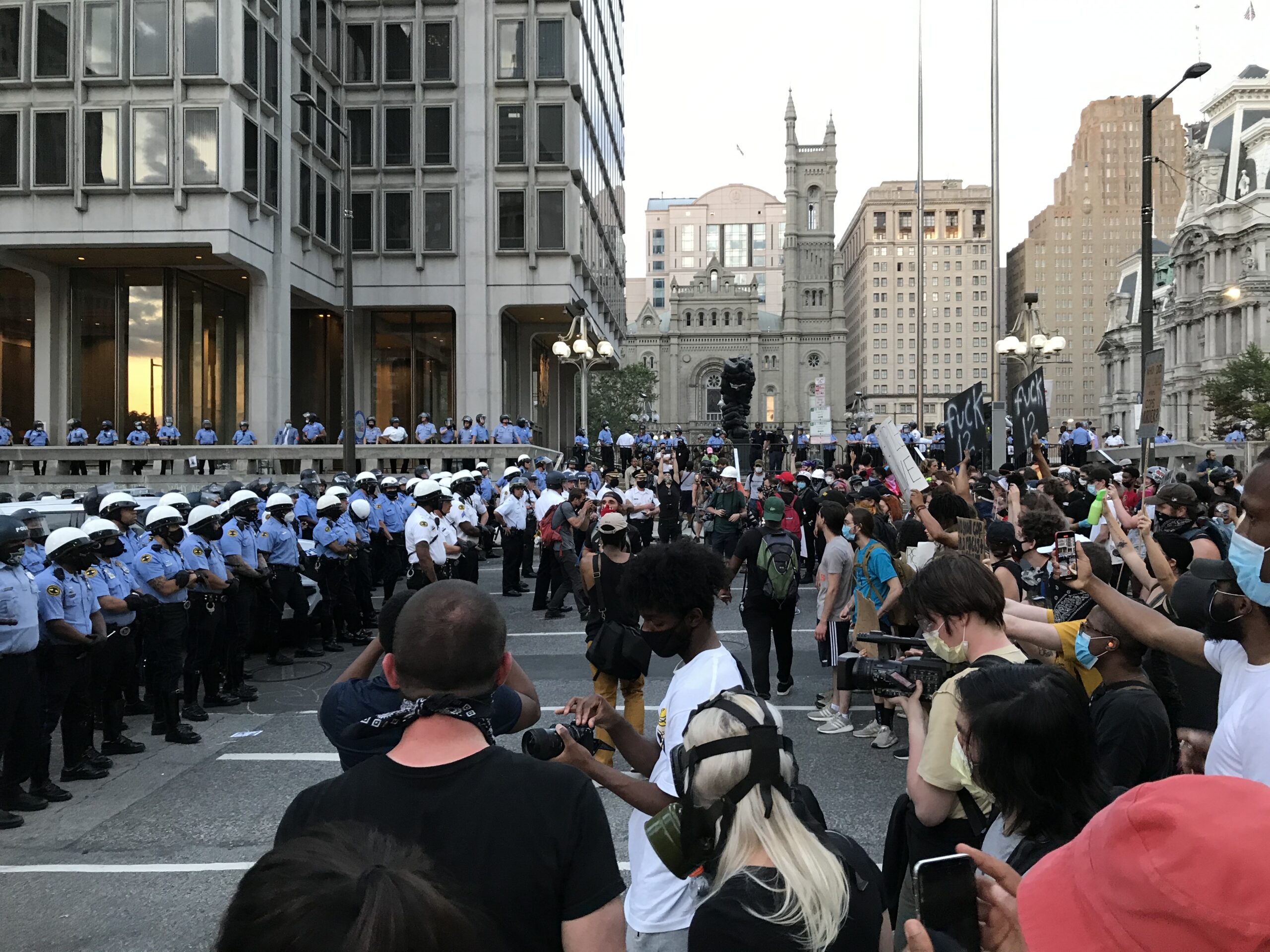 Photos of Philadelphia Protests in 2020 taken by Brendan Lordan.

I switched my phone back to airplane mode and returned my attention to the area beyond the fence, where National Guard troops hoisted riot shields, entering the center stage of the police line from parts obscured by fat, tan troop transports. A woman to my left wearing a black tank top and a backpack continued speaking, unbothered by the mounting crowd of riot police, to a few of us standing nearby. “They boxed us in. I’ve got my court date in a few weeks,” she said. She mentioned something about tear gas and gestured to a set of snow goggles hanging from her backpack. Many among the crowd had similar stories of the event that took place only a few days previously, where police had used tear gas and pepper spray on a crowd of peaceful protestors that had stopped traffic on a section of Interstate 676, many of whom were trapped between police lines and fences along the highway. A few weeks afterwards, on June 25, Philly Police Commissioner Danielle Outlaw would say that she was “extremely disturbed” and “sickened” by the way the event was handled and declare a moratorium on the use of tear gas to disperse protestors.

The date was Saturday, June 6, and as far as Philly police were concerned, tear gas was still very much fair game.

My arrival at the protest was more indirect than I’d like to admit. I had tried to organize a trip to Philly with a friend the weekend before, when the first large-scale protests against systemic racism in the U.S. police system began in the city. The trip had fallen through, and I had relegated myself to smaller, local protests as I tried to find someone to accompany me into the city. As another weekend of protests neared, I found my potential protest partners still inundated with work. Frustrated, claustrophobic and alone, I set out Saturday morning on I-95 just to see what I could find in the city.

As a quick (and probably unnecessary, considering you likely possess a great deal more common sense than I did that morning) disclaimer, this was an extremely unsafe way to enter a protest situation for a number of reasons. If you plan on joining a protest where you may be detained or endangered, never go alone, let someone at home know where you’re headed, don’t leave your car in a two-hour parking zone, write important phone numbers on your body and wear something a little more protective than a t-shirt and jeans. That said, I was only planning to look around for a few minutes. Definitely not 10 hours.

As I neared the city center, I saw the first of many National Guard troop transports parked in a lot. Next to the truck, a small group of soldiers stood idly, holding assault rifles and looking across the road. I pulled up to a red light next to the soldiers and followed their eyes to the opposite corner where a woman stumbled along the sidewalk, confused and naked. The light turned, and I drove on, the troops still standing, staring. 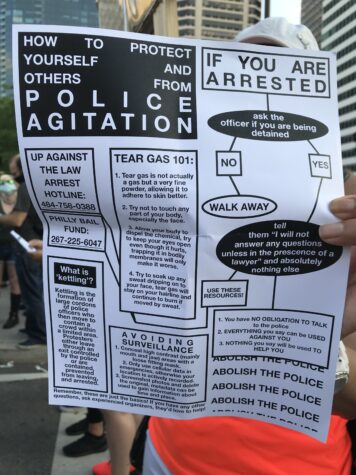 Along several blocks of Vine Street, police cruisers blocked traffic towards City Hall. I parked and followed a trickle of protestors west along Arch Street, where it spilled out into the concourse between Love Park and City Hall. The crowd was several hundred strong and made up of people as widely varied as the city itself. Not only were those present diverse in the ways diversity has often been assessed within the movement, like gender, race and age, but also, as I would discover in my conversations throughout the day, in background, occupation, class, orientation, family and hometown. Families, parents with children and elderly passers-by wove through the crowd as the demonstration continued into the afternoon. The heart of the protest, which was organized in response to the killing of George Floyd, held just as wide a range of foci within the movement, including advocacy for Black trans and ASD lives and a large variety of platforms for police reform, from defunding to complete abolition.

The police line itself was already tense when I reached the plaza. Demonstrators were packed to the front, trying to minimize contact while still communicating their solidarity against the crowd of police in blue uniforms who stood behind a metal blockade, rifles drawn. By 1 p.m., the line numbered around 20–30 in two rows. Behind the line, a dozen National Guard troop transports in the same dull tan as the one I had seen earlier were parked around the square in front of City Hall. Milling around were dozens of troops, with an unknown reserve sitting in transports or out of view. Over the course of the day, the crowd tried everything they could to engage with the police line: questions, accusations, requests to kneel in solidarity or to join the protest line, encouragement to quit their jobs or rethink the philosophy behind the police system, taunts, chants, songs and more. The entire time, the only verbal communication was from an officer in a white shirt (signifying a rank of Sergeant or above) who whispered occasionally to those on guard. Even when the crowd whipped up into a temporary, impassioned roar when they saw what looked like a Confederate flag handkerchief around the neck of the commanding officer, the police continued standing, staring, instead of trying to de-escalate by communicating.

Those who, like myself, grew up learning about the culture of mass protest from grainy videos of civil rights leaders marching together in suits and stiff dresses may have experienced a brief moment of culture shock seeing the way major protests play out in 2020. A man in clout goggles led chants from halfway up the pole of a traffic light. The emergent leader of the demonstration maneuvered through the crowd on quad skates, directing the passage of megaphones as Travis Scott bumped from a nearby boombox. But beneath the stark modernity of its songs, signs and accessories, the structure of the protest showed the same depth and maturity that carried similar campaigns for justice into the streets and kept them there until change was won.

Because of the huge scale of the demonstration, the street along City Hall had less of a single, unified character. Instead, it hosted pockets of Philadelphians engaged in different methods of protest. At its nucleus, the front line faced the blocked off section of JFK Blvd., continuing to boil with chants and accusations as curfew neared. The line continued up and around the barrier, which stretched towards the South end of City Hall, where the most active protesters were packed 30 feet deep against the metal fences. Outside of the first line, a second, less dense crowd formed, which included many of the families, older protesters and photographers in attendance, along with roving volunteers providing hand sanitizer, water, food and first aid. Further outside, small groups congregated, some around speakers from the local community. The afternoon, while still extremely passionate, was nonetheless an assembly the likes of which I had seen in many smaller scale protests in Delaware County. This one just happened to have dozens of heavily-armed police and military personnel posted up around the square.

As curfew arrived, I looked around to see the families and casual onlookers gone, the nucleic bands of protestors collapsed into a shifting, agitated mass. The demonstration had begun to change with the darkening sky, and I found myself unceremoniously deposited at the threshold of the evening. I texted my brother. I turned my phone off. I waited for the sun to set.

Brendan Lordan is a fourth-year English major with a minor in Journalism BL895080@wcupa.edu