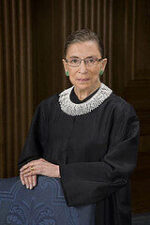 “Justice Ruth Bader Ginsburg” by Cknight70 is licensed under CC BY 2.0

I am sorry that your passing is being transformed into a political debate about the replacement for your position and women’s rights in general. But as an avid supporter of you and your work, I think you already know where I stand on that issue and I will focus on what you really deserved at the time of your passing: peace and respect.

After reading countless articles, learning about you in my high school women’s studies class and watching the movie based on your life, “On the Basis of Sex,” multiple times, one quality of yours that is repeated in almost every piece about your life stuck out to me: resilience.

Although I consider myself to be knowledgeable about your life, I was not aware of how strong you truly were in the most challenging times. You did not miss a day of oral argument in the Supreme Court and continued to serve as a devoted questioner the day after your husband died and while receiving treatment for pancreatic and colon cancer.

You were one of only seven women to study law at Harvard and became the first in your class at Columbia when Harvard refused to give you a degree as you moved to New York. Despite being first in your class, no law firm wanted to hire a woman as a lawyer. So, you started pursuing civil procedure and eventually decided to teach, becoming the first tenured female Columbia Law School professor and fought to receive the same pay and benefits of male professors.

While teaching, you directed the Women’s Rights Project of the American Civil Liberties Union and won five landmark cases that, according to Oyez, “established the principle of equal treatment in the law for women as well as men and banished numerous laws that treated men and women differently based on archaic gender stereotypes.”

As the second woman and first Jewish person to be nominated to the Supreme Court, you pushed Obama and Congress to sign equal pay legislation, continued fighting against gender discrimination and fought for equality under the law.

During your time as a justice of the Supreme Court, you extended voting rights and continuously stood up for equal rights for undocumented immigrants, disabled people and the LGBTQ+ community.

Even at the time of your passing, you broke barriers and are now the first woman to lie in the Capitol, alongside important American figures such as Representative John Lewis, Representative Elijah Cummings and Rosa Parks, who lay in honor.

Your unrelenting fight against gender stereotypes and discrimination did not stop when you faced challenges in your personal life and ignorance from your colleagues, teachers and bosses. Because of this resilience, you were able to change the law itself to include women.

This groundwork that you have set has identified gender stereotyping in the law and removed it. You have won many arguments about equal pay and benefits in the workplace and your message that “women belong in all places where decisions are being made” will not be forgotten by those who are still continuing the fight for equality.