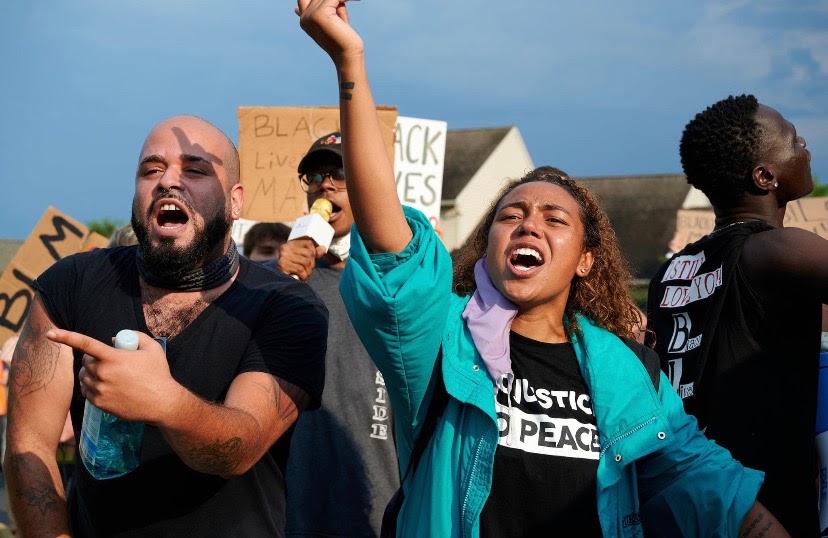 Taylor Enterline, a junior at WCU, was arrested on Sunday night during a Black Lives Matter protest in Lancaster. Protests have been ongoing since the death of Ricardo Muñoz, who was shot by a police officer responding to a call to deescalate a mental health crisis.

A $1,000,000 bail was posted for Enterline and eight others who were arrested.

Sunday’s protests began peacefully with many activists representing local and national civil rights organizations. Hailee Paige, a peaceful protester who proudly claims Enterline as a life-long friend and godmother of her child, remembers when violent protesters joined the throng.

“As soon as it started getting dark is when you could tell the atmosphere changed. We ended up splitting in two different groups,” Paige said.

Police deployed tear gas on the protesters in the late stages. Enterline worked to flush eyes and help the victims at SafeHouse Lancaster, an nonprofit organization whose mission is to “educate and equip young Black and Brown people for activism work and be a resource for training and accountability for local ally owned businesses and organizations,” [via Facebook]. As the chaos continued, police began to barricade possible exits, a police tactic known as kettling.

“They were leaving in undercover cars, four to five policemen in a car. They were barricading the alleyways and the streets to block us in … We were walking down to get to our car to leave and all of the sudden … people were running, cops were pulling up, tackling people, guns out, everything. It was just chaotic,” said Paige.

It was just chaotic.

It was at this time that Enterline was arrested by cops in an unmarked vehicle. 12 other arrests were made in relation to the protest.

Magisterial District Judge Bruce A. Roth is the administrator of what has been criticized by many, including Lt. Gov. John Fetterman, as unconstitutional and exorbitant bails. The Quad attempted to contact Judge Roth, but his office told us he is only available for comment via postal mail.

There is speculation that the arrest was not coincidental. As described by her friend, Ta’jah Norman, Enterline, a junior Criminal Justice major at WCU with minors in Women’s and Gender Studies and Youth Empowerment, is not new to the work of the Black Lives Matter movement. As a peer educator at WCU’s Center for Women’s and Gender Equity and member of Green Dreamz, Lancaster Stands Up and Lancaster Abolitionists, she is not a new face when it comes to civil work in her area. Those who know her believe that her prior experiences with protests against local law enforcement ultimately led to her arrest.

For activists like Paige, this is just another symptom of the flawed system she seeks to change. 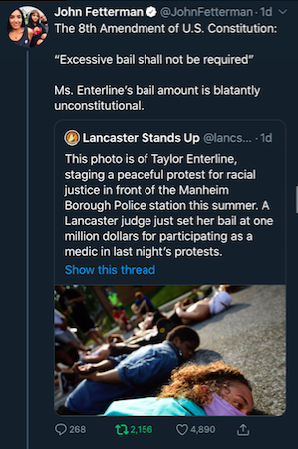 As of Tuesday evening, Enterline has yet to have any contact with family or friends, meaning those closest to her are left in the dark in regards to her wellbeing. Additionally, the family legal council that was sent from her mother was denied access to speak with her.

The WCU community has been quick to rally around their friend, coworker, fellow classmate and student by releasing information as it is discovered, as well as advocating for people to donate to several different bail funds.

Currently, the GoFundMe account set up to raise money for the bail has reached over $20,000 and is still accepting money to reach its $35,000 goal.

At $35,000, Enterline will be released from jail. However, at this time she still faces the grave consequences of her arrest.

“At the end of the day, the system is not built for Black people,” Paige explained. “Slavery ended, yes, but the system and the justice system is another part of slavery. They have you in chains…”

As of Wednesday it was reported by a close friend that Enterline was able to contact her family. It was also announced that she was to have a bail hearing on Thursday morning, a process that could drop her excessive posting. As of Thursday morning, Enterline’s bail was dropped to $50,000 and she was released, due to the funding of her family, friends, activist groups, and WCU faculty and students.

Enterline’s preliminary hearing was scheduled for this morning, but has been postponed to a later date.

Ali Kochik is a third-year English writings major with minors in journalism and women’s and gender studies. AK908461@WCUPA.EDU

One thought on “UPDATED: WCU student arrested during BLM protests in Lancaster”