Cinema Perception: Bill and Ted: face the music film review “Be Excellent and Read On, Dudes!” 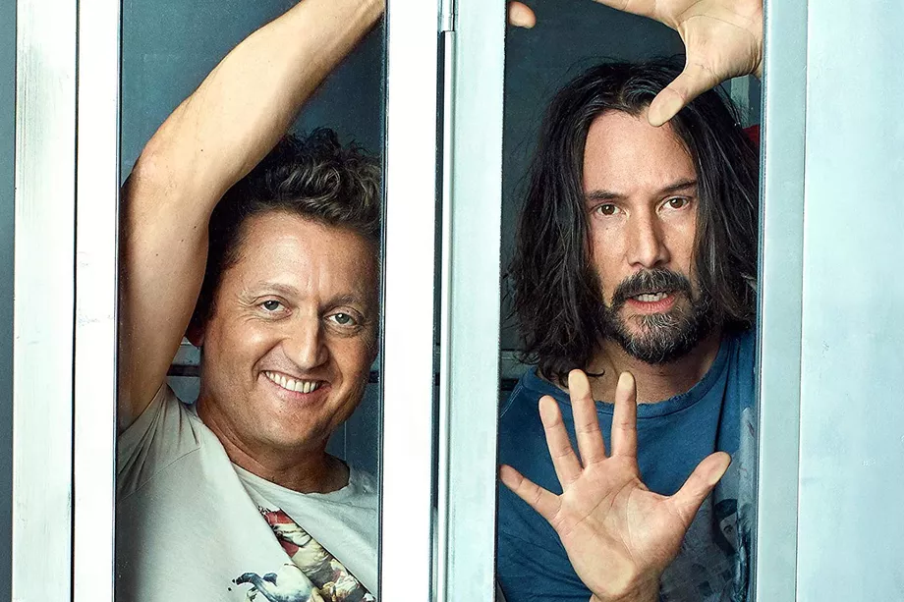 Greetings, fellow readers, to Cinema Perception, a column review for the Quad newspaper that looks at a selected film, judges its positives and weaknesses and presents an overall review of the film. For this issue, “Bill and Ted: Face the Music” will be discussed. As a reminder to longtime fans, there will be no spoilers mentioned. Before I continue, Bill and Ted’s third film does not stand on its own and it must be watched in chronological order to delve into the lore. Also, a viewer can get this film on Amazon Prime or from another streaming service.

Starring Keanu Reeves and Alex Winter, William S. “Bill” Esquire and Theodore “Ted” Logan are two unrenowned rockers that are selected by the great beyond to save the world from eradication, yet again. Unlike “Most Excellent Adventure” in 1989 and “Bogus Journey” from 1997, “Face the Music” takes place 25 years after the events of “Bogus Journey.”

Along with the same cast from the past two films, except for the late George Carlin and new inclusions, the film stood out as a separate entity, leveraging the old humor from the previous two films. Out of all the renown cast, I found great comfort to find the Grim Reaper, played by William Sadler, once again in the confines of Bill and Ted’s adventure quite amusing.

In addition to the cast, the pacing of the film was very spot-on without providing too much detail to the general plot. This allowed the viewer to actually feel comfortable, not worrying about how long the film was going to be. I personally had no trouble following what was going on with Bill and Ted’s daughters, as well as Bill and Ted. Also, special effects in the third film, in contrast to the past two previous films, are “most excellent.” In one scene, seeing the actual telephone booth vanish with no problem with Computer Graphic Imagery (CGI) is truly fascinating and enjoyable to watch.

The film also had a sense of camera focus and direction on how it was to be presented. For instance, when it came to humor, the front camera viewed Bill and Ted, while the reverse camera viewed someone else to capture their reaction or their response to Bill and Ted’s comment. Though not revolutionary, it caught my eye in seeing some sense to the film’s inner humor.

Lastly, the film’s ending was by far a satisfying conclusion to a journey well spent. As the world lives in a pandemic environment, it is comforting to know that humor is still a good medicine in keeping new and old generations alive. If you do watch this film, please stay around to see an end clip that is hidden for most people.

Other than the film’s positives, there were some parts to the film that had minor flaws. For starters, there was not enough chemistry in the set as it came to Bill and Ted’s daughters and Bill and Ted. One reason for this problem had to do with the plot direction of the film. Though it was not really a big problem, it felt like there was some disconnection or that something might be missing. Another problem I saw in the film was that there was not enough mature humor. It is true that there were certain humorous scenes presented within the film, but there was not enough mature humor for older audiences to feel that they too experienced the epic story. Rest assured that its nostalgia achieved more than just laughs.

Overall, “Bill and Ted Face the Music” was indeed a magnanimous film with minor flaws. For that, I would rate this film a three out of five stars for its nostalgic elements and loud sound-off to the highly known cast members of the film franchise. Fans that are looking for more Bill and Ted, try “Most Excellent Adventure” or “Bogus Journey,” which carry familiar elements seen in the new version. ‘Till next online issue, this is Nicholas Bartelmo signing off from Cinema Perception.