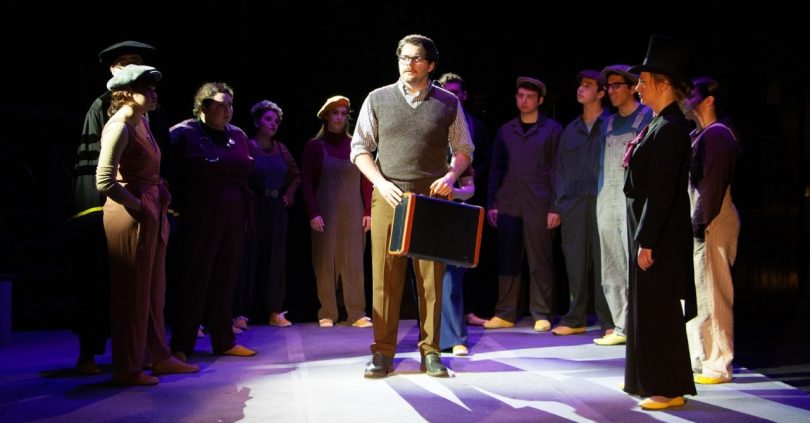 On Friday night, we both attended the showing of WCU Theater’s “The Visit,” a 3-act play by Friedrich Dürrenmatt about a woman who visits her poor childhood hometown to seek revenge upon an old lover who wronged her as a child. Bizarre and colorful, the play was an intriguing experience that both surprised me and left me morbidly curious as the show progressed.

Viewers are introduced to the small town of Gullen, a poor, run-down town in Germany that’s known nothing but financial ruin and despair for years. Upon the return of a cold, billionaire woman known as Claire Zachanassian, the town members rejoice as Alfred, her childhood lover convinces her to donate a hefty sum of her wealth over to the town and the families that reside within: one million dollars. The town is ecstatic, though they quickly realize the money will only be theirs if they agree to Claire’s terms: kill Alfred, who left her pregnant, disgraced and alone when she was only seventeen.

Mob mentality and the seduction of money and wealth lure the town members, causing them to grow deep into debt as they decide, one by one, that killing Alfred may be what’s best for the desolate town as the individual members begin taking on individual debts. This is symbolized by the new, yellow shoes that each town member can be found wearing throughout the course of the play. Absurd and nihilistic, “The Visit’s” plot is not a happy one, though the comedic effect it holds on the audience is well-placed.

While the plot was unique, it could have been a bit shorter. Some scenes tended to drag, and its messages of greed, paranoia, mob mentality and deception rang clear very quickly and at times felt over-explained. Despite this, the plot was relatively engaging in the first two acts and gave me a good laugh at the odd characters and humorous timing.

The odd thing, however, about the plot was not the plot itself but rather the choice to perform it in a university, with a cast comprised of students of similar ages. Much of the plot’s resonance depends on a vivid portrayal of life as a whole— from youth to old age. In short, for the play’s to powerfully illustrate the long-term effects of past actions and experiences, the production must convincingly portray characters of different age groups. While the acting, outfits, makeup and props of the production were all fantastic, they could have been utilized in a way that made the characters look like the age they were supposed to be. For example, several lines in the play state that Alfred Ill, Zachanassian’s former lover, is supposedly seventy years old, but, while the actor’s performance was great, he never looked a day under 30, with a full head of brown hair. Moreover, it never felt that his children were a different age than him.

As always, the E.O.Bull Center’s MainStage Theatre made for a unique theatre-going experience, as its layout allows for audiences to sit along three of the four walls that surround the stage. While the stage design was somewhat minimalist as a whole— with the most props used during the scenes in Ill’s store— it nonetheless succeeded in evoking the aesthetic of a small, run-down rural town.

All in all, “The Visit” was another successful production by WCU’s Department of Theatre and Dance, which will also produce “Student Written One-Acts,” “Spring Awakening” and “Spring Dance Concert” this semester.

Christoforos Sassaris is a 4th-year English literatures major with a minor in computer science. PS868710@wcupa.edu