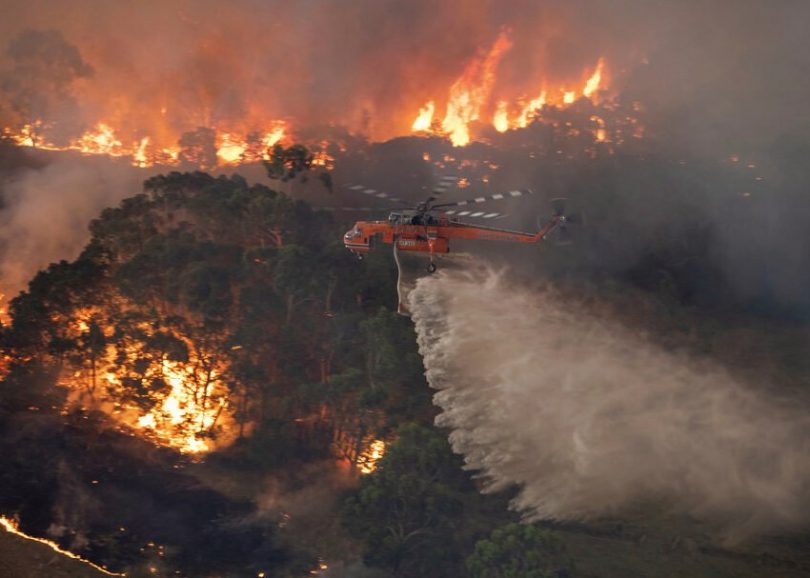 Photo of the Australia wildfire by Ninian Reid via Flickr (CC BY 2.0).

With current, major headlines such as the Novel Coronavirus and political inquiries, talk of the Australia fires have shifted to the backburner.

The bushfires sparked in September 2019, and were at their peak December through January. In September 2019, Australia’s Weather Bureau predicted there’d be “…at least three more months of drought as fires begin to spark,” according to Insider.com.

The 2019-2020 fires were brutal in their destruction of more than 14 million acres of land and termination of the lives of more than 20 people, as well as over 1 billion animals. Prior to the tragedy, more than 50,000 Koalas lived on Kangaroo Island, Australia; now, less than half of that remains, says NBC News.

Well, who’s to blame? According to scientists, the continent has had a much warmer climate than usual. The year 2019 was the hottest on record. Australia was already resided into a multiple year drought, making it, unfortunately, easy to host an unwelcome uproar.

The good news is, fire officials announced on Feb. 13 that all fires in New South Wales are under control. This February has introduced more than a week’s worth of rain which extinguished the fires immensely; these were the first rainfalls that have hit in months.

As of the present, greenery slowly sprouts, which accompanies some animals to their habitats. Although this is progress, it’s disheartening to say that many ecosystems have been  altered for good. The rapid fires killed Alpine Ash tree seedlings before they were able to reach mature heights, which interrupted the reproductive cycles of many trees. These green species not only perished but fell into extinction. A different ecosystem will come about, and species who relied on Alpine Ash forests will no longer be able to thrive.

Australia can be viewed as our global wildlife conservatory, home to 244 unique species. Residue from the flame impacts only compound the mounting pressure placed on these struggling species.  On Feb. 11, Australia’s Department of Agriculture sent out a list of 113 animal species who will need assistance post bushfires. Crystal Kolden, professor of fire science at the University of Idaho, recently told The Verge, “These really incredible remnants of, you know, the era of the dinosaurs essentially, [are] not adapted for fire when it burns, it will be gone.”

As communities begin restoration, backpackers with visas in Australia are welcomed to explore as long as they desire, under one condition: they must help rebuild on farms. The minister of immigration in Australia, David Bernard Colman, enacted this rule. It will also determine if the current adventurers are able to apply to extend their visas for another year in the Land Down Under.

How can you help?

Truth be told, this is not the last fiery uproar Australia will have to face, due to annual drought and the progression of climate change. It is a hope that future bushfires simmer down and, overtime, plenty of new habitats will form — creating more space for wildlife.

In the meantime, you can search the web to find a variety of organizations accepting donations for communities in Australia. Each organization is specific to a cause; they range from food bank donations to donating to plant trees and other vegetation.

As one, we commend the volunteers and first responders for their dedication in the containment of as many victims, communities and wildlife as they could. Growth is a constant, and this is just the beginning for Australia.

Photo found here University students were and still are affected by COVID-19 in unique ways, from dealing with housing discrepancies, online classes, and, for some, income...

This week, the Department of Public Safety rolled out their newest measure to improve security and well-being around campus. While previous efforts have focused on addressing...