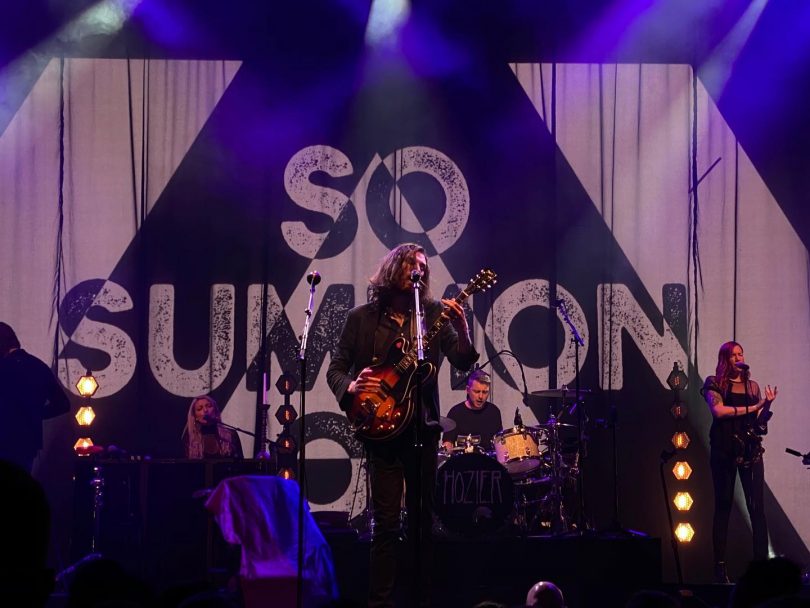 The first time I heard “Jackboot Jump,” I was screaming, sweating and smiling. At that time, in an intimate standing-room only show at the Wind Creek Event Center in Bethlehem, PA, the song hadn’t been released yet. It would take five more days for the rest of the world to hear the same beat that bewitched me, my foot stomping to the rhythm with a mind of its own.

There’s something different about this song and the crowd can feel it. Some slam their foot against the stony floor like me, others pound their fists against their chests in time with the beat. At the Hammerstein Ballroom, Hozier showcases another yet-to-be-released song, “But the Wages,” where he addressed the crowd, saying, “I also – I mean – in part of my mind, I would think that if you’re not making the right people uncomfortable, you might be wasting your time as a musician.” It’s that very sentiment that drives “Jackboot Jump.” Lured in by its enthusiastic instrumentals, you morbidly move to the beat before getting sucker punched with lyrics like, “it’s always corporate infrastructure / over the structure of your face,” when referencing the 2016 protests at Standing Rock over the Dakota Access pipeline.

“Jackboot Jump” demonstrates the Irish singer/songwriter’s global concerns, especially in reference to police brutality. Not only drawing on the symbolism of a Jackboot, a heavy leather military boot often symbolizing oppression or authoritative rule, he also references three troubling instances that become increasingly distressing when thinking of how recent they are in history. In the first verse of the almost three and a half minute song, Hozier brings us to Standing Rock to address the 2016 protests that resulted in over 500 arrests aided by the use of controversial suppressants including trained water cannons, teargas grenades, Mace and other weapons the Guardian calls “less-than-lethal munitions.”

Twenty-four seconds isn’t enough time to break the spell as Hozier forces the audience to look through the magnifying glass the lyrics hold up, this time analyzing Russia’s response to student-led protests in the summer of 2019 concerning the election in Moscow, singing, “In Moscow the Jackboot show has so much in store / for any silly student / who doesn’t wanna learn the score.” What I found most compelling about this verse is the next line, “So the Moscow Jackboot Ballet / finds some scared young dancing floor.” Not only does the line reference something Russia is quite proud of and well known for, their rigorous ballet training, but this is a powerful allegory that shows how voraciously the Russian government attempts to silence and frighten citizens into total compliance. This line in particular speaks to the craftsmanship of Hozier’s lyrics, harnessing the ability to pack profound meaning into just seven seconds of song. In countless interviews he asserts his own belief that he simply “makes noise for a living,” which, in regards to such lyrical content of not only this song but many others, offers a glimpse at his intense humility. In recent times, it’s difficult to point to examples of such profound lyricism, especially with artists that have had music grace the Top 20 of the charts.

There’s a break in the song, stepping back from lyrics to focus on the steady instrumentals that demand attention. It’s where the audience goes wild, myself included. Suddenly the relentless march of my foot isn’t expressive enough, my hand taps against my thigh, my head is nodding along to the outrageous instrumentals shockingly achieved only through Hozier’s guitar and Rory Doyle’s drumming. Five days after the show, it’s midnight on release night and I’m watching the band perform “Jackboot Jump” on “Late Night with Seth Meyers.” My apartment is dark, illuminated only by my glowing television as I’m skyrocketing off the couch; I’m worried my neighbors will complain, it’s only Thursday, but I can’t bring myself to turn the music down. I’m singing words I only half-know under my breath. The song is even better than I remember.

Hozier returns to the microphone to sing the verse I remember from the concert most, “In Hong Kong it won’t be long ‘till they have to fall in line / for the long hand of Beijing stretches south a thousand miles / where they rock the Jackboot Jump there / like that sh*t’s goin’ out of style.” Remember, I’m listening to this on Nov. 21, media coverage of the 2019 protests in Hong Kong fighting for extradition from China are at an all-time high. That’s not saying much, as focus on the activists and their mission dwindles shortly thereafter, disappearing almost completely amidst reports of the coronavirus despite activists continuing to bravely take to the streets as tensions still remain high. In essence, from the time “Jackboot Jump” was officially released, the movement in Hong Kong had about another month and a half of reporting until it faded into the background.

The final verse of the song nods to Hozier’s “gentle squeeze of the hand,” that he provided with his doomsday-themed sophomore album, “Wasteland, Baby!” But it’s not nearly as comforting as he’s abandoned his tendency to write love songs that frame the lens in which he examines life. Both songs he’s most widely recognized for, “Take Me to Church” and “Nina Cried Power,” reference “his love,” either with lyrics like “my lover’s got humor / she’s the giggle at a funeral,” or “power is my love when my love reaches for me.”

This visceral song of protest elicits no illusions of such hand holding as love is abandoned in light of human rights issues and authoritarian governments. This is what makes “Jackboot Jump” such an outlier from Hozier’s other work, including that of his two previous albums. However, we can take solace in the final verse, “All around the world you’d think that things were lookin’ rough / but the Jackboot only jumps down on the people standin’ up / and you know good things are happenin’ / when the Jackboot needs to jump.” In the final minute of song, this wild rhythm from before is called forth once again and I can’t help but think it’s Hozier imploring for the audience to continue dancing, as if dancing itself is a form of protest.

Casey Meyer is a fourth year English major with a minor in journalism. CM873291@wcupa.edu