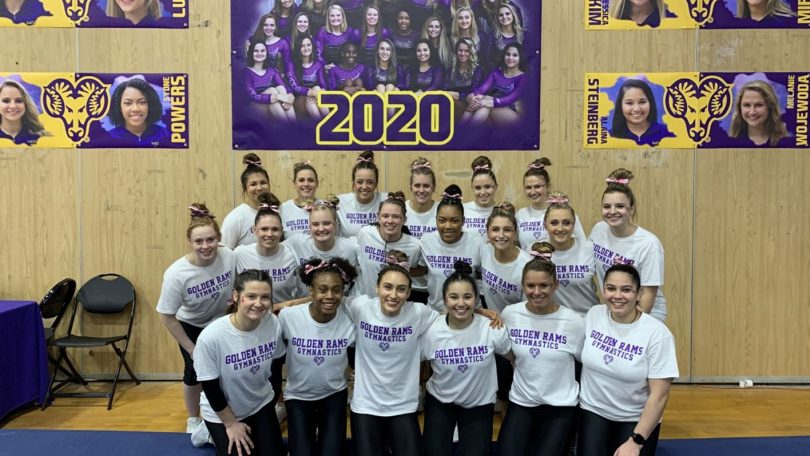 The Golden Rams played at home for the second week in a row, and they took the win against SUNY Cortland. West Chester posted a 192.450 against SUNY Cortland’s 188.025. The meet ended up moving back a day due to bad weather conditions up in New York, so the meet ran a little bit different than usual. There were only two judges at the meet rather than the four that were supposed to be there, so the meet was run a little bit differently. The Golden Rams held tough throughout, and they ended up having a stellar performance.

Starting on the vault, there were a few highlights. Winning the vault exercise, first-year Kiah Johnson scored a 9.65 on her beautiful yurchenko full. Following her, third-year Jessica Meakim placed second on the event with a 9.6, and second-year McKenna Kissinger placed third on the event with her best performance of the season scoring a 9.575. Second year Annie Bailey started off the event beautifully with her yurchenko layout.

Moving onto the uneven bars, the Golden Rams had their best performance of the year. Third-year Yoli Nodarse scored her career high 9.775 winning the event. Following her, Meakim placed second on the event also scoring her career high 9.725. Placing third on the event, second-year Ashley Duke scored a 9.7. Another highlight from the event includes first year Samantha Gill’s 9.600.

The balance beam was also a very strong event for the Golden Rams this weekend. They went six for six, which means that every girl hit their routine. Nodarse and fourth-year Sarah Boyd tied for second on the event with a 9.750. Meakim came in third on the event with a 9.675. Other highlights from the event include third-year Melanie Wojewoda’s 9.525 and second-year Rose Fanara’s 9.550.

Meakim took first in the all-around with a 38.875. The Golden Rams also swept the ECAC Awards this week. Meakim won ECAC Gymnast of the week, Nodarse won ECAC Specialist of the week, Kiah Johnson won ECAC Rookie of the week, and Kissinger won ECAC Coaches Choice. Nodarse stated, “It felt awesome receiving Specialist of the week! I have been working hard on the little things and it has been paying off because I received my career high on bars! I am feeling great about the team because of all the work I see everyone putting into the gym. We are definitely all on the same page for what we want, and that makes me so excited for what is to come.”

Kissinger stated “It was truly an honor to be chosen for Coaches choice award. Coach and (Assistant Coach) Steph do so much every day to push our team to achieve all the goals we set for ourselves in preseason! Can’t believe the season is already almost half way over, but I am so excited to see what the rest of the season has in store for us! Our team has so much potential this year to do bigger things than we already are, and I can’t wait to see it happen!”

“Caster Semenya” by 13o licensed under CC BY-NC-SA 2.0   Competing at the Olympic Games is a once-in-a lifetime opportunity for athletes at a global level. It goes without...