New WCU book explores the lives of the Tuskegee airmen 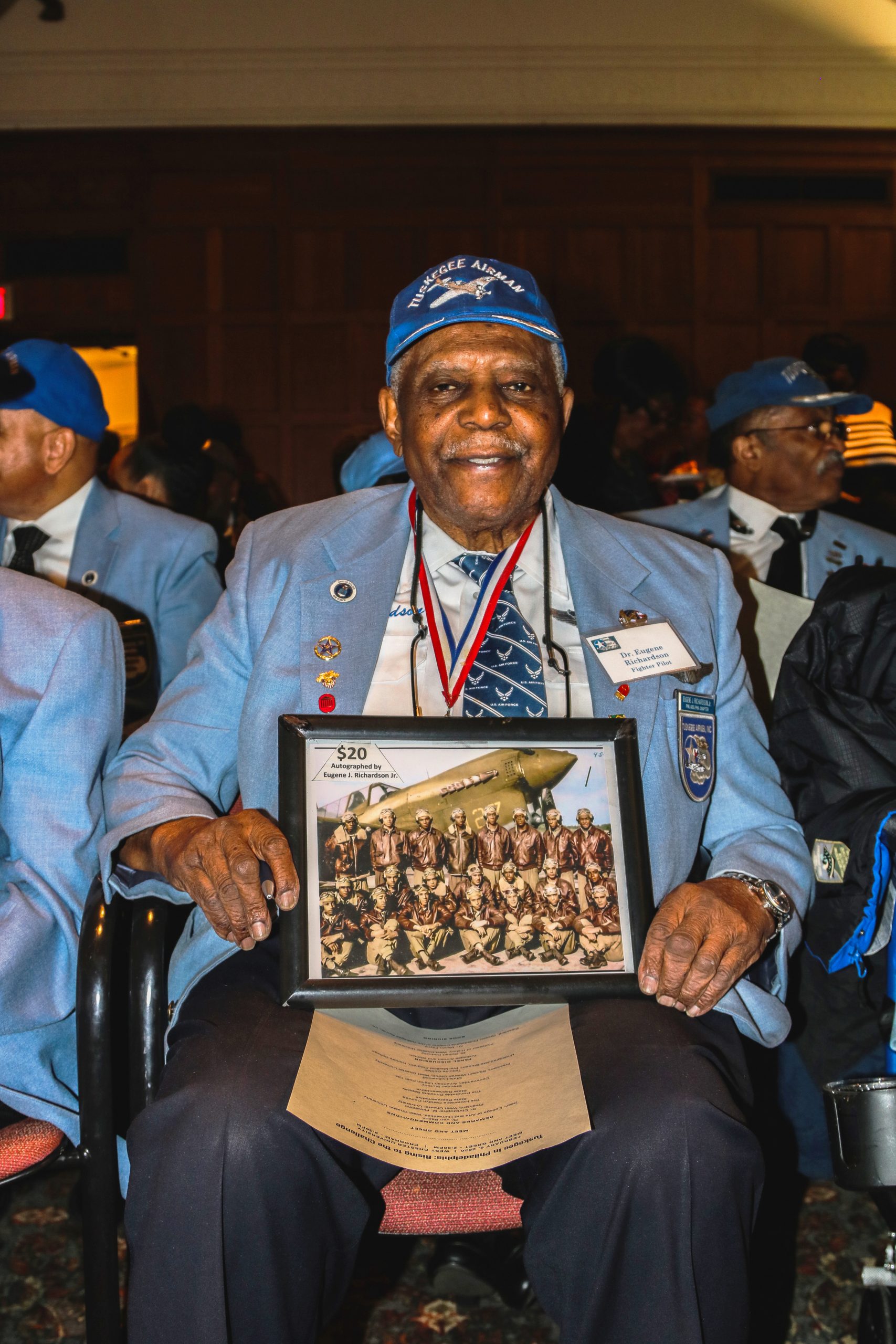 While the quiet bustle of Philips Autograph Library is a far cry from the hot tarmac of the Tuskegee Army Air Field, the lessons and memories from the four men and women of the Tuskegee Airmen seem as sharp and vital as when they were forged at the onset  of the Second World War, almost 80 years ago. Thursday’s event was a celebration of members of the Philadelphia Chapter of the legendary group of fighter pilots, but in a more distinct sense,  a meeting of generations — a passing of the baton.

The reason for Thursday’s meeting was cause for celebration in its own right; Dr. Robert J. Kodosky of West Chester University’s History Department has recently finished his second book, Tuskegee in Philadelphia: Rising to the Challenge, which brings to life the history of the Philadelphia chapter of the Tuskegee Airmen, a group of African-American military pilots who overcame Jim Crow-era racism inside and outside the military to become one of the most commended Air Force groups during the war. Kodosky centered the book around firsthand accounts from living members and families of the Tuskegee Airmen. Profits from the book will go towards scholarships developed with the chapter.

The event opened with remarks from the Dean of the College of Arts and Humanities, Dr. Jen Bacon, as the crowd began to take their seats, many already having had their books signed by the Airmen in attendance. Dr. Bacon introduced the four members of the Tuskegee Airmen: Alma Bailey, one of the few African-American women selected to join the Tuskegee University Cadet Nurse Corps in 1943; Dr. Eugene Richardson Jr., a Tuskegee fighter pilot who was commissioned 2nd Lieutenant after completing flight training in 1945; Nathan O. Thomas, a logistics officer who provided valuable flight information for the historic 99th Pursuit Squadron; and Roscoe “Coach” Draper, one of the first 10 African-American men selected to serve as flight instructors in Tuskegee.

Following Dr. Bacon’s introduction, the Airmen received awards and commendations from President Chris Fiorentino as well as Representatives Carolyn Comitta and Christina Sappey, all of whom spoke to the bravery and dedication of the Airmen, not only during the war, but in the decades that followed.

“My father is a World War II vet and I grew up hearing stories about his experiences in the war,” said Fiorentino in his opening remarks, “and I have to say that the Tuskegee Airmen were the stuff of legend, and to actually be here in the presence of some of you is very inspiring to me.” Fiorentino also praised Dr. Kodosky’s book, calling it “inspiring” and “well-written”.

Representative Comitta gave her appreciation for both the Airmen and their families, as well as announcing that she would present a copy of the book to Governor Tom Wolf in accordance with Nathan Thomas’ hopes that the book, and the history of the Tuskegee Airmen, might be taught in schools around Pennsylvania.

After these remarks, Chris Hollowood, president of WCU’s Student Veteran Group, gave his thanks to the Airmen and, with a small group of other student veterans, presented a gift to each member. Another speaker, pre-med student Tyquine Golden, delivered a heartfelt speech that put words to a theme evident in everyone’s remarks throughout the afternoon: the real strength and honor in the Airmen is “not what [they] are, but who [they] are.”

Golden cited not only the Airmen’s actions during the war, but also their exemplary careers as pilots, educators and volunteers, as an inspiration to those of a younger generation, especially in Golden’s home neighborhood of West Philadelphia. Many speakers, Golden included, cited the extraordinary difficulty the Airmen faced during the war, being denied the rights at home that they fought to preserve overseas.

In the brief panel that followed, Alma Bailey recounted her school who denied them the opportunity to join the Cadet Nurse Corps to black students while they advertised it to their white peers. Roscoe Draper remembers being discouraged from becoming a pilot because of his race, a prejudice that the US military stuck to even at the height of the war when 17-year-olds were drafted into combat.

The Tuskegee Program itself only got off the ground after First Lady Eleanor Roosevelt paid a visit to the training base. After a short flight with Draper’s mentor “Chief” Charles Alfred Anderson, Roosevelt saw the skill and dedication of the pilots at Tuskegee and the discriminatory military policy began to overturn. In a few short years, the Tuskegee “Red-Tails,” named after the signature red-tails of their planes, were some of the most sought after in the Air Force.

The Tuskegee pilots have been commended again and again for their incredible record of escorting bombers during World War II and their bravery and commitment to a country that refused to afford them basic rights. The integration of the military paved the way for other Jim Crow laws to be overturned. As Golden concluded in his speech, “Who you were in the past paved the way for the future.”

As far as the future is concerned, Draper, who recently celebrated a birthday, seems satisfied with the world for which he fought, both in and out of combat:

Tuskegee in Philadelphia: Rising to the Challenge is available in the WCU Bookstore and online.