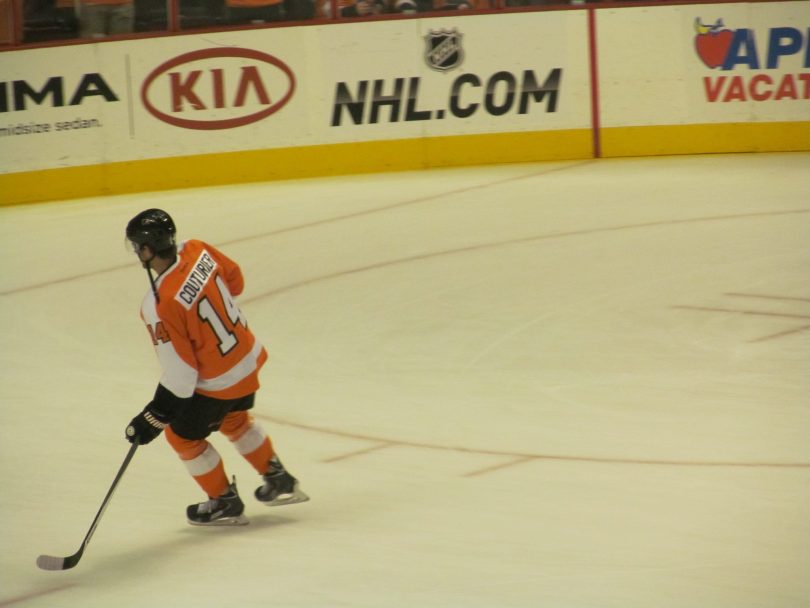 The Flyers hosted the Carolina Hurricanes last Tuesday, Nov. 5, looking to bounce back from the rough shoot-out loss suffered against the Maple Leafs. Carter Hart flashed his potential in this one, holding the Canadiens to one goal when the game could’ve easily been 4-3 or worse. Flyers defenseman Matt Niskanen put a slap pass right onto Sean Couturier’s stick, who’d reflected the puck under the arm of goaltender Petr Mrazek for the first goal of the game.

After the Hurricanes tied the game, the Flyers scored three unanswered goals in the third period. Konecny found himself with an easy tap in at the side of the net and rookie Joel Farabee made a power move and cut into the front of the net, stuffing a rebound in. Then, captain Claude Giroux was presented a breakaway when a sloppy Flyers zone exit somehow bounced past the Hurricane defense. He went five-hole with a half slap-shot, and stamped the win home in front of a cheering home crowd.

They stayed home to host the Montreal Canadiens, before leaving themselves to face Toronto a few days later.

Fun fact: Flyers assistant coach Michel Therrien was head coach of the Canadiens from 2012 to 2017, leading them as far as the eastern conference finals in the 2013-2014 season.

The Flyers came out guns blazing as they outshot the Canadiens 18-12 in the first period. This was really nice to see, as in the last couple of seasons it has been the Flyers getting outshot regularly. Philly defenseman Phil Myers wristed a shot from the point and it found the net, his first national hockey-league goal. They had the visitors on their heels as they closed out the first period while on a powerplay.

The momentum carried over to the second, as James van Riemsdyk scored off of a loose puck one minute and 30 seconds in. With about six minutes left to go in the second period, the Canadiens has a three on two odd-man rush seemingly out of nowhere and scored to make it a one-goal game.

Once possible-Flyer Shea Weber ties the game in the third period, the game entered overtime. The home fans at Wells Fargo Center did not get a lot of free hockey, as 55 seconds in Couturier let a wrist shot go and it snuck under the arm of elite goalie Carey Price and the Flyers took the victory. The Flyers finished the contest with an impressive 43 shots on goal.

Flyers rookie Joel Farabee continues to be one of the bright spots on the team, and the team has racked up three wins in a row.

The Flyers traveled to Canada to visit the Toronto Maple Leafs on Saturday, Nov. 9, the first game of a back-to-back. They once again started strong with a great all-around first period, stopping Maple Leaf opportunities while cashing in themselves. Phil Myers scored for the second game in a row, going top-shelf on goaltender Frederick Anderson, continuing to impress Flyers brass. The powerplay, which was unable to produce a goal in six tries against the Canadiens went one for two in the first period, with Oskar Lindblom deflecting a pass into the top-corner on Anderson with under two minutes left.

The second period started with a Maple Leafs powerplay, with Jake Voracek getting caught for a hooking penalty. Leafs’ young gun Kaspari Kapanen decked two Flyers and almost set up a goal after falling down — but besides that the powerplay was effectively killed. Brian Elliot would not keep the shutout however, as midway through the period Leafs’ defenseman Travis Dermott received a great pass and walked into the slot, tallying a goal for Toronto.

After killing another Toronto powerplay, the Flyers entered the third period with the lead. That would only last about four minutes, as William Nylander one timed a great pass into the back of the net. This happened moments after Anderson made three saves to stop the Flyers from getting an insurance goal.

The Maple Leafs really started getting quality chances to score and take the lead, with Elliot playing strongly to keep the game tied as Toronto made it hard for Philly to set up in their zone. The game went down to the wire with the Leafs almost winning the game in the final seconds, but the Flyers survived into overtime.

After an intense extra period, which saw both teams almost win it (Kevin Hayes hit the post, Maple Leafs had three on one) the Flyers found themselves in the dreaded shootout yet again. Elliot stopped two out of three attempts from three very skilled forwards and Giroux and the man they call “Coots” scored to win on the road.

Flyers rookie Joel Farabee continues to be one of the bright spots on the team, and the team has racked up three wins in a row. Two out of three wins came down to a shootout, in which the Flyers have the worst all-time record in NHL history. Even more impressive is that The Flyers have one of the best home records in hockey. Players like Kevin Hayes will surely have to produce more points, but if they keep this up, they will see themselves in the playoff picture come springtime.

They continue their back-to-back on the road against the Boston Bruins on Sunday night, Nov. 10.