A Voice at the Table • Showcase

The Impact of a Voice 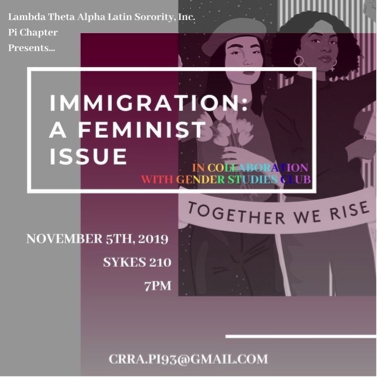 TOGETHER WE RISE!
November 5th at 7pm in Sykes 210 join Lamda Theta Alpha Latin Soroity, Inc and Gender Studies Club at WCUPA as they host a program discussing immigration through a feminist lens! #StayWoke
@lta_pi @wcu_genderstudiesclub

Homecoming has come and gone for WCU students and  public safety’s presence was stronger than ever. It is believed that every student can attest to the magnificent amount of public safety, however it is also believed that some areas involved heavier presence than others. Personally contacting public safety officers, four questions were asked:

Where was the largest amount of police presence?

Do you feel as though there was enough public safety presence or was  more needed?

What areas were the most high risk?

Was it worse or better than last homecoming in these areas?

Although these questions should be asked and answered, trying to have these questions answered was a challenge within itself. Although public safety respectfully tried to cooperate, my  questions were not answered by the department. These are questions such as these can be argued in the sense of confidentiality of the depart

ment, but these may be the questions that need to be asked to uncover the intentions of our police departments.

Questions such as: why do you patrol the areas that you patrol? What are your intentions in patrolling these areas? As we look at the mission of our police departments, the common mission is to protect and serve, correct? How can you carry out the mission of protecting and serving the community  when the people that you protect and serve feel uncomfortable with your presence?

The lack of clarity of our police departments are one of the major struggles within communities and in regards to feeling safe. Questions like the ones above need to be able to be asked, but most importantly ANSWERED. We have a right to feel safe and have our questions answered.

If you’ve ever participated in homecoming or any other major sporting event, you probably know what tailgating is. But just in case you don’t: tailgating is a huge gathering that typically happens in the parking lot of sport stadiums. At WCU, there are usually two tailgates. At both tailgates, you will find loud music, food and people having a good time. There is really only one difference: one tailgate is predominantly white and the other one is predominantly black. With so many similarities, many might think that both tailgates are treated the same by public safety, but up until this year, that was not the case.

The black tailgate has been moved twice in the past two years due to being classified as a disturbance of peace. At some point this year, there was talk of getting rid of the black tailgate all together. The concept of this tailgate disturbing the peace but the other one being acceptable was shocking to many because the other tailgate begins much earlier and as mentioned above, both tailgates display similar characteristics. There is usually a higher presence of cops at the black tailgate which in previous years gave off a hostile vibe. Shockingly, this was not the case for this tailgate.

Although there was still a heavy presence of public safety, this year, they were much more peaceful. Instead of seeking out trouble, they were there to make sure everyone was safe. Positive interactions and conversations between public safety and the students were made and it gave the tailgate a more welcoming feel. If every major event could go the way the tailgate went or even better, it could definitely help strengthen the communication and understanding between students and public safety as a whole.

When asking students to reflect on this year’s homecoming, overall students seemed pretty satisfied with the way everything played out. But there were some differences compared to other years and they were definitely noticed. Students commented on the fact that the public safety officers were biking through the crowds which seemed either new for this year, or just more noticeable.

Comparing this year to last year it seems that officers tried to have more of a presence and be more in tune with what was going on in the large crowds. But, what students did appreciate was the fact that officers were letting the students be themselves and have a good time. When asked, nobody could recall having any negative issues with public safety or noticing anyone else having problems. In fact, they were engaging with students. “They were really cool with us this year,” commented sophomore Calia Burger. She went on to add the fact that she saw them taking group pictures for students and even one officer hopped in.

Although most people had positive interactions with public safety, we’re sure that’s not the case for all. But what matters is a different approach has been noticed and although things aren’t exactly how we want things to be, steps have been taken in the correct direction.

The impact of our previous article “To Protect & Serve” has truly led to some action, with public safety officers gearing most of their attention to the day parties going on at North Campus during the Homecoming tailgate. Arrests were made that actually needed to happen, parties were shut down that actually needed to be and students who were enjoying themselves in a non-problematic matter could do so without being harassed. Our goal was to not blame and put the attention on another group of students, but it was to highlight the lack of support and trust minority students receive, replaced with suspicion and stereotypes that our “noise” and presence is disruptive.

We know that this doesn’t solve all of our problems.

Najah Hendricks is a fourth-year majoring in social work and a YES minor NH871270@wcupa.edu.

Courtney Barbour is a fourth-year  majoring in computer science and minoring in tech writing CB901997@wcupa.edu.

Charnel Thompson is a fourth-year student majoring in business management  with a minor in culture and media CT869337@wcupa.edu.

Midori Suber is a third-year student majoring in media and cultures with minors in criminal justice and African-American studies. MS895361@wcupa.edu.

Photo via WikiMedia Commons According to a study done by Cambridge Core, roughly one-fifth of all college and university students experience a mood or thought disorder lasting for...