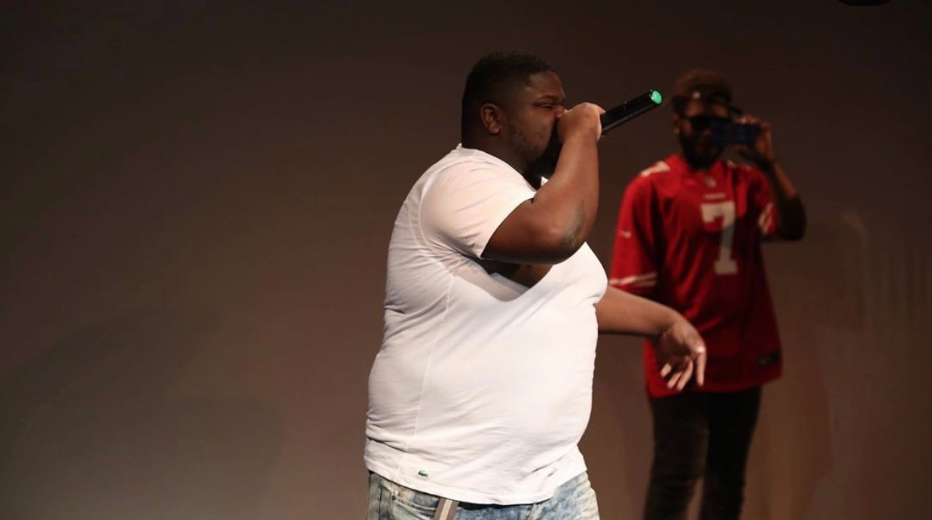 Jay Trilla jokes, “I want to be on that list one day because I want to be living ‘large.’” Jordan Jones, also known by rap name Jay Trilla, is referring to a list of not just some of the biggest rappers of all time, but some of the rappers who have made it big and are literally big men on the scale.

Standing at only 5’6”, but weighing in at over 250 lbs, Trilla rattles off the names of those he desires to one day be amongst. The list includes artists like E-40, Fat Joe, Scarface and the one he considers the greatest of all times, The Notorious B.I.G.

Trilla remembers a couple of years ago when he lost almost half his body weight and was weighing about 135. “Everywhere I went, people were like ‘you look good’ […] and I felt good too, but when I lost that weight, I lost a part of who I was,” he said.

Trilla felt like he lost himself at the time. When he lost the weight, he was spending so much time working out and focusing on his size, that he stopped doing the things he loved. He stopped writing, stopped performing and had put all of his energy into something else: the desire to be someone else or a thinner version of himself.

Thinking back on that time, he recalls, “I don’t ever want to go down that road again. I mean, I want to be healthy, but I want to stay true to myself.”

By staying true to himself, Jay Trilla has gone back to wanting to do everything in his power to follow his dream. These days he spends much of his time writing, performing in local shows, laying down tracks in local studios and making videos to upload to YouTube. He hopes that his hard work pays off and that he gets a break before he can save up enough money to make a move to Atlanta. Atlanta is where the music business is beckoning young and upcoming artists, but for right now, he is doing what he can to use the resources Norristown offers to make a name for himself.

Even though the “town,” as Norristown is often called by its locals, only has a population of less than 35,000, Trilla has managed to find others around him who share the same aspirations and passion. These artists have managed to find others in this small town who work behind the scenes of rap, offering a connection to making a name in the business.

Trilla believes that the business is opening up in Norristown. “It’s time,” he says. “They got actors and sports legends coming out of this city, so what’s to stop me for becoming the next one to be famous?” Jones is referring to the guy from “Everybody Loves Raymond,” Peter Boyle, and baseball legend Tommy Lorsorda, who Jones’ grandfather knew personally. “You watch, I’m going to be right up there beside those famous Norristonians,” he says seriously.

Trilla first started writing down rhymes and found a love for words around the age of six. He remembers how it got him attention for the adults around him, and he enjoyed performing for them.

“I hit middle school, and I had what you might call a life-changing event,” he says. His teacher had assigned an original poetry writing assignment. “I got up and read in front of my class and when I finished, the class was real quiet, scary quiet. I thought I was in trouble for something I said. Then I heard this loud applause, and that’s when I knew what I wanted to do with the rest of my life,” Jones said.

During the early days, Trilla was involved in a street rap contest called “battle rap.” Battle rap is performed without music. He and a high school friend traveled to nearby cities such as Harrisburg and York to compete in rap battles. This form of the art made his love of writing rap grow even more, but his love of beats made him want to perform rap in a more traditional form.

That’s when Trilla realized that if he was going to be serious about this business that he would have to put everything into it. That meant time, money, effort and finding the right people to help his effort along the way.

“I’m putting money away for the move I want to make, but it’s so hard because I have to spend money to make money, “ Jones says. “I can’t even tell you how much it takes to get your name out there. The amount I am paying out to get paid is out of control!”

Trilla says it will all be worth it when his dreams come true. He doesn’t believe in “ifs,” only “whens.” “I’m going to try until I die because this stuff is in my blood. It’s who I am.”

Lee Holmes is a fifth-year professional studies major with minors in journalism and business law. BH878969@wcupa.edu