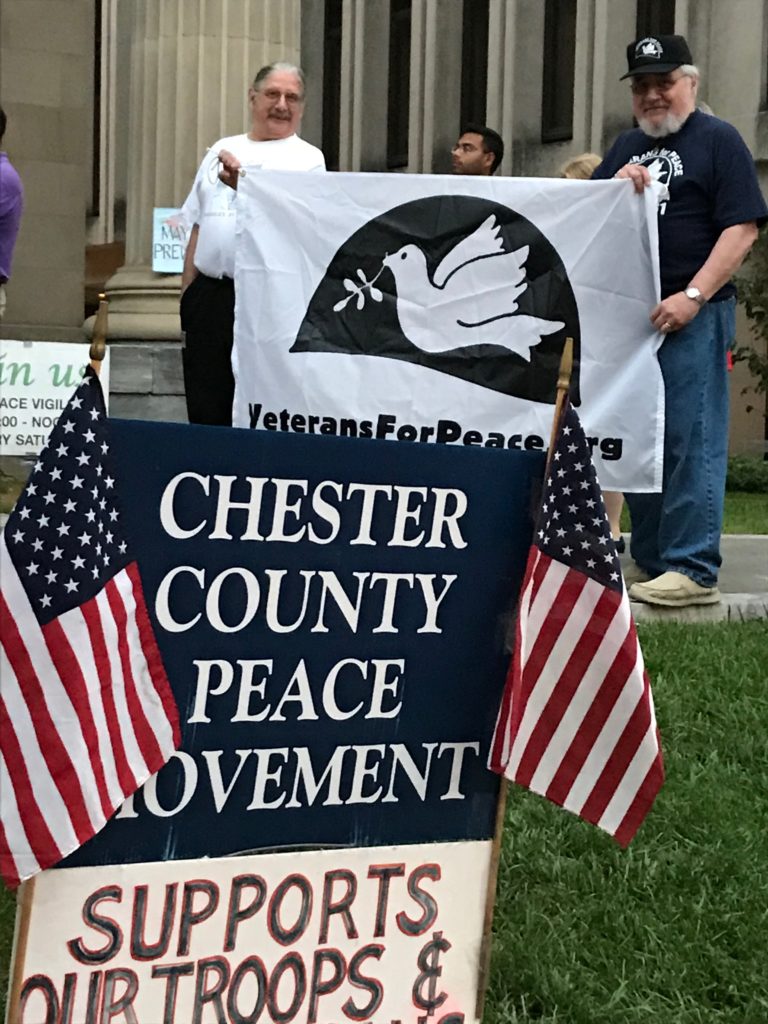 For some, the intersection of Market and High Street may just be another busy section of downtown West Chester, a nondescript corner sandwiched between the Chester County Courthouse and Barnaby’s Pub. For many, however, the corners of the intersection have been host to 17 years of protests, vigils, fundraisers, rallies, brawls, arguments and celebrations. What began in 2002 as a weekly peace vigil held by retired lawyer and peace activist Karen Porter in protest of the burgeoning Iraq War, has grown into nearly two decades of protests involving hundreds of Chester County residents. In 2007, Navy veteran Rich Davis took to the corner in counter-protest, supporting the Iraq War and opposing Porter’s growing organization. Under the gaze of West Chester’s historic Old Glory statue, the protests and counter-protests have grown into two movements: Porter’s Chester County Peace Movement and Davis’ American Sheepdogs. While they’ve sprouted into full-fledged communities, holding fundraisers and gatherings throughout the year the organizations have not forgotten their corner protest roots. Every Saturday morning, rain or shine, finds a number of protestors on opposite corners of the square, toting signs and flags, drawing honks of support from passing cars.

As orderly as the protests may seem now, the years between the first counter-protest and the demonstrations’ current state saw some major conflicts between the CCPM and the Sheepdogs that culminated in violence, arrests and the eventual separation of the groups to opposite corners.

Of course, when trying to nail down the exact details of these conflicts, the story shifts depending on who you ask. “We can no longer have our moment of silence without them running their motorcycles, shouting nasty names and making personal attacks on [Karen Porter],” CCPM activist Carrie Miles said in a 2007 op-ed piece in the Philadelphia Inquirer.

Sheepdog and Vietnam veteran Howard Richardson remembers the early days of the counter-protest quite differently.

He says of Rich Davis’ first Saturday protesting on the corner, “Within 10 minutes, four [CCPM members] came over and they weren’t talking nice…He wasn’t trying to incite anything, he went over and stood with an American flag. How innocent or how innocuous that can be, but within minutes, four of these “punk thugs” came up to him.

“There were fights in the street,” Richardson continued. “It was nasty. We would meet in the street. A couple fistfights broke out. Right here on this corner, I decked a guy.” The original protests around 2007-2008 sometimes swelled into huge crowds, with the Inquirer reporting hundreds of protestors on each side on the fifth anniversary of Karen Porter’s original peace vigil.

On March 22nd, 2008, two protestors associated with the CCPM were arrested after a physical altercation with a journalist who was filming a standoff between the two groups. The video, uploaded by right wing independent journalist Tanya Gail, appears to show one rally member repeatedly calling another protestor a “traitor” and a “leftard” before he swipes at the camera, saying “get that camera out of my face.”

Although this quiet Saturday more than a decade later couldn’t feel further from those hostile beginnings, as the CCPM and the Sheepdogs take up their positions on opposite corners of the intersection. “Yeah, there were some rather tense moments here at times.” says CCPM member John Hellmann. “But now that time has passed. I know a lot of the folks over there; we’re very cordial. We’re respectful.”

Although the wars, the signs and the names have changed since 2002,  Hellmann, a weekly attendee of the peace vigils, sees CCPM’s goal as consistent with that of the movement’s pre-Iraq War protests. “I think our mission stays the same, as we’re out here standing against the endless wars that our government continues to pursue.” The Sheepdogs see their mission statement as having remained constant as well, with the group’s focus steadily on “supporting the troops.” 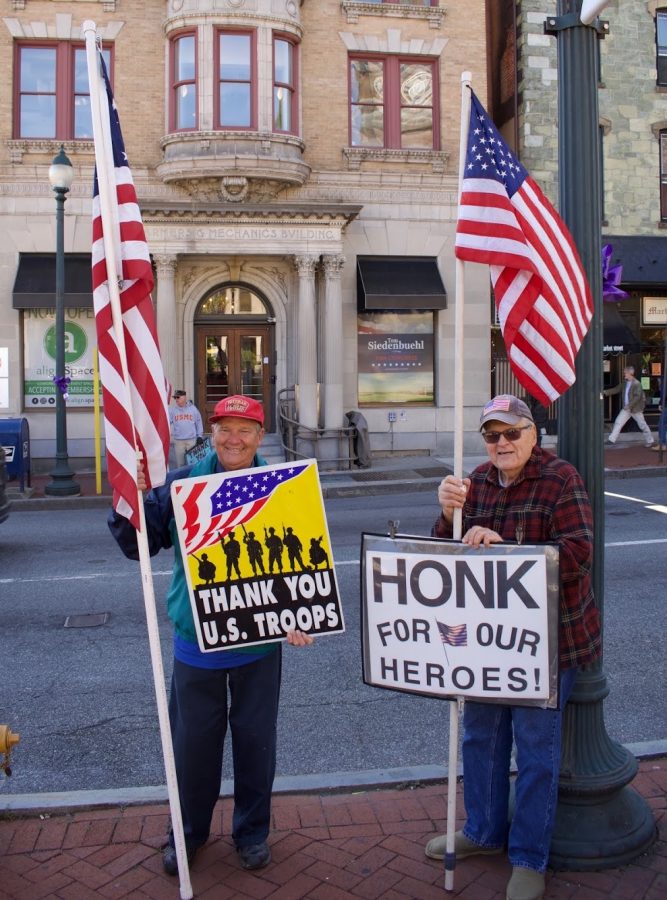 While the years may not have dulled either movement’s dedication to their cause, the groups seem to have moved away from conflict with one another and more towards their individual pursuits. The American Sheepdogs, while more of a casual community since the departure of Rich Davis, have organized memorials for September 11th, celebrated Flag Day and troop homecomings, and mobilized politically, splitting off into the Pennsylvania Conservative Council. The CCPM holds biannual canning fundraisers to support causes like Safe Harbor, housing homeless veterans and local food pantries while also holding annual rallies for the International Day of Peace, Sept. 21. The latest of these rallies, held only a few weeks ago at the Chester County Courthouse, drew a crowd of around 35 and included speakers like State Senator Andy Dinniman and Pennsylvania Representative Carolyn Comitta.

Even the protestors’ signs have seemed to become more general statements of support over the years without losing their potency. Instead of “Caution: Liberals Trashing America!” or “Five Years of Horror! Make Peace, End The War!,” (both signs from the protests’ heights in 2008), you’re more likely these days to find signs reading “Honk to support our troops” and “Honk for peace.”

While the two movements have definite trends among the political leanings of their members, the Sheepdogs and the CCPM both maintain non-partisan and non-political identities. “Everybody supports the troops I would hope, but that’s what we’re all about –  we’re not political in any way, but we’re here to support our troops,” says Bill Jones, Korean War veteran. Kevin Patrick Kelly of the CCPM, a 2014 graduate of West Chester University agrees, “What you find is that peace is bipartisan. There are conservatives and liberals that want to end war just as much as we do.” Hellmann also sees the Sheepdogs’ goal of supporting returning veterans as an important part of the peace movement. “We support the warrior,” he says, “but not the war.”

Of course, the organizations’ hesitation to be seen as political doesn’t mean that their members have any reservations about their personal beliefs, especially when it comes to the polarizing Trump administration. “Trump pulling out of the Iran Accord was wrong,” says Hellmann of the President’s 2018 withdrawal from a nuclear agreement with Iran that saw international support. “And now, as a result, we’re here, we’re on the verge of war. He does a lot of bluster, but he has no concrete plan to move us forward to a just and peaceful settlement.”

Although the movements continue on, the founders of both groups have since stopped their involvement. Karen Porter, having moved to North Carolina, continues her activism beyond her time in Chester County. Rich Davis, having retired a few years ago, has left the cause to his fellow Sheepdogs.

At noon, as the protesters began to put away their signs, the Sheepdogs gather around the Old Glory statue, which depicts a Union soldier with battle flag and bayonet in hand. Each week’s gathering is concluded with a prayer for active and inactive troops, followed by the Star Spangled Banner and God Bless America. On the courthouse steps, you could hear the Sheepdogs sing as the International Day of Peace rally began. “We love America, we respect America, and we’re very pro-American,” Kelly says as the rally’s first speaker takes the podium. “Because there’s nothing more American than wanting those soldiers to come home with their families.”

You can find more about the CCPM at ccpeace.com. While the website is currently down, the American Sheepdogs can be found at AmericanSheepdogs.com