Best spots in West Chester to watch the Philadelphia Eagles 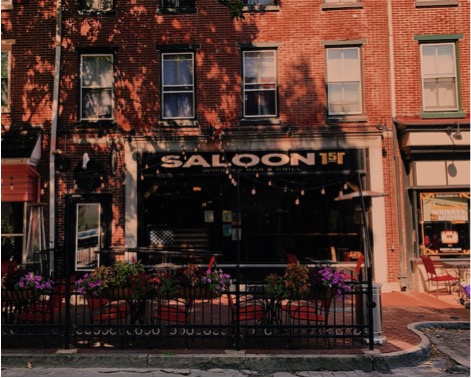 One thing many Americans have in common—specifically here in the borough of West Chester—is that on Sundays, we watch NFL football, especially the Philadelphia Eagles. Something I have noticed since turning 21 is that there are not many places to get a table and totally enjoy the football experience. I understand the appeal of watching the game with a big crowd of fans. However, I sometimes question the hype and crowdedness of some of the popular bars in West Chester. Barnaby’s and Saloon 151, in my opinion, obtain the largest crowds on Sundays, sometimes — even standing room only.

Bars compete against each other by having all sorts of drink and food specials. Even though there are more than 20 great destinations to watch the game on Sundays, I narrowed it down to the top five bars and restaurants to watch the game by researching drink specials, food specials and of course: the amount of TVs with the Eagles on.

Jake’s Bar—without a doubt—is a great spot to watch the Eagles play on Sunday. Despite only having two small TVs and not much seating, it still makes my list of the top five. It is a staple of West Chester and attracts the most passionate of Eagles fans: the type of fan who can barely make it to work on Monday after an Eagles loss. As far as drink specials go, they simply cannot be beat. They offer $1 Coors Light drafts and $2 dollar Blue Moons served with fresh orange and a deal on pitchers of beer as low as $6! If beer is not your favorite, Jake’s has recently put in a keg of Truly Hard Seltzer, which pleases many. As far as food goes, there is none. Yes, that is correct; Jake’s Bar does not serve food. The reasoning behind this is because Riggtown Pizza Oven is right next door. Riggtown arguably has the best pizza in town resulting in happy football fans—as long as the Eagles are winning. The amount of emotion that is displayed at Jake’s Bar is second to none. This October, they will be giving away their famous, pink “Jakes Bar T-shirt” to raise money for breast cancer awareness.

Iron Hill is one of the most unique restaurant-bars in all of West Chester. The bar area is covered with high top seating and plenty of room, ensuring no one misses a play. What separates Iron Hill from the rest of the pack is that they only serve their own beer, which is brewed in the same building. The food menu is delicious and extremely diverse. Though it may be pricey, you get what you pay for: a delicious meal and great beer. On Sundays, Iron Hill’s most popular special is 20 wings and a pitcher of your choice for $30. This seems to draw in many birds fans regularly during game time.

At number three, Ryan’s pub is a great place to watch our Eagles win. They have plenty of seating and three separate bars—one of which is outside. Each fan has a view of the game at all times. On NFL Sundays, they offer $3 “you call its” and $2 domestic beers. On top of the drink special, they serve their famous wings at half price. Ryan’s is one of the bars in West Chester that often gets packed during Eagles games — even for an Irish pub that bleeds soccer! numerous E-A-G-L-E-S chants break out at this high energy bar on Sundays.

Barnaby’s is one of the best spots to watch the game in all of West Chester. They have four bars with one outside, and every one gets crowded! Barnaby’s attracts the rowdiest of all Eagles fans. When speaking with management, they said every game—no matter the day of week—will have a special. For Thursday night games, they offer free nachos with any order of an entree. Regularly for games, they do $2 domestic bottles of beer. Not just for the Eagles game, but for Sunday in its entirety. Despite large crowds, it is still possible to get a table—just not easy. Barnaby’s would rank higher on my list, had the crowds not been so unbearable.

Saloon 151 is, in my opinion, the best bar to watch the Eagles play on Sundays. It is the perfect balance between big crowds and room for comfortability while enjoying a meal and a cold beer or beverage. The whole bar is themed around the Eagles. The owner is a big fan of Philadelphia sports, making Saloon 151 feel like you are at the tailgate. Saloon 151 has outdoor seating that has a view of the game too. Every win feels like the Super Bowl when you watch here! When it comes to specials on drinks and food on Sundays, Saloon 151 is a clear winner. They offer the daily chef special for only $6 and drop as low as $6 for their sandwiches—with a few exclusions. For the fans who like to get their day started early, they offer bottomless mimosas and Bloody Mary’s for just $16. Once kickoff hits, all light bottles drop to $2. The specials they offer are as good as they get. There are TVs everywhere and Saloon 151 guarantees you won’t leave hungry!

Aidan Freud is a student at West Chester University.