Department of Theatre and Dance presents “The Tragedy of Macbeth”: not “your grandma’s Shakespeare” 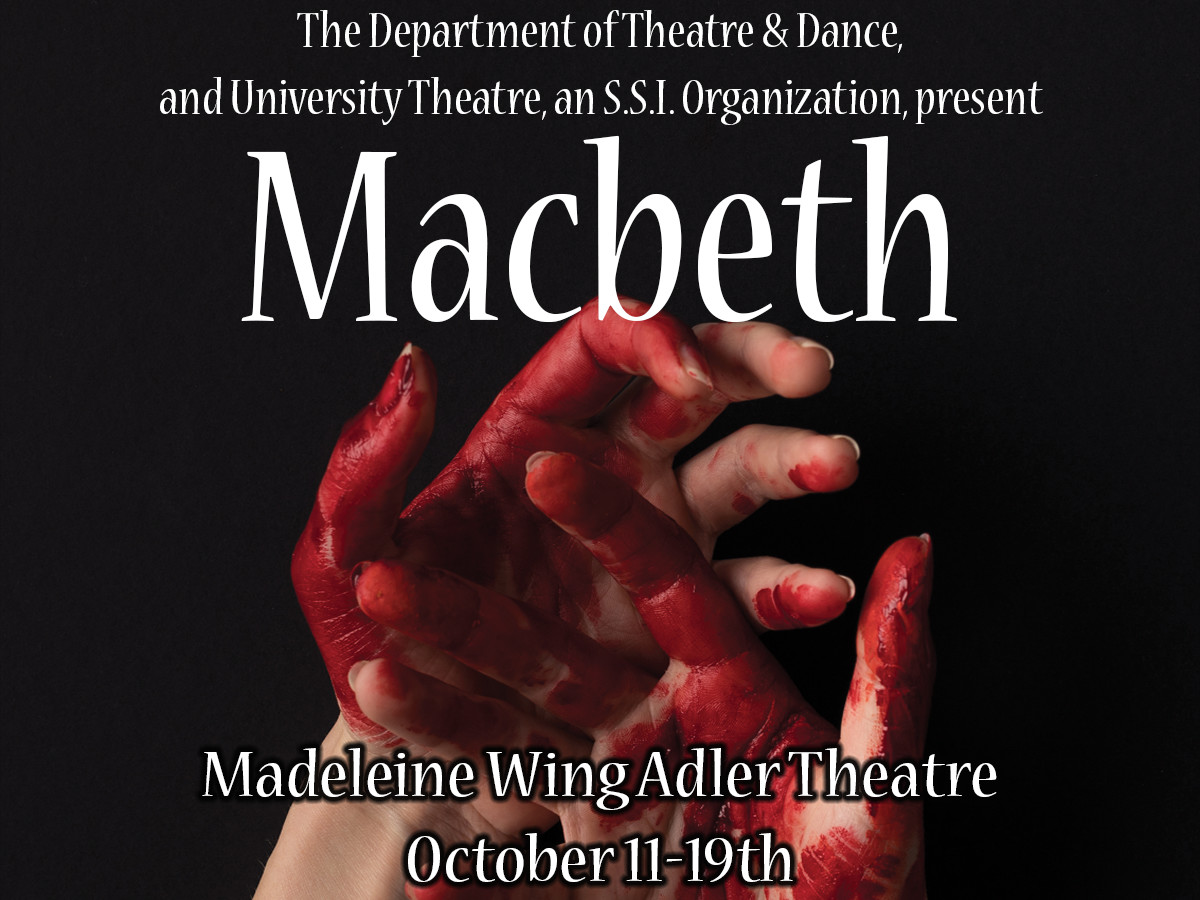 Photo courtesy of WCU Department of Theatre and Dance.

You see a haze. Flashes of light radiate from the stage and permeate your vision. There are bold cuts of blues and greens that fade into streaks of red and orange. Where are you? You expected to see men in tights and poofy shirts spouting verse. Isn’t this a Shakespearean play? Suddenly, your eardrums are pounding. Heavy metal music pours out from the giant speakers, and the floor vibrates under your feet. You glance toward the stage, but all you see are sleek silhouettes set against a violent backdrop. Swords are clanging, quarterstaffs are slicing the air, shields are banging and crashing to the ground. Is this a medieval battle scene or a heavy metal concert? Actually, it’s both. This fall, the Department of Theatre and Dance produces Shakespeare’s “Macbeth” — and the scene described is just the beginning. The world of this Shakespearean play is not what one would expect to see.

According to John Bellomo, theatre professor and director of “Macbeth,” the concept behind this heavy-metal, Shakespearean fusion was a natural one. “There’s something about this play that reminds me of that genre,” Bellomo says. With themes of murder, ambition and witchcraft bubbling about the cauldron, one thing is for sure: some dark forces surround this play and this production in particular. “I feel like I’m doing what Shakespeare would’ve done,” Bellomo says. He elaborates that the style of the show itself serves as a way to “bend time” between the Shakespearean world of “Macbeth” and our world. This unconventional marriage is what Bellomo and the cast and crew hope will invite audiences to attend, to check out all the bells and whistles, if not the expanded verse.

If you enjoy tales of murder, paranoia and suspicion, or simply want to get into the spirit of Halloween, then ‘Macbeth’ is the show for you.

The challenge, of course, of blending two different worlds is tackled in large part through the lighting and sound. According to senior lighting designer Myles Martin, Bellomo’s concept of a rock concert was right up his alley. “That’s kind of my style in terms of lighting design — flashy, kind of high impact, high intensity […] It was really nice kind of knowing that John and I were on the same page.” The process of creating an effective lighting design is an arduous one, but by no means unrewarding and the same can be said when it comes to sound.

Headed by senior sound designer Rachel Borczuch, the bridge between Shakespeare and modern-day life is based around making the right design choices that fit the style of the production, while still adhering to the script. According to her, the basis of the play is ambition, and ambition is at the heart of heavy-metal music. “It’s a really spectacular type of music,” Borczuch says, “and it’s driven itself through many, many decades, which I think is how it kind of relates to the world a little bit.” All in all, Borczuch claims the show is “gonna be really loud in the best way.”

“Macbeth” will run in the Madeleine Wing Adler Theatre in the Performing Arts Center Oct. 11, 18 and 19 at 7:30 PM and Oct. 12 at 2 P.M. Tickets are $12. To purchase tickets, please visit www.wcupa.edu/TheatreDanceTickets.

If you enjoy tales of murder, paranoia and suspicion, or simply want to get into the spirit of Halloween, then “Macbeth” is the show for you. Bring your parents, bring your friends, bring everyone you know because it’s definitely not “your grandma’s Shakespeare.”

Erica Barnes is a third-year student majoring in theatre with minors in dance and creative writing. EB922002@wcupa.edu