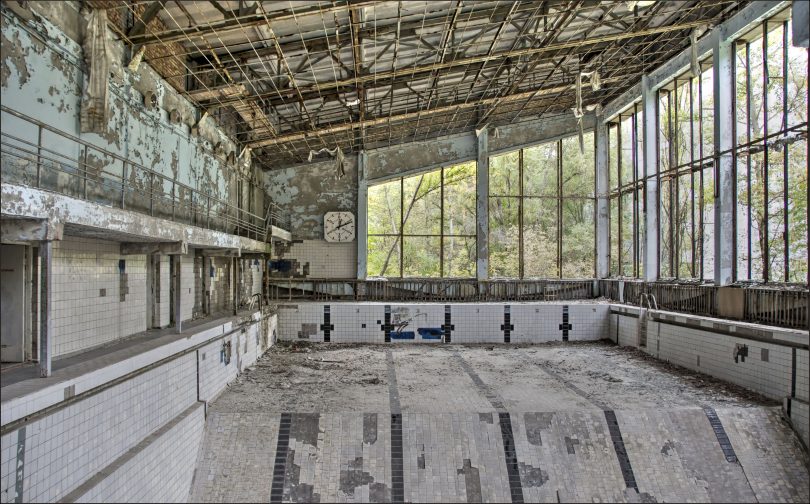 HBO’s “Chernobyl” opens with these resonant lines: “What is the cost of lies. It’s not that we’ll mistake them for the truth. The real danger is that if we hear enough lies, then we no longer recognize the truth at all. What can we do then? What else is left but to abandon even the hope of truth and content ourselves with stories? In these stories, it doesn’t matter who the heroes are. All we want to know is: ‘who’s to blame?’”

I have watched a lot of TV in my life to be sure. “Twenty-four,” “Lost,” “Breaking Bad,” “Game of Thrones,” “Twin Peaks,” “The X-Files,” “The Sopranos,” “The West Wing,” “Mad Men,” “Band of Brothers,” “Boardwalk Empire,” “Peaky Blinders,” “Ray Donovan,” “Mindhunter,” the list goes on and on. But never has a TV show touched me at the very center of my being quite like HBO’s “Chernobyl.” For those who have not seen the TV mini-series, the show follows the events of the nuclear disaster at the Chernobyl power plant in 1986, and the subsequent days, months and years following it.

Our main protagonists are Lyudmilla Ignatenko, a loving wife who constantly puts herself in danger out of love; professor Valery Legasov, one of the investigators into the events which surround the nuclear disaster;  deputy Chairman Boris Scherbina, a high-ranking Soviet apparatchik who is initially skeptical of the nuclear incident, but quickly helps to coordinate the clean-up along with Legasov; and Dr. Ulana Khomyuk, a nuclear scientist who helps Lagasov and Boris avert an even bigger nuclear disaster and pushes Legasov to tell the truth about what really happened at Chernobyl.

What really got to me about ‘Chernobyl’ is ultimately how heart-wrenchingly tragic the story is.

The show itself is a docu-drama, meaning that although some events were dramatized for the sake of storytelling, many of the names, locations and other details are left untouched. But what makes Chernobyl exceptional among other reasons is how dedicated the show is to be as accurate as possible. This is not just to give the show a greater sense of authenticity, but also to be respectful to the memory of those who died or were adversely affected by the nuclear disaster and not exploit the event to make a quick buck.

Everything from the architecture of the town of Pripyat, right down to the stick pins of the soviet bureaucrats, was carefully attended to by the production team — so much so in fact that even the people who lived through that time were stunned by how close to reality the show was.

Trying to describe the feeling of watching “Chernobyl” for the first time is hard to put into words, but I would describe it as both a mystery, as well as a horror show. Within the first few minutes of the first epsiode, the show sets its tone as Legasov, two years after the nuclear incident, record the truth of what actually happened at Chernobyl onto a bunch of casette tapes, leaving them in a dead-drop outside his appartment. He then leaves some food behind for his cat before comitting suicide inside his living room. By this point, the audience is already hooked as we want to know the real truth that Legasov talks about behind Chernobyl and why he kills himself exactly two years later to the day the incident happened.

The rest of the episode then flashes back to the day and time that reactor number four at the Chernobyl nuclear power plant exploded. As the enormous cast of characters scurry about trying to figure out what happened, the horrifying effect of the disaster has already begun to take effect. Plant workers start to develop severe radiation sickness, the first responders to the explosion are baffled about “tasting metal” in the air and a cloud of radioactive ash descends upon a crowd of onlookers who stand on a bridge to get a view of what has happened. This establishes the nuclear fallout from the disaster as a kind of horror movie monster — one that stalks the unaware cast and kill them one by one. Each death truly is terrifying to behold, but thankfully not exploitative.

The entire production is mind-boggling and I do not say that lightly. Two things that stand out besides the set design and costumes are its acting and writing. The entire cast does a remarkable job, but actors Jared Harris and Stellan Skarsgard are the standout performances. This is due in part to the writing from show creator Craig Mazin, which in my opinion sets a new benchmark for writing in a television series.

What really got to me about “Chernobyl” is ultimately how heart-wrenchingly tragic the story is. It is not meant to be an indictment of socialism, nor is it meant to make a boogeyman out of nuclear power. The story is about the cost of lies, and how it is never the people who created the lie who will suffer the consequences of their actions, but the public who will bear the consequences of the lie. Looking back, it is important that this show came out when it did, as the truth of what happened at Chernobyl has been blurred by the Russian government both when it occurred and since then. Thankfully, the HBO mini-series has revived the international public interest in what actually happened at Chernobyl as well as the heroism of ordinary Soviet citizens during one of the worst man made accidents in human history.