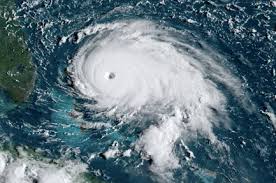 Hurricane Dorian is being recognized as the second most powerful storm to churn in the Atlantic Ocean, number one being Hurricane Irma. Dorian tragically took the Bahamas for everything they’ve got with the death toll rising from seven  to 20; three people were found dead in Grand Bahama, while the other 17 were discovered in the Abaco Islands. When Dorian made landfall on the Bahama islands it was a category-five storm, it has since then diluted to a category two. Meteorologists were certain the storm’s trajectory would run through Florida and the Carolinas, though that has since changed as well; Hurricane Dorian is brushing offshore.

Major companies such as Walt Disney World, who was expected to get slammed by Dorian, pledged $1 million in relief efforts to the Bahama Islands. Residents of the Bahamas are now reacting to the brunt aftermath of the horrendous hurricane. Nassau citizen, Sandra Cooke, stated that her sister-in-law was trapped under her roof for 17 hours, and now cannot walk.

The International Red Cross is stepping in to find blood donors as part of relief efforts in the Bahamas. According to redcross.org, more than 1,900 Red Cross responders are working around the clock to distribute meals, hygiene items, tarps, and hand-crank cell-phone chargers. Meanwhile, a Florida man bought 100 generators at Costco, all to be delivered to the Bahamas by boat. Food and chainsaws are also being sent from the man as well.

Hurricane Dorian is being recognized as the second most powerful storm to churn in the Atlantic Ocean.

Politically, a few United States Senators cordially wrote a letter to the Trump Administration to relax immigration requirements for Bahamians. Senators are also working to waive visa requirements to allow Bahamians to stay with U.S. families as their country works to slowly redevelop.

In any storm surge situation, it is always crucial to prepare for the worst and hope for the best. Florida did not receive the brunt it was projected to, though it was still a state requirement that shelters were equipped and necessities were easily accessible. In 2011, the East Coast suffered from the aftermath of Hurricane Irene, especially the New York and North Jersey beaches. My community and surrounding communities in the Philadelphia tri-state area brought food and water to the lowest points in our homes awaiting the expected tornados and hailstorms. Irene managed to physically pick up my trampoline; it was found around the corner the next morning. Even worse, many people in my neighborhood lost their homes to fallen trees and powerlines.

What if that was your house? Your sister-in-law? Storms are unpredictable and out of our control. Although this is true, you can still be of assistance to victims. Visit redcross.org, text the word DORIAN to 90999 to give a $10 donation or call 1-800-RED CROSS. Your dollar will feed a Bahamian affected by Dorian as well as provide the resources for emotional support throughout this rough adaption.