The war with spotted lantern flies 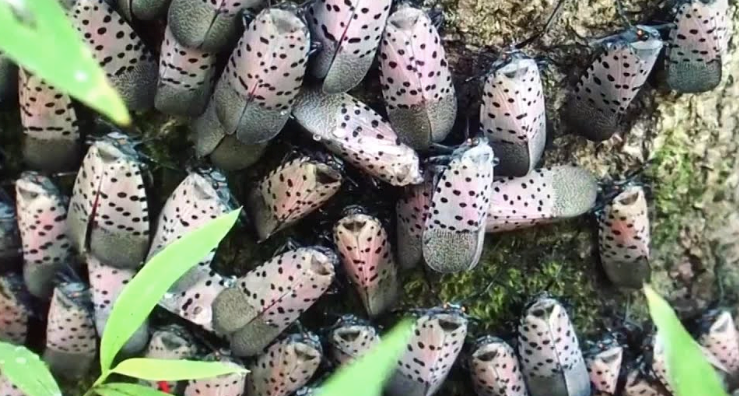 Photos by Pennsylvania Department of Education

We are at war… with the spotted lantern fly, that is. This little insect is causing a lot of damage to Southeastern PA’s ecosystem and economy. It is up to us to battle these bugs!

The creature itself does not look so harmful. It is small, about an inch long, with three wing layers: the top one being brown with black dots, the middle having black and white stripes and the rear wings bright red in color with tiny black dots speckling it. If you glance quickly, it almost looks like a butterfly, except for its fat, bumblebee-like body. Its name, just like its appearance, is equally deceiving since the insect hops more than it flies.

These Asian bugs could have been just another one of the thousands that call Pennsylvania home if it were not for its eating habits. Instead of roots and leaves, the lantern fly feasts on plant stems, sucking the sap out of it and leaving mold and fungus in its place. The mold in turn kills the plant. According to Chester County’s Health Department, spotted lantern flies consume crops such as fruit trees, grapevines, hops, hardwoods and ornamentals, though they are harmless to people. These little beasts are so hard to control since they lay eggs in groups of 30-50, meaning the lantern fly population is growing extremely fast. Humans are the only predators the lantern fly has to fear since there is nothing in nature to combat this insect.

Pennsylvania officials quickly realized the social threat the lantern fly poses, jeopardizing both the income of PA’s flourishing agricultural industry, as well as the people whose jobs are related to harvesting produce. Since it was discovered in Berks County in 2014, the planthopper has been seen in several surrounding counties. Governor Tom Wolf responded by placing Southeastern counties in quarantine to minimize a broader infestation and prevent the bug from traveling to nearby states, though there have already been sightings in Delaware, New Jersey and New York. The 14 affected counties in Pennsylvania include Berks, Bucks, Carbon, Dauphin, Delaware, Lancaster, Lebanon, Lehigh, Monroe, Montgomery, Northampton, Philadelphia, Schuylkill and, yes, Chester. For individuals, the quarantine means checking camping gear, gardening tools and building materials for the lantern fly and its eggs. If found, the insects or eggs should be immediately destroyed. Many locals and students face issues with lantern flies, such as third-year student Ryan Hayman, who explains that his house in West Chester “is infested. We let them all live, not knowing what they were. Eventually, I noticed a swarm of nymphs outside – and that’s when we had to go on the offensive.”

To win this war against the spotted lantern fly, we need to act! Some steps that can be taken include keeping an attentive eye out to catch and kill the bugs and eggs before they spread. Host trees, like the Tree-of-Heaven, which the bug is attracted to, should be removed and pesticides can be sprayed to kill the lantern fly before we even spot it.

Cars, outdoor items and even our backpacks should be searched to ensure we are not carrying this beast ourselves. According to a science-based educational organization, Penn State Extension’s website, the lantern fly usually lays eggs in autumn and winter. They nest on flat surfaces, like tree trunks or rocks, in neat rows. The egg masses are camouflaged by a tan or gray coating of mud, which looks cracked when dry, locate it and scrape it off. From there, smash them, burn them or put them in a solution of rubbing alcohol or hand sanitizer permanently. Additionally, simply kill spotted lantern flies any time you see them.

The Chester Valley Trail has dispersed posters warning community members of the spotted lantern fly, urging them to keep an eye out in order to preserve the flora of our community. When driving to somewhere not affected by spotted lantern flies, carefully search your vehicle for any trace, and be sure to kill them before driving away to reduce the possibility of spread. Become familiar with all life stages of the spotted lantern fly so that you can easily spot them and eliminate any you see. If you have trees or crops that they commonly feast on, check them daily for any signs of damage, and wrap the tree trunks in sticky tape to trap nymph spotted lantern flies.

Ashley Martindale is a fourth-year student majoring in psychology with a minor in Spanish. AS872892@wcupa.edu