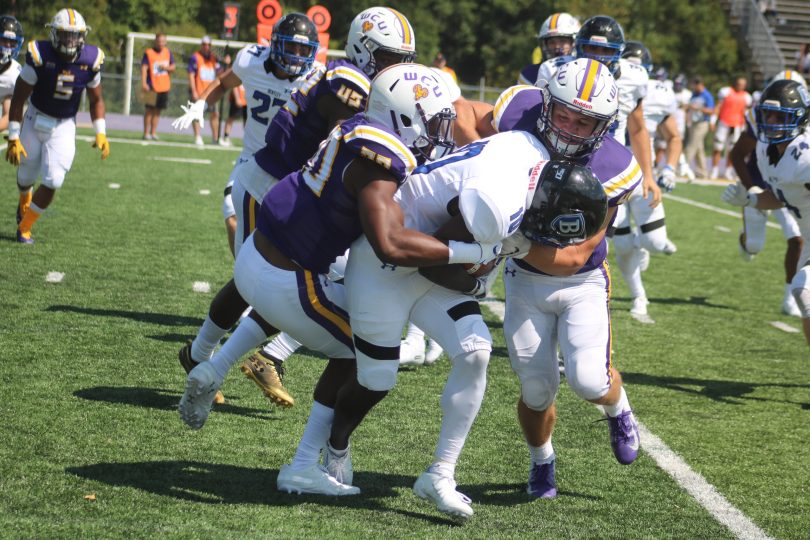 School is in session and the ball has been kicked off the tee as the West Chester Golden Rams officially opened their 2019 season at John A. Farrell stadium against the Bentley Falcons. It did not take long for this game to get physical as both teams shared blows on the field. After a Falcons penalty mid first quarter on a West Chester punt, the Golden Rams elected to go for it on fourth down resulting in a mishandled snap by West Chester.

The Falcons recovered in Golden Rams territory and capitalized without hesitation as they rumbled into the endzone on a 20-yard run to put the Falcons on the board first, 7-0. After an offensive drought, Golden Rams’ tight end Dan Neuhaus set a spark, reeling in 2 catches for 41 yards. After two straight catches for first down conversions by Nehaus, the Golden Rams could not make an impact on the scoreboard as Dooley ended the drive early with a redzone interception.

Despite the turnover, the Golden Rams held their own with a bend, but not break defense. Despite struggles against Bentley’s punishing rush attack the Golden Rams found themselves only down by a possesion in the second quarter. Redshirt Freshman Ja’Den McKenzie refused to go down as the 6’1, 205 lb runningback gained his yards in bulk with four carries for 41 yards in the first half. The physical running by McKenzie gained momentum but could not break the deadlocked score of 7-0.

After a West Chester fumble late in the first-half the Golden Rams defense found themselves with their backs to the wall in their own endzone. However, the defense stood true to their bend, but not break personality; keeping the Falcons out of the endzone and giving the team a spark of hope with a blocked field goal by sophomore defensive back Sterlen Barr in the final seconds of the half.

After the stagnant first half, the Golden Rams came out fired up. Ja’Den McKenzie continued to run over, run through and run past Falcon defenders with an immediate 27 yard run into Bentley territory at the beginning of the third quarter. If McKenzie was Mr. Reliable on the ground, Neuhaus was Mr. Reliable in the air. Dooley found Neuhaus 25 yards down the seam wide open to tie the game up at 7-7.

Late in the fourth quarter, the game continued to be a tug of war at 7-7. After another Golden Rams turnover in their own territory, the Golden Rams defense met their challenge head on, blocking yet another redzone field goal by sophomore defensive back Nyeem Jones. With 28 seconds left in the game, the Golden Rams’ Mr. Reliable, Ja’Den McKenzie broke out of the backfield and up the sideline for the 30 yard run into the endzone.

The Golden Rams stout defense made confirmed the win in the remaining seconds. The defense was led by senior defensive tackle Tyrone Barge who led the team with 10 tackles. Junior safety Jordan Burney and redshirt freshman linebacker Jackson Taylor had eight tackles. Sterlen Barr finished with seven tackles and a few key pass breakups. But the biggest factor in the first win of the season was the rushing performance by Ja’Den McKenzie. McKenzie finished with 10 carries for 112 yards and a touchdown. McKenzie spoke about his performance and how much the moment meant to him saying, “I worked hard to perfect my craft and when I got by him (the Bentley defender) I saw green and I scored.”

With a revamped backfield and stingy defense the potential for this Golden Rams season is looking promising.

The Golden Rams are now moving onto their next test in Erie, they face off against PSAC West team Gannon University.