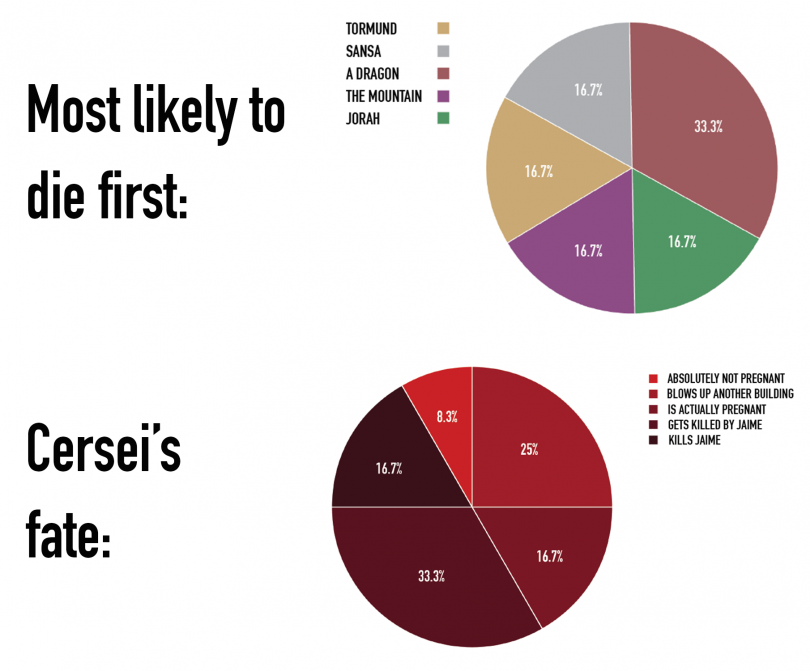 “I believe that, by the end of the final season of Game of Thrones, the Night King will be on the iron throne. As we have seen in the show’s previous seasons, the writers of Game of Thrones are not interested in satisfying audiences, in a conventional sense; we don’t get what we want. Thus, because most viewers want to see either Daenerys Targaryen or Jon Snow on the throne, I believe that it is reasonable to say that the show will instead end on a very dark note. The only character that I believe is completely safe (or as close as a character can get to being ‘safe’ in this show) is Tyrion Lannister. Audiences love that character too much, so the writers are unlikely to kill him off. But then again, that is exactly the sort of thing that Game of Thrones writers are known to do.”

“Season 8 will be more intense than a college student’s finals week, and that’s saying something. All I know is that Jon Snow will end up on the Iron Throne and Sansa will become Lady of Winterfell.”

“Three words: Dragon. Lady. Queen. I’m not a Game of Thrones fan, but I’ve read the first book and have watched one episode of the show a few years back. Danaerys is awesome, and although I can’t even remember the names of the majority of the characters, she stood out to me among all the rest. I want to see a character like her reign queen across the land of Game of Thrones, and with how cool she is, I bet it’s going to happen one way or another.”

“Benioff and Weiss have stated the ending will be ‘bittersweet.’ With this in mind, I think the ‘good guys’ will win, but at a cost of great sacrifice. I think Jon is going to live, because they won’t pull his death twice, and I think Dany will survive as well. Tyrion, however, will die a healthy and noble death becoming of a lord. Maybe Jon and Dany will name their kid after him, who knows. Bran will become the next Night King beyond the wall, ushering in an era of peace, and Sansa will pass away somehow, because one Stark has to die, and it better not be Arya. Jaime will kill Cersei, and maybe die in the process. Last but not least, our best friend, Samwell Tarly, will be tasked with writing a recount of the events of the war. He’ll end the series by beginning the book, ‘A Song of Ice and Fire.'”

“I have no evidence, okay, but let’s just say it. Bran is the Night King, Arya is going to kill a whole bunch of people, Tyrion is going to die (just because he’s a fan favorite) and Cersei is going to blow up another building. 10/10.”

“I have no idea what to expect for Season 8, but yet I know that Theon Greyjoy will have revenge and kill Euron Greyjoy. Daenerys will sit on the Iron Throne.”

“In seasons 1 through 7, the big surprise was that everyone died, so I think that no-one’s going to die in Season 8 because that would be too predictable. It’s going to end with a shot of all of them riding a dragon and Tyrion saying ‘the real iron throne was the friends we made along the way.'”

With several instances that have been indicative of her morals leading up to this summer, author of the beloved “Harry Potter” series, J.K. Rowling, really utilized her downtime...