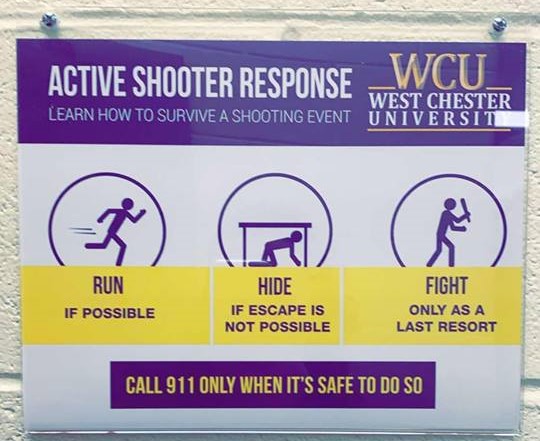 There are 18 academic buildings on West Chester University’s North Campus; go on an eye-spy search in any of them – specifically Main Hall, Marion Science Center or the Business and Public Management Center – and look for “the signs.” You might not even know what signs I’m referring to: they’re small, hanging on the walls in WCU purple and gold and over the last few months they’ve been popping up in the academic buildings, going largely unnoticed.

They’re the “Active Shooter Response” signs: instructing how to survive a shooting event. Step one, run if possible. Step two, hide if escape is not possible. Step three, fight only as a last resort. Call 9-1-1 only when it’s safe to do so.

The signs are, for lack of a softer word, ineffective. Most students aren’t even aware of the instructions that have been tacked onto the walls of their classrooms, and if they are aware, they haven’t really taken the time to read them. My roommate was completely oblivious to their presence, and a different friend had gone so far as to read the signs, but she couldn’t tell me anything beyond the basic three rules. The scariest part is – even if said friend had sought out a better survival guide using the university’s resources – she would have found a decent amount of information, but it still wouldn’t do much for her in the event of a real emergency situation.

Beyond the signs, the university offers a 10 minute “Active Shooter Preparedness Video” (courtesy of the University of Georgia) on the West Chester University website, which shows how-to reenactments coupled with documentary-style advice from local officials. There’s an “Emergency Response Pocket Guide:” a pamphlet that gives advice to students in case of all emergencies – from winter storm safety to school shooter response – goes into a bit more detail on the three points. An entire section on Public Safety’s portion of the WCU website has been dedicated to an Active Shooter FAQ, coupled with a link titled “Classroom Safety” – a FAQ specifically designed for the university. It starts off with the flashing liability that “no institution can guarantee absolute safety in the classroom or on campus grounds,” before breaking off into how-to sections with everything from key actions to preplanning, evacuation, sheltering and a “my plan” checklist.

It’s been a little over a year since the Stoneman Douglas High School shooting in Parkland, Florida, and like a ripple effect, many school institutions have since put into place preventative measures or increased their own through attempted awareness and action procedures. It’s part of the reason we now have the glanced-over “Active Shooter Response” signs hanging throughout campus.

However, prior to the massacre, Stoneman Douglas High School had increased security measures too and they had their own active shooter training in place. It still wasn’t enough to stop a gunman from killing 17 people and wounding 17 others.

Have you ever heard the sound of a gunshot? I had a professor last semester sit on a desk and break it clean in half; that sound made me jump more than the sound from a fired gun. Overall, it sounds like an echoed firecracker, or even a heavy book being dropped on the ground. Depending on the type of gun, length of barrel, shell size, use of a silencer: the sound of a gunshot is always different and often times unrecognizable.

Recognition, response/action, and outcome ­­– they play off of one another, and in the event of an actual active shooter scenario, the procedure will be met with the unexpected. It doesn’t matter how much prep is put into a pamphlet. The university has improved its safety measures – even the hanging of the unread signs is a step in the direction of improvement– but the only way to ensure complete protection from gun violence is through nationally banning the weapon.