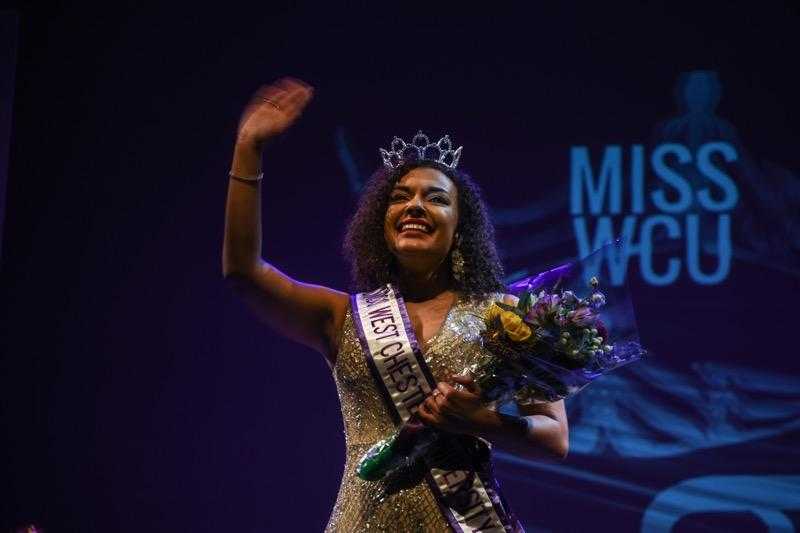 Chase Sanders, a junior majoring in vocal performance with a minor in psychology, won West Chester’s Miss WCU pageant on Feb. 2, taking the crown and coveted title of Miss WCU 2019. Sanders is involved in multiple organizations, including choir and opera, social media coordinator of the ACLC and a School of Music mentor.

She has never competed in a pageant before, so winning was “thrilling… just pure shock.” Sanders took the stage in the Emilie K. Asplundh Concert Hall with excitement and high hopes, but said she never expected to win. On top of taking the crown, she won best casual wear as well as evening wear, and sang an opera piece for her talent portion. “My main goal was to be in the top five,” Sanders said, and winning gave her “an immense amount of gratitude.”

Sanders had nothing but good things to say about the process and her fellow contestants as well. She remembers filling out her paperwork in the beginning and getting excited for a new experience. She recalls learning the opening number and walking patterns at rehearsals, and said, “All of that time you get to know the other contestants. I think I’ve grown really close with a lot of them, ones I already knew and ones I didn’t.” She says making friends with the contestants was her favorite part of the experience.

‘She [Sanders] has never competed in a pageant before, so winning was, ‘thrilling… just pure shock.’

The platform she chose for the pageant was the Fresh Air Fund, a nonprofit that provides children living in the boroughs of New York City to spend a week with a host family outside of the city for a week. Her family has done it for two years and is planning to do it for a third this upcoming summer. “They say the experience is for kids, but it’s also for the families that participate,” she said.

As for her new role as Miss WCU, Sanders is looking forward to “being a role model that leads with kindness, compassion and inclusion. Everyone who steps on this campus should feel valued and like they matter and are represented.” She’s especially excited to work with kids, something she’s done before as a dance assistant in high school. In addition to the Princess Tea at the library and the Read Across America programs, she’s excited to work close with her platform that works with kids aged 7-12. “I’m excited to know the kids more on a personal level that come to West Chester.”

Sanders says she is grateful to everyone who has supported her on her journey to becoming Miss WCU 2019, especially her family, close friends and classmates at the School of Music. “Seeing everyone there after the pageant, just the overwhelming amount of support, meant the absolute world to me,” Sanders said. “My family came through, and I am so grateful.”

As for any advice she would give to anyone considering competing in the pageant in the future, Sanders said, “You’re going to get so much out of it and learn so much about yourself and people around you. Being up on that stage gives you confidence that you never knew you had or needed. Just prepare to have lots of fun and no matter what happens you’re bringing awareness to a great platform. For me, the people you meet is the highlight.”

Sanders is excited and ready to take on the responsibilities of being Miss WCU 2019, and is excited for the upcoming year and the opportunities it will bring her.