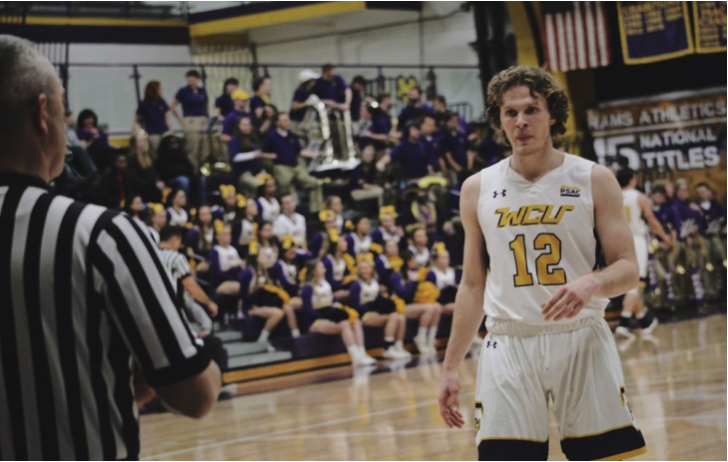 For the West Chester University men’s basketball team, it was a good end to 2018. It has been an even better beginning to 2019. The Golden Rams are currently on a 10-game winning streak and haven’t lost since Dec. 18, when Indiana University of Pennsylvania (IUP) dealt them a loss. This is the second time in the last two seasons that the Golden Rams have reached a streak of double-digit wins.

With the help of senior standouts Matt Penecale, Jackson Hyland and Frank Rokins, the Rams have found themselves on top of the PSAC East.

For team captain Penecale alone, it has been a memorable senior season. Due to an injury, he missed four of the first five games of the season, and the team record showed they needed their captain on the court. With a 2-3 record, the team needed a turnaround. When he returned, he played limited minutes and slowly, but surely, found himself playing his normal minutes.

Now, he’s back to running the show, and the team holds a record of 14-2 since his return, leaving them with a 16-5 record overall.

Penecale’s unselfish play has found him in West Chester’s record book. In a win against University of Pittsburgh-Johnstown on Wednesday, Jan. 30, he tallied six assists to land him the No. 1 spot on WCU’s all-time career assists list.

“This milestone has meant a lot to me. My focus is always on winning, so to be a part of such a fun team and earning the record on a win meant more than anything to me,” Penecale replied when asked to speak on his accomplishment.

In the win over Pitt-Johnstown, it wasn’t hard for Penecale to break the record. It seemed that no matter who he passed it to, they would score —  as four members of the Golden Rams scored in double digits.

The team started the game with four straight points and led for the rest of the game, on their way to a 70-58 win over the Mountain Cats.

WCU’s next opportunity to contribute to their streak will come when they travel to Bloomsburg University. When the Huskies of Bloomsburg visited Hollinger Field House on Jan. 12, the Golden Rams walked away with an 86-63 victory.

Along with continuing their streak, WCU will look to improve their impressive record of 11-2 in PSAC play. The Golden Rams also hold a 7-4 record in road games, and three of their final seven games will be played away from Hollinger Field House.

Penecale also has an opportunity to add to his stellar senior season. With six points, he will pass the 1,000-point mark for his career.

“I want to thank my coaches for putting me in a position to be successful,” Penecale said. “And my teammates have been amazing. I literally couldn’t do it without them. After I broke the record, they were so happy for me and I think that really shows we are more than a team; we are a family. I couldn’t ask for better teammates to do it with.”