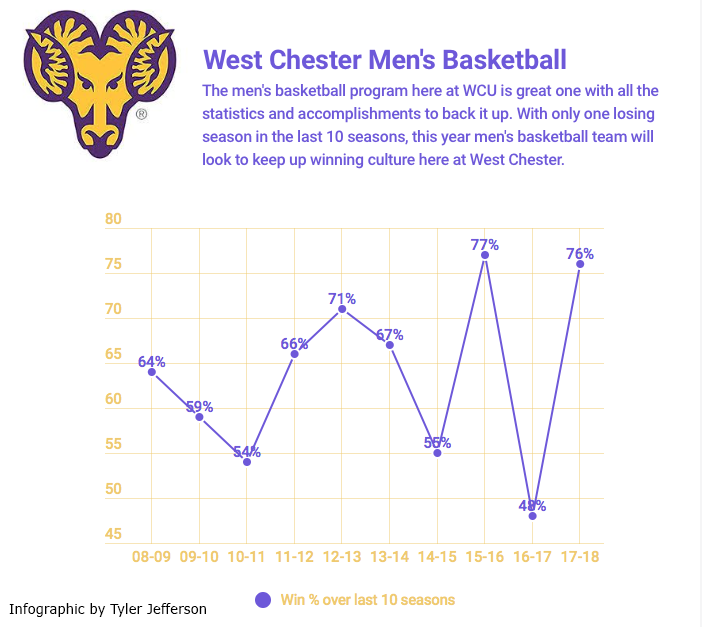 Basketball season is finally here, and West Chester’s men’s basketball team will look to accomplish even more than they did last season.

Last season’s Golden Rams finished the season with an impressive 22-7 record. They also claimed their first ever NCAA Tournament victory with a win against Wheeling Jesuit University in the opening round of the tournament. The Cardinals of Wheeling Jesuit were the favorite going into the matchup, but West Chester was able to escape with a five-point victory to give them their first tournament win.

Unfortunately, West Chester came up short in their next game against familiar opponent East Stroudsburg University in the NCAA Atlantic Regional Semifinal.

The feeling of coming up short in the tournament will fuel this year’s team to compete harder than ever going into this season.

“As a senior, I want to go out there every night and give it my all. This is my last ride, and who knows when it’ll be my last time playing in the purple and gold,” said fourth-year guard Matt Penecale (Jenkintown, Penn. /Abington) when asked about his mindset going into his senior year.

Penecale was chosen as the team’s captain this season and is only a piece of the Golden Rams’ strong returning core. Penecale and fellow fourth-year guard Jackson Hyland (Avondale, Penn. / Kennett) were both awarded All-PSAC East Second Team honors. Also returning is 2018 PSAC East Defensive Athlete of the Year Frank Rokins (Plainfield, N.J./ST. Mary’s). Last but not least is junior guard Malik Jackson (Lansdowne, Penn. /Penn Wood) who will finally make his return after sitting out last season. Last time Jackson was on the court, he put up 19.2 points per game and his return will be vital for West Chester’s backcourt.

The Golden Rams also managed to add four newcomers to their already-talented roster.

WCU will add three first-years and one transfer. First, Kyle Thompson, a scoring guard from St. Joseph’s Prep who will add more to the WCU’s dynamic backcourt. WCU’s frontcourt will also gain much help as they add two 6’8ers in Nick Alikakos from The Hill School and Josh Samec of Hazleton. Coming in from NCAA Division I Loyola University is 6’5 Ian Landendoerfer.

WCU has a very talented roster, and it isn’t hard to notice. Their squad has them as the favorite to win the PSAC East Division crown, according to the conference preseason poll that was released by the league office within the last week.

The Rams managed to gain six of the possible eight first place votes to grab the top spot in Thursday’s poll, ahead of East Stroudsburg and Shippensburg who split the remaining two votes in the ranking.

WCU will start their season on Friday, Nov. 9 against West Virginia Wesleyan on the campus of West Liberty at 5:00 p.m. as part of the MEC/PSAC Challenge.  After finishing the cross-conference challenge with games against both WV. Wesleyan and West Liberty, the Golden Rams will play their next two contests inside the Hollinger Field House, starting with a game against Chestnut Hill on Nov. 15 at 7:00 p.m.