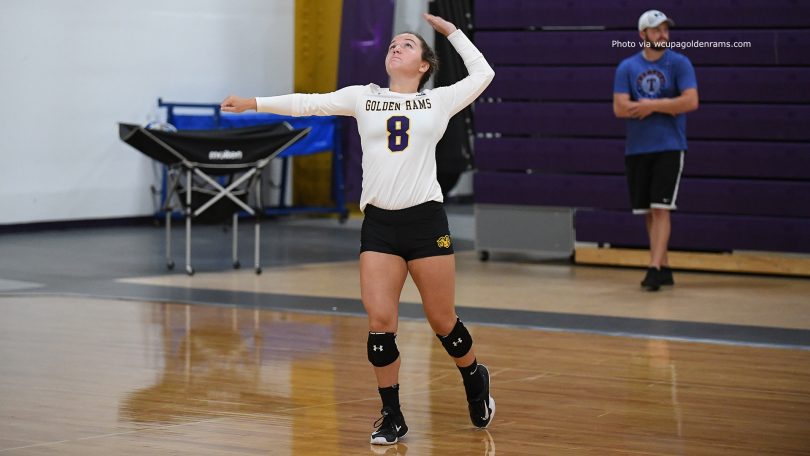 After their week-long break and some time to regroup and practice, West Chester Volleyball returned to action trying to break their five-game losing streak, which started back on Oct. 9. They hosted the Indiana University of Pennsylvania, who in comparison to WCU has struggled even more in PSAC play with a 3-10 record.

West Chester finally returned to the winning column when they defeated the Crimson Hawks in four sets (25-21, 25-19, 22-25, 25-23). Although this match was against a lesser opponent in terms of standings, it is a good sign for WCU to have three sets of hitting percentages over .200. On the other hand, IUP had a combined hitting percentage of .099 for the match.

First-year outside hitter Sarah Polacek finished the match with 18 kills, which was the game-high. She was followed by fellow first-year Julia Vreeswyk who had 11 kills and contributed three blocks. Defensive specialist Rachel Hutchinson, yet another first-year player, led the team in aces with two. She also added two assists. Grace Whitney served up an ace of her own, while also being stout on the defensive end with three blocks. Team captain Jillian Grammer did her part as she has all season, dishing out 42 assists which was tied for the game-high. Grammer also finished with the team-high in digs with 30, chipping in an ace and two blocks as well. Defensive specialist Nicki Yates played a good game, finishing the match with 27 digs and 7 assists. Allie Duffy and Megan Shaw played well in support with nine kills and 13 digs respectively.

West Chester had little time to rest, as their next game was Saturday, Oct. 27. The Lady Rams hosted Clarion University looking for their second win in a row. Sadly, WCU could not pull off the back-to-back win as the two squads traded sets until Clarion sealed the deal (25-16, 25-27, 25-22, 23-25, 8-15). West Chester had Clarion on the ropes up two sets to none, but Clarion pulled off the comeback with a convincing final set. In the final two sets, WCU had a hitting percentage that was negative. Clarion had a percentage of .312 in the decisive fifth set.

This match saw even more players get involved. Third-year right side hitter Rachel Robb led the team in kills this time around with 18, followed by Duffy and Vreeswyk with 11. Duffy led the team on the defensive end with five blocks. Second-year middle hitter Olivia Rudjord served up two aces which was a team-high. Grammer made her presence known in the loss, still racking up an incredible 49 assists, 24 digs and two blocks. Yates finished the match with 30 digs — which was a game-high tally as well as four assists and an ace. Fourth-year defensive specialist Alex Gleason played well, contributing 11 digs to the cause. Polacek chipped in two blocks and Hutchinson chipped in an assist.

Head Coach Katherine Bellaver had this to say after the Clarion game: “Sarah Polacek did a great job on the outside and Jillian Grammer was tremendous defensively.  We took Clarion to the limit and we had opportunities to put that match away but just could not produce the offense needed to win. Our defense and serving were solid but we could not finish. Tuesday will be a great match and we are looking forward to next weekend to honor our seniors.”

On Oct. 30, the Lady Rams travel out to Millersville University to take on the Marauders. They return home to face off against East Stroudsburg University and Kutztown University on Friday and Saturday respectively. However, there is more than one game on Saturday since Virginia State University plays WCU as well. The Kutztown game is at noon, and the Virginia State game is at 4:30 p.m. Come out and support the team!

The 2020 NFL season has been hanging on the head of a pin ever since day one. The NFL’s dream of putting on the first, unabridged, regular season of any sport since the beginning...

On Oct. 9, when President Fiorentino announced the reconsideration for spring athletics, many athletes and coaches were given hope that they could, in fact, play this school year...