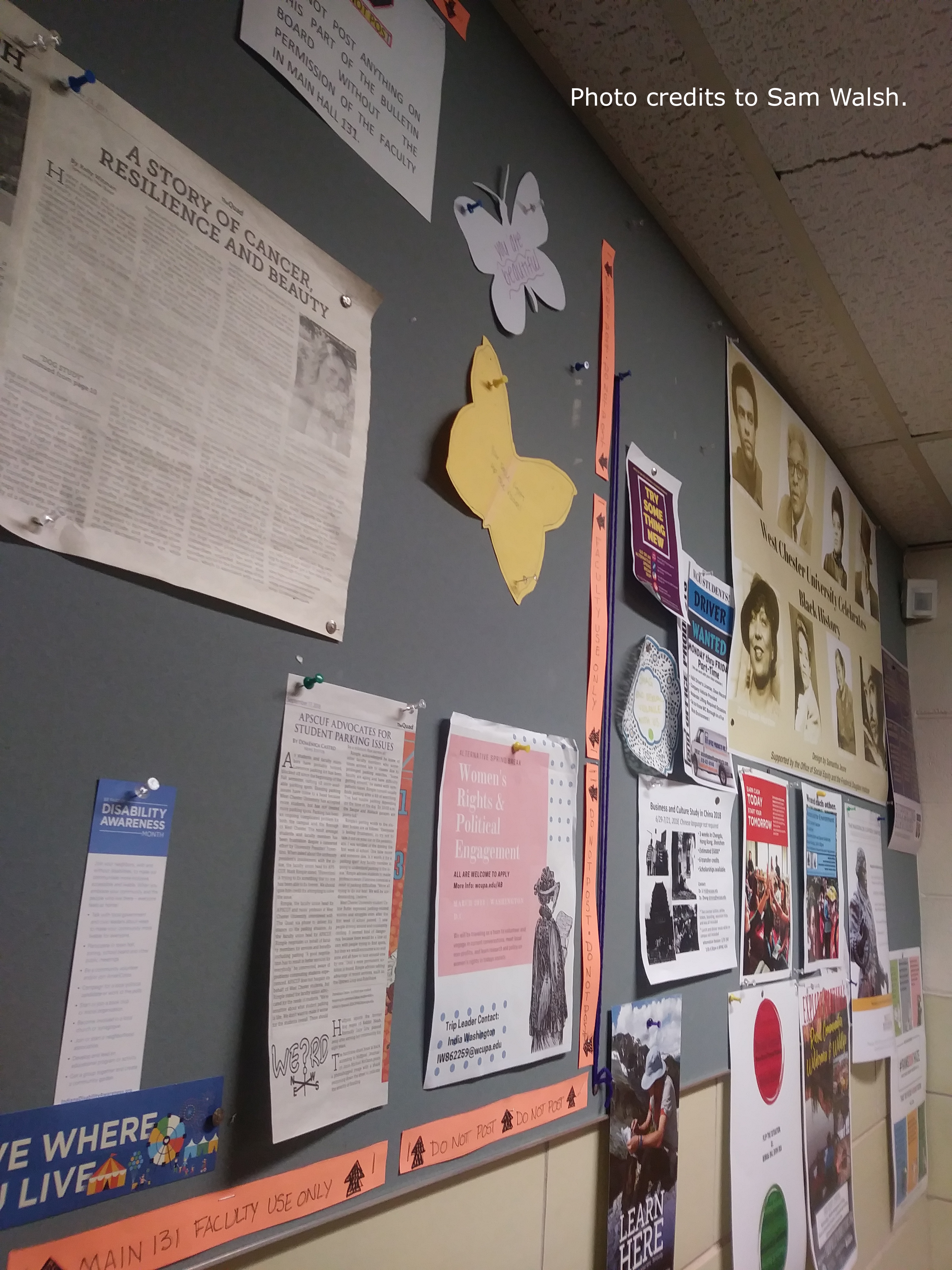 Students are probably aware of the numerous signs and posts around campus advertising “student work” for $16-$18 per appointment (or per hour). They advertise under the names “ChestercoStudentWork,” “WorkForStudents,” and, more recently, “MontCostudent” work. These are branches of the company Vector Marketing, a subsidiary of Cutco. Cutco manufactures kitchen supplies such as forks and knives. Around West Chester University’s campus, their different forms of advertising can be found written on classroom boards and posted in Main Hall. Numerous news articles, blog posts and Glassdoor reviews online have detailed people’s descriptions of Vector’s unclear or dishonest advertising practices and means through which they reportedly target students recently out of high school or college. As independent contractors of the company, Vector salespeople are expected to make appointments with friends and family members to sell knives. Payment and commission for sales vary from state to state; however, numerous sources online have reported that this information is not clearly stated. Students Against Vector Exploitation (SAVE), an online, student-run organization which worked to expose Vector’s dishonesty, revealed Vector hires people as independent contractors, and not employees. According to SAVE, they have been able to get away with not paying their contractors for their training or conferences, and not giving clear instructions, since contractors are not legally considered real employees.

Vector Marketing has faced numerous lawsuits since the company’s beginning in 1981. The Arizona Attorney General sued the company in 1990, which required the business to reform its “deceptive recruiting practices,” according to the Independent. In 1994, Vector temporarily stopped recruiting in the state of Wisconsin after being ordered to stop their deceptive hiring practices. Over 940 Vector contractors surveyed in the state reported earning no money or losing money while working for the company.

In 2008, Vector faced a $13 million settlement to its contractors in California after being sued when an employee alleged that she had to pay over $100 for her knife kit and was never paid for training. After the lawsuit, Vector no longer has employees pay the deposit. The company faced another $6.75 million preliminary settlement in 2016 for violations of the Fair Labor Standards Act in California, Florida, New York, Illinois and Michigan when workers sued for going unpaid for their trainings despite being independent contractors. Another lawsuit in 2014 alleged that a girl was violently sexually assaulted by one of her customers while working for Vector and sued the company for not providing her with adequate training to prevent the situation.

“The interviewer asked me very vague questions that are typical of an interview, but she made sure to never explicitly state what exactly I would be doing. She brushed around the subject and said I’d be doing sales and customer service. She said she’d like to offer me a job and gave me a date and time to come back for training.”

She said that she only learned she would be selling knives during the training, which she was not paid to attend. Despite being told she would not need transportation, she found it difficult to perform her duties without it. In the month she worked for the company, she made $50. She explained that employees were told they were not working hard enough if they were not making enough money. During the work conferences, she described that the district manager would show off his car to get employees to make more money. After being told she would need to call the office to gain more work hours, she received no answer and decided to quit.

“They were secretive and money- hungry,” she said. “It’s not a real job opportunity; it is just a huge pyramid scheme that preys on desperate students.”

A second anonymous student found the company after he saw the posters advertising their pay rates. He thought the pay was per hour, and not per appointment.

“Even when I learned that [the pay] was $16 per appointment, I thought they were going to give you appointments on a regular basis.”

He noted that Vector does not give employees appointments and that they must make ones themselves. He thought that the training was enough to prepare him for the job, but described it as “creepy in retrospect,” and that he felt that he wasn’t supposed to “ask any questions you aren’t supposed to ask.” When he asked about safety, he said that the Vector management “immediately, and quite harshly, shot me down.”

He was also not paid for his training or the conference he attended where the manager showed off her car as something she was able to buy because she worked for Vector.

The student said that they constantly “hounded” him to call his friends and family to sell knives every day. He said that he was successful in his appointments, even if it was just getting people to buy two knives, but it was his lack of adequate payment and his violation of ties with family and friends that made him finally quit.

“I had filled out the direct deposit, and I remember monitoring it every week when I made a sale to see if I got paid. And the thing was, I had made sales that were in the hundreds. They had taken almost the lion’s share of all that you made, and you got barely $60. They told you that you get ‘a commission,’ but you were never told how much that was.”

He believes the commission was less than 5 percent.

A representative from Vector Marketing will be on campus on Tuesday, Oct. 16 from 6-7 p.m. in the Business Public Managing Center room in room 204.