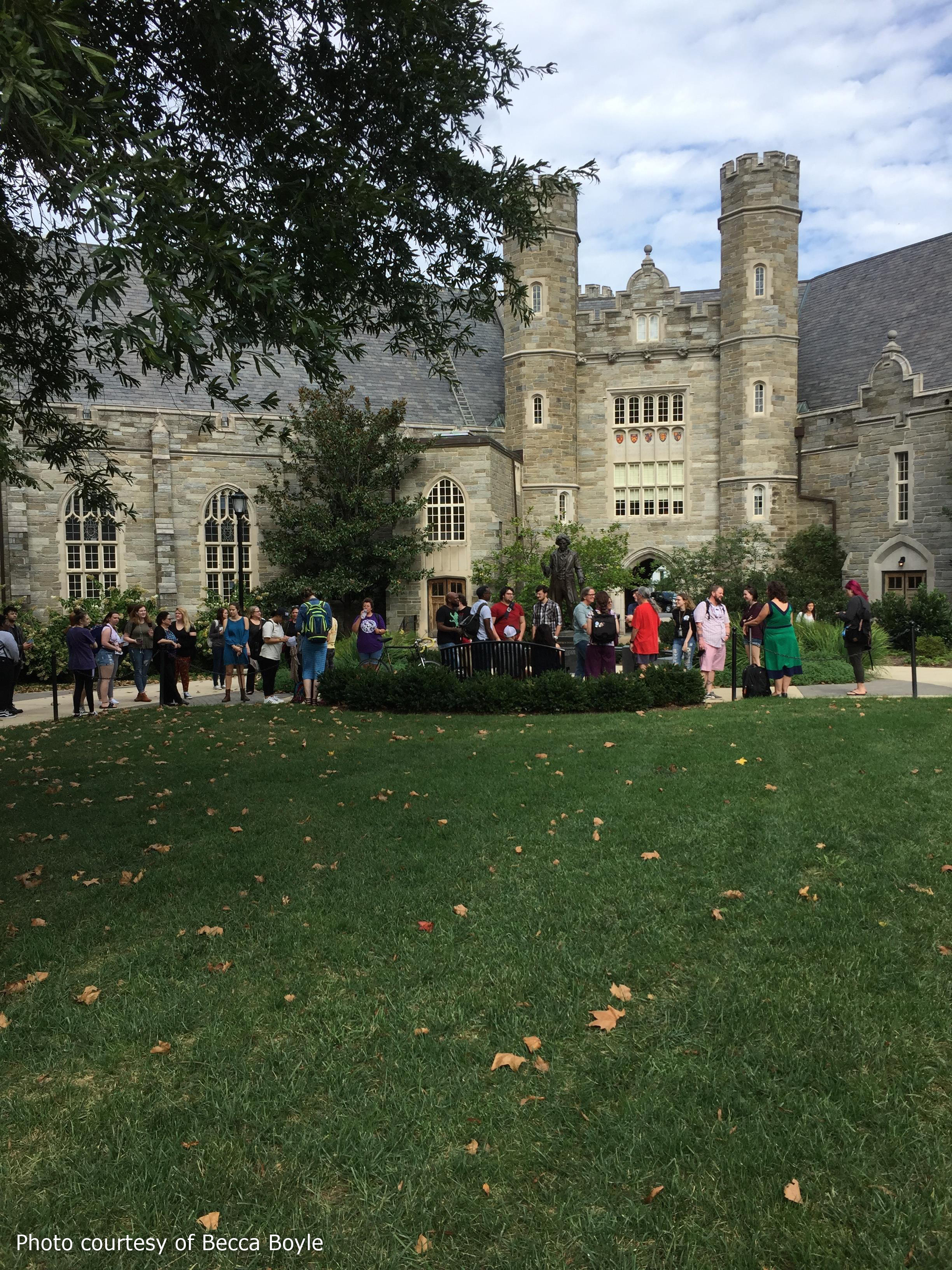 On Tuesday, Oct. 2, 2018 a rally dubbed “Rally on the Quad,” was held at 12:20 p.m. near the Frederick Douglass Statue on West Chester University’s campus. The advertisements for the event read “Rise up for justice,” as well as, “Resist cultures of violence against women.” Another digital poster read, “A time to gather as community. A moment of silent reflection followed by a speak out.” The hashtag, #WeBelieveSurvivors delineated the bottom of the black, digital poster sent via email to faculty members on campus.

At the rally,  fourth-year student Maureen Farley interviewed two professors and two students in attendance. Professor Seth Kahn stated the specific goal of the rally was “to create a community of visible activism.” Professor Simon Ruchti answered the specific goal of the rally was “[to] let students and faculty and staff know that they are not alone.” In the wake of the recent hearings of Christine Blasey Ford and Judge Brett Kavanaugh,  multiple women on social media outlets, like Facebook, have shared and initiated peaceful protests and rallies. Fourth-year student Sunny Morgan stated her role in the larger issue of violence against women is “to support other women, denounce violence against us, and to educate men and hold them accountable for their actions.”

Paige Baselice, another fourth-year student, said the Rally on the Quad was intended “to raise awareness for sexual violence against women.” Baselice stated this particular rally mattered to her because “it’s nice to actually see proof of a community that is there to support you.” Baselice admitted a risk of the rally was possibly “attract[ing] hate from people who doubt the experiences of survivors, but a huge benefit is that it proves that there is a real community of support and activism at our school.”

Referring to his role in the #MeToo- inspired movement, Kahn stated he strives to “be a man who is visibly supporting the cause so that other men are then confronted with the choice to either do something or not.” Kahn’s personal message is: “You cannot have it both ways. You cannot say that you are not a misogynist if you do nothing to help support women’s rights. You’re either with us, or you’re not with us yet.”

Ruchti stated his role as a transgender man puts him in a specific position when considering violence against women. He stated, “As a trans man, I remember what it felt like to be a woman, and now it’s my goal to give up my privilege as a man to make way for women and always speak up.” Ruchti said there was no risk involved with demonstrating at any rally similar to the one held on the Academic Quad, despite the recent controversial back and forths on Twitter, especially in light of Supreme Court nominee Kavanaugh’s alleged misconduct against Professor Ford. “There is no risk — it just makes it increasingly clear that we will not tolerate the exploitation and degradation of women,” he continued. In regards to the social injustice of violence committed against women, Ruchti said, “There’s hope.”