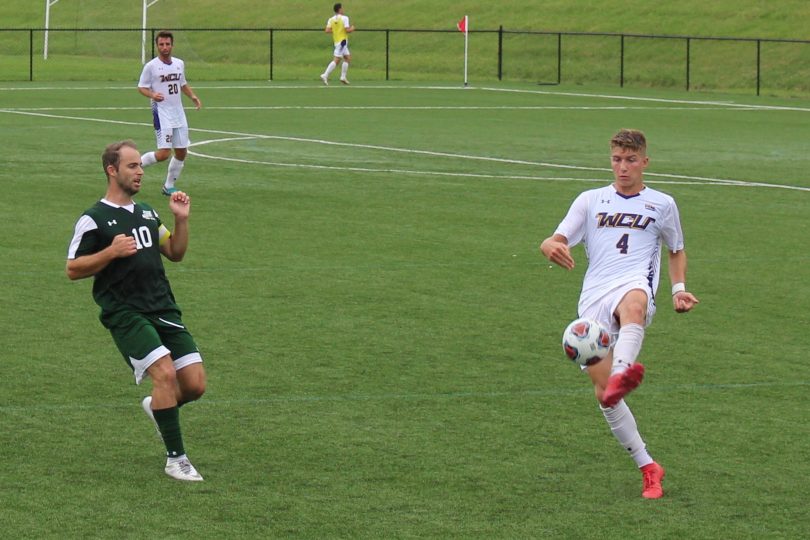 The Golden Rams battled from behind to tie Mercyhurst University 2-2 in Saturday’s game at Rockwell Field in West Chester. The tie was the Ram’s second of the season, and their record now stands at 2-1-2.

“They did a good job responding from a deficit two times,” head coach Michael Benn said of the Ram’s performance in the second half. “It shows a lot of character.”

West Chester faced an early 1-0 disadvantage after a goal from Mercyhurst’s Hady Sarr 11 minutes into the game. While the Golden Rams were shut out the entire first half, they played the second half with more energy and intensity.

“We need to play faster, and get our brains to be working faster,” Benn told his team during halftime. “We asked them to increase their effort a little bit; play a little more direct.”

The Golden Rams’ increased aggressiveness forced Mercyhurst’s defense to make mistakes. Mercyhurst’s midfielder, Ian Harris, committed a foul with 25 minutes left in the second period, which gave West Chester a penalty kick. Fourth-year midfielder Kyle Hopps took advantage of this opportunity and scored on the kick to even the score 1-1. The goal was Hopp’s first of the season.

With the game tied 1-1, Mercyhurst scored again with another goal by Sarr, but West Chester did not remain behind for long. They answered back immediately with a goal from forward Jason Pixley. Pixley now has three goals on the season, which leads the team.

In overtime, both teams had opportunities to score but ultimately failed to get the ball in the net. Goalkeeper Will Marshall made two back-to-back saves during the second overtime. In total, he had eight saves for the afternoon.

West Chester’s best opportunity came with less than a minute left during the second overtime. A corner kick by Midfielder Daniel Grindrod gave Pixley a chance for another goal, but Pixley’s header shot missed wide.

Overall, the Rams had 12 shots on goal while Mercyhurst had 15. Penalties were a major factor in the game as Mercyhurst committed 28 fouls while West Chester had 17.

Benn wasn’t sure why the team started out slowly in the first period.  “I wish I knew,” Ben said. “If coaches could figure that out, they would be pretty happy about it.”

One possibility he raised was that the team was too relaxed after their 1-0 win against Stroudsburg on Wednesday.

“We played really well Wednesday night,” Benn said. “And I don’t know if we felt like that was just automatically going be there again.”

“It wasn’t always pretty, but in conference play, you try to find a way to get your result,” he added.

The Rams will look to get back into the win column next Tuesday against the University of the District of Columbia. The game will start at 4 p.m. and will be played at home.

Brian Devine is a student at West Chester University. He can be reached at BD884861@wcupa.edu