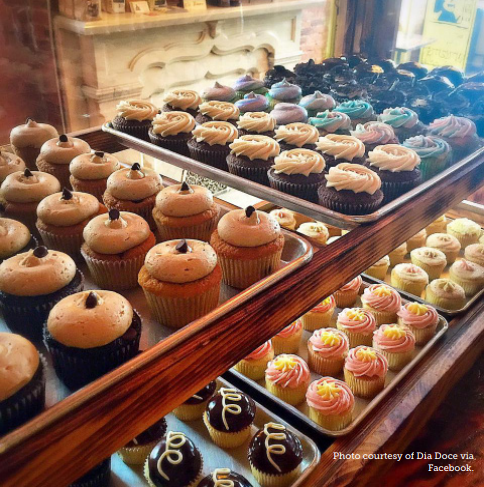 I hiccupped as I hurried against the brisk wind down High Street from a friend’s house in town, realizing I hadn’t sipped on any water today. Laptop in hand, I was prepared for another adventure to a small cupcake shop that had not only been featured on the Food Network show “Cupcake Wars,” but won! I was prepared for sweet bliss. After all, “Dia Doce” translates from Portuguese as “Sweet Day.”

“Close front door,” a voice spoke robotically as I stepped into the famous cupcake shop in West Chester. Too much watching of the Netflix Original “Black Mirror” made me question if I had stepped into some dystopian society, but the voice seemed to be a security system of some sort—nothing to worry about, just the precaution the owner took against the poor heat retention the older buildings in West Chester tend to have. Very weird doorbell.

Metal stools nailed to the hardwood floor and a hardwood bar-style counter occupied much of the center room space and led to the back, where I’m assuming the baking area would be.

“Hi! What can I do for you today?” The girl—probably a few years older than me—with bright blue eyes wearing lazy, ripped jeans walked toward the cupcake display under an out-of-place chandelier, where I was standing.

“I heard that I’ve just gotta try this place, that you’ve got the best cupcakes ever,” I said.

“I’ll take the Chocolate Chip Cookie Dough,” I hiccuped. “And something cold to drink.”

“We’ve got iced tea, iced coffee and water.” I decided on a triple berry iced tea with two pumps of the liquified pure cane sugar from the bottle on the wooden shelves behind the bar, which I have to report as some of the freshest iced tea I’ve ever tasted. $6.18 for one cupcake and a 16 oz iced tea—not too expensive, but not cheap either.

I took a seat at one of the tables between two colorful, hand-painted chairs, which were generally not comfortable to sit at for the duration of writing this very article. However, I can’t complain about such a warm and artsy environment as the one they’ve created.

Acoustic music played lightly over the faint sound of running water and dishes clanging together in the back. Another customer tapped his foot in his platform shoes and hummed along after chatting with the cashier about how her boyfriend is doing.

Like most five-year-old children would do, I licked the icing off my cupcake first to find the texture resembled cookie dough so much I worried if it was even healthy to be eating. Then, with critical intent, I sunk my teeth into the most velvety chocolate cake. My inner sugar demon had awoken. There is no professional way to say this: Dia Doce makes bangin’ cupcakes. Needless to say, my expectations had been surpassed.

The oddest doorbell I’ve ever heard rang again and again, “Close front door.” Once it was a mother and son coming in with such a list of allergies—peanuts, tree nuts and eggs—that Dia Doce surprisingly accommodated, along with gluten allergies and providing vegan options. Once it was an older woman coming in not to buy cupcakes for herself, but to buy cupcakes for the next group of a grandmother and grandkids, who then decided to continue spreading the love and bought cupcakes for a couple that came in, which inspired me to add to the cycle just before I exited.

Dia Doce doesn’t just sell amazing cupcakes, it has its own little community. Even a small act of kindness can brighten a person’s day and it made my heart smile to see that in action.

Kirsten Magas is a second-year student majoring in English with minors in biology and creative writing. ✉ KM867219@wcupa.edu.