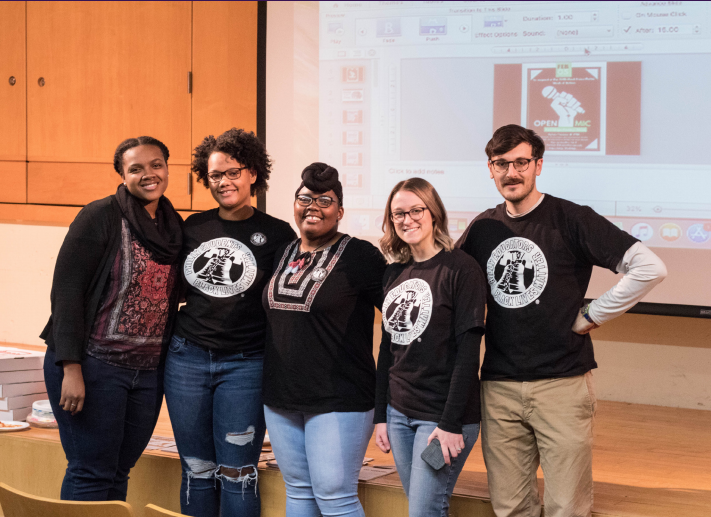 Over 50 students, faculty and staff spent the first Monday night of this year’s Black History Month furiously snapping their fingers in response to their peers reciting verses about topical subjects such as racism, hate and Trayvon Martin under a lone spotlight in Sykes Theater.

On Monday, Feb. 1, West Chester University sponsored an open mic night in conjunction with the National Black Lives Matter Week of Action. Hosted in Sykes Theater, the event drew a diverse crowd containing dozens of students, faculty and staff, several of whom performed slam poetry, readings and musical numbers. Racial and social justice issues were the themes of the night, and each performance addressed the difficult aspects of the Black experience in America and stressed the importance of unity and equality.

The original initiative for presenting the topics of racial inequality and police brutality in schools was led by members of the Caucus of Working Educators, a faction of the Philadelphia Federation of Teachers. The group sought to bring awareness and understanding to the Black Lives Matter movement in schools by creating curriculum, seminars and discussion groups for students and faculty. Started in 2017, this effort has since been mirrored by school officials in cities across the country.

One of the faculty members involved in Monday’s event was West Chester Assistant Professor Dana Simone. Simone, who served as one of the facilitators of the night’s agenda, considered this event a grassroots effort and said, “It’s something that students reached out to participate in to make this happen.” With the help of several students, Simone was able to organize the event in the hopes of expanding the Caucus’ work beyond K-12 education. While the original concept was met with push back in Philadelphia’s secondary schools, Simone says she has not experienced any resistance on campus. Simone anticipated roughly 20 spectators and participants to attend along with various campus organizations, such as the Student Health and Wellness Center, which provided refreshments.

Before the activities commenced, several leaders took to the stage to lay down the rules for the evening. It was established that confidentiality was a top priority and performers had to give explicit permission to be recorded. Those in attendance were asked to respond to performances by snapping their fingers, as opposed to clapping their hands, and were informed that some of the content may be difficult or triggering to hear.

The housekeeping remarks were followed by a string of students and educators giving presentations ranging from original works of slam poetry to acoustic renditions of popular music. One these performances was offered by Franklin Ramirez, a junior history and social studies double major. Ramirez, who described himself as a “hopeless romantic,” occasionally writes poetry focused on female empowerment, inspired by his sisters.

Ramirez signed up to perform an original spoken word at the behest of his friends. “I really hope it brings more awareness and it’s okay to voice your opinion on something you believe in,” he said. The night concluded with an invitation from Simone to discuss what actions should be taken to promote racial justice.

Event leader and senior women and gender studies major Tassiah Shannon was pleasantly surprised by the number of people in attendance. She attributes much of the support to social media promotion. “I honestly think it’s a bigger turnout than I expected,” said Shannon.

The Lawrence A. Dowdy Multicultural Center can be contacted at multiculture@wcupa.edu.

Olivia Bortner is a third-year student majoring in marketing. ✉ OB876952@wcupa.edu.