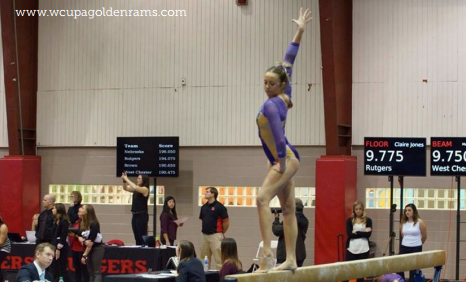 Starting the competition off on vault, senior Meghan Chan scored a 9.6 on the event, placing third. Sophomore Paige Parsnik tied for fourth place with a score of 9.475. Freshman Jess Meakim placed fifth with a 9.45.

Junior Myranda Marshall won bars with a beautiful routine, scoring a 9.7, and freshman Mel Wojewoda tied for third with a 9.525. Sophomore Jordan Miranda placed fifth in the event with a 9.35.

Sophomore Sarah Boyd lived up to her All-American title and came in first on the event with a 9.8 routine. Freshman Yoli Nodarse proved to be a great addition to the Golden Rams, placing third on beam with a 9.75 and junior Cassie Hageman followed in fourth with a 9.725.

West Chester had a great first meet, placing first as a team in the overall competition, as well as first as a team on each event besides vault where they placed second instead.

The following weekend, the Golden Rams traveled to Ursinus College on Sunday, Jan. 21 for a dual away meet. Once again, WCU took home the win over host team Ursinus (191.725-186.8).

Compared to the previous meet, Ursinus had a much better showing, but they were still unable to defeat the Golden Rams on home turf.

The Golden Rams had a spectacular first three rotations, all athletes having remarkable routines. However, the fourth event, beam, proved to be a struggle for the Rams, who are usually solid on the event.

Starting the competition on bars, Marshall once again took first place in the event with an amazing 9.8 routine. In second place was Wojewoda with a 9.75. In fourth, fifth, and sixth place was a tie between sophomore Natalie Onderko (9.625), Chan (9.575) and sophomore Bella D’Orazio (9.55).

Next up was vault, where Meakim took first, scoring a 9.7 on the event. Chan followed in second with a 9.625. Junior Lindsey Mathis and senior Rachel Blair tied for third, both receiving a 9.525.

At the second home meet on Jan. 27, our Golden Rams crushed the competition. They finished with a win over visiting teams SUNY Cortland and Rhode Island College with an overall score of 192.05, almost seven points higher than Cortland State, the team who took second place.

West Chester took the top spot on all events except for beam, where they once again took second.

West Chester claimed the top three spots on the vault. Meakim proved to be an asset on the event as she once again placed first with a score of 9.675. Chan and Mathis tied for second, both scoring 9.575. Blair came in third with a 9.55.

Visiting team SUNY Cortland was a contender for West Chester on the beam, coming in first as a team and taking first and second in the event as well. Boyd, Nodarse and Chan followed close behind with Boyd and Nodarse both scoring 9.775 and Chan with a 9.75.

Even with having to count a fall in the team score, West Chester continues to demonstrate the incredible talent the team possesses. This is the start of a remarkable season for the Golden Rams.

Meghan Chan is a business management major with minors in IT and finance. ✉️ MC827361@wcupa.edu.