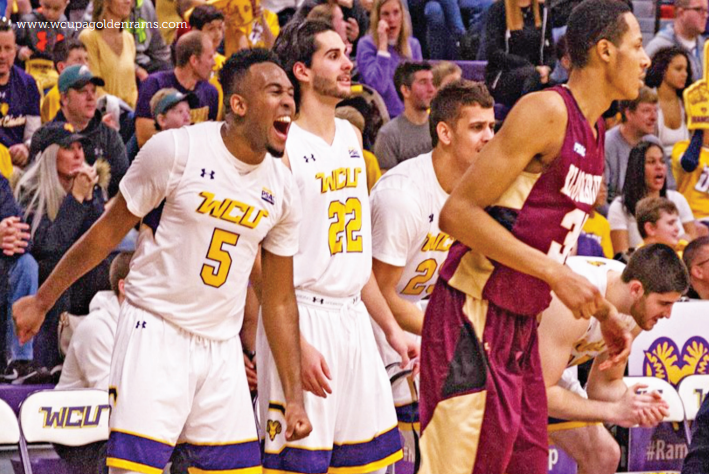 Coming into their PSAC contest with Millersville on Wednesday, Jan. 31, the WCU men’s basketball had lost their last three games after a blistering 15-1 start to the season.

A three-game losing streak can be frustrating, especially for a team that features only one senior and several key freshmen.

The Millersville Marauders were the unfortunate recipients of whatever frustration the Golden Rams were feeling. After being tied at 13 for 10 minutes during the first half, WCU erupted for a 33-7 run that put them firmly in the driver’s seat. They forced Millersville into plenty of live-ball turnovers that led to easy points. At the half, the score was 46-20 in favor of the Golden Rams.

In the second half, the Golden Rams continued to extend their 26 point lead, and even almost doubled it. At one point the lead reached 51 points, and Hollinger Field House was deafeningly loud. With no hope of a comeback, Millersville could do nothing but watch as the red-hot Rams continued to score, while the Hollinger faithful cheered in unison “START THE BUSES!” The final Score: 107-63 in favor of West Chester.

Tyrell Long paced the team with 20 points, 9 rebounds, and seven assists. Matt Penecale was 6-6 from the field for 14 points with seven assists. Freshmen Terrence Moore, Jawan Collins, and Evan-Eric Longino provided valuable minutes off the bench as well.

Saturday, the Golden Rams traveled to Kutztown to take on the 15-4 Bears, for a matchup that could very well have playoff implications.

Senior standout Tyrell Long scored 18 of his 34 points in the first half, with Jackson Hyland scoring 12 to help send the Golden Rams to halftime with a 52-40 lead over Kutztown. In the second half, Freshman Evan-Eric Longino exploded for 17 points after going scoreless in the first half. With a great all-around team effort, WCU was able to secure a rather comfortable 108-99 win.

As of Saturday, Feb. 3, the WCU Golden Rams are 17-4 and are back in second place in the PSAC east. Their next game will be played at Mansfield University on Wednesday, Feb. 7.