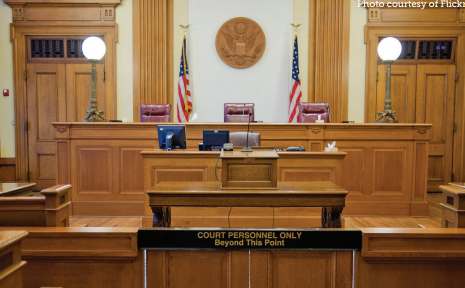 Former student, Austin Eaddy, accompanied an intoxicated freshman into the New Street Parking Garage in 2016. The victim of this crime wishes to remain anonymous. Eaddy was sexually assaulting the victim when an eyewitness, also a WCU student, walked into the parking garage and stopped the crime from continuing.

After the victim and eyewitness reported the assault to Public Safety, Eaddy served a total of 16 months in Chester Country Prison before officially being sentenced. On Oct. 25, the trial came to an end with Judge David Bortner presiding over the case.

According to a reporter from the Daily Local who was present at the trial, there were many ups and downs throughout the duration of the trail. Eaddy fought his case claiming that he too was a victim. His attorney pointed out that the eyewitness in the case was also a victim of sexual assault, which could have swayed her judgement of what occurred. Eaddy also stated an apology at this time.

“Our deepest concern is for the survivor of this criminal act who very courageously stepped forward to take legal action and seek justice. It is our hope that the verdict helps put an end to a tragic situation,” said Executive Director from West Chester University’s Office of Communications Nancy Santos Gainer.

The victim of the crime and eyewitness also made testaments during the trial about the hardships they have endured since the assault occurred and how this incident has negatively impacted their lives in many ways.

“The university also applauds the actions of one of its students who took action as a bystander and interrupted the assault,” said Santos Gainer.

In the end, Eaddy was sentenced to four to 10 years behind bars in state prison as Bortner considered him a danger to the community.

According to West Chester University’s Annual Security and Fire Safety Report per the Clery Act, four on-campus rapes were reported in 2014, five in 2015, and four in 2016. All of these incidents occurred in resident facilities with the exception of one which occurred on public property.

While these numbers may seem small, those are still four individuals whose lives were affected by the act of rape. These are also just the incidents that were reported to Public Safety. There may be more times a sexual assault has been committed but has gone unreported.

To bring awareness to this issue on campus and try and reduce those numbers even more, the Center for Women and Gender Equity has many resources and campaigns to help people become educated, spread awareness and continue to encourage people to come talk to them if they feel uncomfortable about any situation.

“We promote educating yourself. [This education can include] getting trained through the Green Dot Bystander Intervention which gives you the tools and the knowledge to be able to step in in any situation with different tactics,” said Madison Gharghoury, a junior political science major and peer educator for The Center for Women and Gender Equity.

“Using the three D’s: direct, delegate or distract can be used for anything such as sexual misconduct, to partner based violence, or any situation that seems uneasy. The six-hour Green Dot Training gives you the tools and the knowledge to be able to step in any situation to be able to stop something from going to a place it could be potentially harmful to either parties involved,” added Gharghoury.

The university understands that reporting a crime of this nature as the victim or eyewitness can be difficult and emotionally straining. However, WCU strives to promote its many resources and counseling services to people who need them.

“WCU understands the amount of strength and courage required to come forward and disclose a sexual misconduct incident. The university is also committed to a thorough and equitable conduct process. Support during the conduct process is provided for both those reporting and those responding to reports of misconduct,” said Santos Gainer.

“Even if you are unsure about what took place or what you saw, it is best just to talk about it to a confidential resource on campus,” said Gharghoury.

Some confidential resources on campus include: The Center For Women and Gender Equity, the WCU Counseling Center and campus Sexual Misconduct Advocate Sherry Mendez.

WCU is standing together to make the average of people who are sexually assaulted on campus be reduced from four to zero.

Mackenzie Haverdink is a fourth-year student majoring in communication studies. She can be reached at MH850486@wcupa.edu.