WCU’s planetarium kicks off “Once in a Blue Moon” show 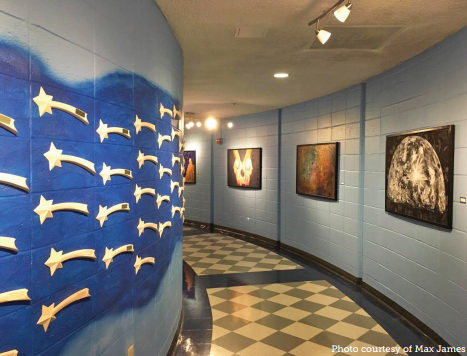 Paintings adorned one wall of the circular entry ranging from photo-realistic recreations of Newton’s study to surreal ideas of vague constellations. The entirely student-created art resided parallel to the shooting stars on the opposite wall, each with a name or phrase given by a donor. Some had celebrity names like David Bowie/Ziggy Stardust, others had pets and even more had epitaphs permanently etched among the stone stars. This entryway served as the introduction to West Chester University’s planetarium show, “Once in a Blue Moon.”

Schwarz has been the director of the planetarium for over a decade. The show, focusing on common misconceptions and facts related to the moon, occurred on Nov. 3, the night of a full moon.

The audience explored ancient constellations, foreign galaxies like Andromeda and the rings of Saturn, all through Schwarz’s narration. Bowie and The Beatles played distantly through the speakers, adding to the atmosphere of the event.

The crowd in attendance consisted primarily of families and couples from the community with barely any students. While the Planetarium can be rented out for various clubs on campus, the Friday night shows primarily serve as a bridge between the university and town.

About two thirds of the way through the presentation, Schwarz expanded upon the idea of “planetary wobble” and how this transforms our modern idea of Zodiacs.

“Because of our planet’s movement, we see the stars differently . . . 75 percent of us have very different Zodiac symbols than what we think,” she said, to the surprise of the audience. One audience member discovered they were less Capricorn and more Sagittarius. She also emphasized to the crowd that it may be best to avoid this topic with more avid Zodiac readers.

When Schwarz was asked about the artwork outside the auditorium, she discussed rotating the artwork with future student-made pieces. This would serve as a continuation to the beautification project started in 2014.

“I was . . . just fascinated. The history of the constellations were amazing,” said an alumnus of West Chester University.

The next Planetarium show will be held next Friday, Nov. 10 at 7 p.m. General Admission seating is $6 and the tickets are available for purchase at www.wcupatix.com. Schwarz can be reached at KSchwarz@wcupa.edu.

Max James is a third-year student majoring in communication studies with a minor in creative writing. They can be reached at MJ853459@wcupa.edu.