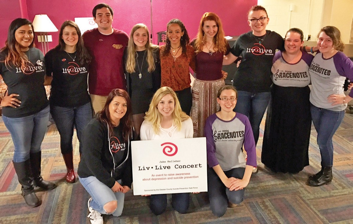 Active Minds at WCU strives to erase the stigma surrounding mental health. West Chester’s chapter of Active Minds hosts a range of events for students all year round in order to raise awareness. Some of these events include free breakfast during finals week, Stress Less Week and post secret an event that allows students to anonymously write down secrets about themselves they want to share.

All of Active Minds’ events encourage students to be more open about mental health.

On April 25, Active Minds at WCU partnered with the Chester County Suicide Prevention Task Force to host LivLive, a concert that raised awareness of depression and suicide prevention.

The concert was held in the Common Grounds at Sykes and included food, raffle baskets, door prizes and live talent.

Active Minds has been holding LivLive concerts for years now. President Amy Cander says she started helping with them back in 2014 and now aims to put one on every semester.

The money raised at LivLive goes towards the WCU Active Minds’ chapter fundraising goal. Cander states that every campus chapter of Active Minds has an online fundraising page with each chapter’s goal being around $1,000. The money raised at WCU Active Mind’s spring semester LivLive concert went towards this goal. Cander states that the concert “allows our campus chapter to receive more resources to use on campus throughout the year.”

The LivLive concert gives students the opportunity to share their talents with the school. This year included singing covers and original works, piano, guitar, poetry reading, Irish dancing and acappella groups. The concert included a total of twelve performers; two of which signed up the night of the event.

Additionally, this concert featured raffle baskets and door prizes. Everyone who went into the Common Grounds to watch the concert was given a ticket upon entry that had the potential to win one of Active Minds’ four gift cards.

Along with the door prizes, there were also raffle tickets being sold for five different baskets. These basked included a wide variety of options: “Stress Less,” “Cool and collected,” “A Night Out in West Chester,” a beach themed basked and a craft basket. The baskets were each filled with prizes such as candles, bath and body works products, coloring books, sandals, gift cards and more. With the Chester County Suicide Prevention Task Force at the concert, guests were given information on suicide prevention. It was a night of performers, informative content, and highly sought after raffle prizes in the name of heightening the student body’s awareness of mental health issues.

Grace Harvey is a first-year student majoring in communication studies. She can be reached at GH872279@wcupa.edu.