Unlocking the secrets of the cell to heal humanity 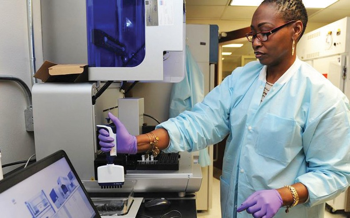 Humanity has come a long way in understanding human biology and the applications of this knowledge to the reduction of human suffering by disease; however, we still have a long way to go. Some of the most basic processes of the cell are still not completely understood, and this lack of understanding leaves humanity in a particularly precarious position.

There are some 20,000 gene-coding proteins in the human cell, and some of the most devastating diseases arise from the dysfunction of just a single gene-product. Niemann-Pick Type C (NPC) represents one of these diseases, and arises when one of two critical NPC genes is mutated in both parents and passed onto their offspring.

When the NPC proteins are mutated, the recycling center of the cell, the lysosome, is unable to recycle certain molecules—most notably, cholesterol. As a result of this inability to recycle certain molecules, they accumulate inside the cell and ultimately lead to the symptoms associated with NPC disease. Some of the more prominent symptoms associated with this devastating disease include an enlarged liver and spleen, balance problems, seizures, and many other neurological symptoms that usually develop during childhood or early adolescence. The prognosis is very poor, and this disease always results in death.

Though NPC disease is not yet completely understood, there are passionate researchers who have dedicated their careers to understanding how this disease develops and how it might be treated. Understanding NPC disease requires scientists to better understand basic processes of cell metabolism and NPC proteins.

These researchers are committed to unlocking these secrets of the cell and using their findings to develop treatments for NPC. One particularly relevant area of NPC research is focused on understanding why neurons are so disproportionately affected by the disease.

Dr. Steven Walkley, a leading researcher in the field of NPC research, is a Neuroscientist at the Albert Einstein College of Medicine. Walkley has a strong interest in genetic brain diseases and strives to understand not only how NPC disease affects neurons, but is also committed to investigating and developing therapies to treat the disease. Unlike most other cells in the body, the neurons that you are born with do not replicate, and must be maintained for a lifetime.

Walkley stresses that this static nature of brain cells contributes to their keen sensitivity of even the slightest changes in homeostasis. As a result, these cells are disproportionately damaged by the accumulation of cholesterol and other molecules as a result of NPC, and Walkley is determined to understand why this happens and how it can be mitigated.

To better understand how neurons are affected by NPC disease, Walkley’s lab studies mice with a naturally occurring NPC disease to understand the disease pathology and potential treatments. In fact, he discovered one of the first treatments for NPC disease—miglustat, a drug that was originally developed as a potential therapy for Tay-Sachs and Gaucher diseases.

Furthermore, his labs discovery of the amazing therapeutic effects of a compound called cyclodextrin was one of his most significant contributions to the field. Cyclodextrin has been shown to significantly increase the lifespan of mice and cats with naturally occurring models of NPC disease.

Another leading researcher in this field is Dr. Charles Vite, a veterinary Neurologist at the University of Pennsylvania. Vite uses a cat as a model to study NPC disease in the brain—striving to understand why neurons are disproportionately affected and how therapies might mitigate this. He explained that sometimes larger models of the disease better mirror what is seen in the human disease—and he often works in close collaboration with Walkley to understand how findings in the mouse model compare to the larger cat model. A prominent and vital component of Vite’s contributions to the field are his investigations on how cyclodextrin treats NPC in his cat model; the results have been extremely uplifting. Upon treatment with cyclodextrin, cats with the disease live about three years longer, on average, than they do when left untreated!

I had the great honor of speaking with both of these leading researchers. During our conversations, I came to realize how truly committed these researchers are to their fields. Their love for neuroscience, deep curiosity and passion to better the lives of individuals afflicted with this disease left me in awe. Thanks to dedicated researchers like Walkley and Vite, scientists are understanding more about NPC and basic cell biology every day. Things are finally starting to look brighter for those who are afflicted with NPC and their families.

Walkley and Vite both agree that cyclodextrin is one of the most promising therapies out there for NPC today, and it is currently in clinical trials. Vite believes that one of the greatest difficulties in working with this disease is that too often, individuals do not receive these developing treatments until the disease has already progressed significantly. To avoid this problem, researchers are looking into the development of newborn screening for NPC, and this is something that will likely be established as a concrete treatment for NPC is developed.

As current students, it is critical to realize the importance of the scientific pursuit of knowledge for humanity. With a better understanding of biology comes an ever- increasing freedom from human disease and suffering. With this in mind, we should dive into our coursework with vigor, and look for opportunities to get involved with current research. Walkley   stressed the importance for college students to reach out to local scientists to get involved.

The fight for knowledge is by no means finished—we will continue this trek into the unknown where scientists of today leave off. With every increase in knowledge, we will bring humanity one step closer to a freedom from human suffering by disease.

Denston Carey is a student majoring in cell and molecular biology. He can be reached at DC816832@wcupa.edu.