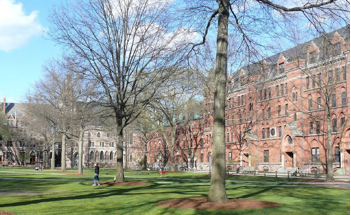 Of the many classes to have justly or unjustly claimed to be the victims of subjugation in recent memory, college graduate students are unique in that their claim has some backing in tradition.

As has been the butt of many jokes, graduate students typically receive a measly few thousand dollars in compensation per semester. It should come as a shock to few, then, that graduate students across the country find the current system wanting and in need of reform.

However, such is not the case with students in the Graduate Studies department of Connecticut’s prestigious Yale University. The Ivy League institution and hotbed of academic liberalism actually rewards their students quite handsomely, and is much more generous with their graduate student compensation than most any other university in the country.

According to the University: “Yale continues to provide unsurpassed support to its doctoral students. They receive annual stipends of $30,000 or more and grants to cover tuition.”

That’s compensation equivalent to the median annual salary of a substitute teacher in the United States, on top of which Yale graduate students also have their tuition fees completely waived; tuition, mind you, with a price tag of $40,000 per year.

That’s not all that Yale graduate students receive, though. The university’s statement goes on to note:

“Yale pays for the health insurance of all doctoral students. If a student has a spouse but no children, [the university] also pays half the cost of the spouse’s health insurance.”

In addition to granting free health insurance to the students, Yale also agrees to swallow half the cost of life insurance policies belonging to their student’s spouses. Over the six-year course of a single student’s education, the total cost of this support comes out to approximately $375,000.

If the student has a family, they receive even more support from Yale. This figure rises to as high as $450,000 because of the healthcare.

Taken in sum, Yale graduate students receive the equivalent of $70,000 in compensation each year and have their healthcare totally covered by the university.

Despite this handsome compensation, many Yale graduate students have come out in protest this week, citing these benefits as insufficient and apparently claiming that they are entitled to greater compensation.

But here’s where the lunacy of the academic left becomes viciously apparent: in protest to these benefits, Yale students have begun staging a “symbolic” hunger strike. As part of the strike, the protesting students have pledged not to eat anything… unless they get hungry or want to eat.

Yes, what would have read like a headline from The Onion only a few short years ago has become a startlingly absurd reality in 2017.

The basic premise of a hunger strike is thus: in protest, demonstrators cease to eat or drink in order to put pressure upon the institution to which their protest is directed. The idea behind this is that as demonstrators go for extended periods of time without eating, they begin to slowly waste away and die. This has been successfully utilized in the past by figures like Cesar Chavez and Mahatma Ghandi protesting low agricultural wages and British rule, respectively.

The reason this is effective is because no institution wants to be seen as responsible for the death or harm of its demonstrators. By taking away the aspect that makes hunger strikes meaningful, the Yale graduate student protestors have essentially offered nothing more than impotent, actionless, virtue-signaling devoid of any substantial ethos.

Worth noting is the fact that there are only eight members of the protesting student union dubbed the Local 33. According to an official statement from the group, they have “committed [themselves] to waiting without eating.”

Waiting, of course, for additional benefits they feel their studies entitle them to, despite the reality that the sum of their compensation—were it taxable—would land them firmly in the 25% tax bracket.

This most recent assault on reason is further indicative of a broad pattern of disconnection and misplaced entitlement coming from the academic left. A movement without meaning, this special brand of “slacktivism” centers on taking shallow, feel-good measures toward an issue without having to ex- pend any notable effort or make any significant sacrifice.

These measures are definitionally vain and valueless, attempting to take a righteous, holier-than-thou stance without the bother of having to actually go out and do anything.

This phenomenon is not limited to Yale, of course, but is instead found everywhere liberalism is held in higher regard than reason, such as on college campuses across the country.

Thankfully, the novelty of this brand of activism is quick to wear off as protesters realize their demonstrations have virtually no effect on reality and instead serve only to affirm the delusions of a demographic with an already hearty entitlement problem.

Silence Dogood is a student at West Chester University.