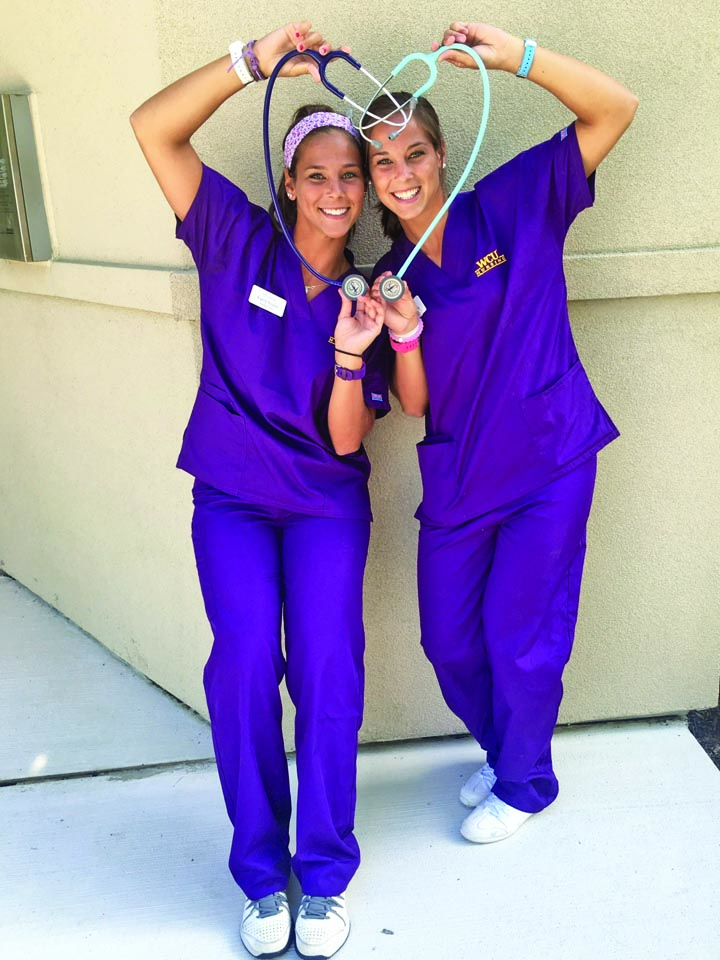 Ashley and Emily Sapen have done practically everything together, from cheering for 13 years to attending the same college and even majoring in nursing together.

But on Christmas Eve of 2003, their lives changed drastically. Emily was diagnosed with Type 1 diabetes, and Ashley received the same results only three days after.

At age seven, Ashley would experience stomach and head pain after eating a meal.

“I would cry a lot after eating lunch or dinner, but couldn’t explain what was happening or what I was feeling. I even lost eight pounds in a short amount of time, and as a second grader, that isn’t normal,” said Ashley, a junior nursing major at West Chester University.

Their mother, a registered nurse, knew something was not quite right with her young daughter and decided to bring her to the Hershey Medical Center for an exam.

While Emily had never experienced any type of symptoms similar to her sister’s, doctors and family still took precautionary measures and began tests on her as well.

Doctors at Hershey Medical Center were shocked to see the same diagnoses with twins only 72 hours apart.

Although identical twins acquire identical genes, it does not necessarily mean that they are both at risk for the same diseases.

Research has found that if one twin has Type 1 diabetes, the other will have a 50 percent chance of also possessing the same disease. Type 1 diabetes is a chronic condition in which the pancreas produces little to no insulin, which is needed to allow sugar to enter cells to produce energy.

After being diagnosed, the twins’ diabetes did not stop them from doing what they loved most: cheerleading. After 10 years of cheering for school sports teams and travel competitions, Ashley and Emily decided to try out to become Golden Ram cheerleaders.

In the beginning, it took time to adjust to their new devices, and their diagnoses often lead to interruptions during practice.

With the advancement of technology since their first diagnosis in 2003, the devices needed to maintain control over their diabetes have become more efficient and obscure. In high school they helped give each other shots anywhere from five to 10 times a day.

Now, they wear a small pump 24 hours a day, seven days a week, that only needs to be changed every three days.

Cheerleading requires hours of practice, constant movement and physical activity, which can cause insulin to work faster.

“Everything affects blood sugar, whether it is stress or exercise. It is important to balance your meals and exercise to prevent a drop in blood sugar,” said Emily.

Due to an early diagnosis, Ashley and Emily spent a great amount of time around doctors and nurses being educated on their disease and attending consistent check-ups.

It was normal to spend a lot of time immersed in the medical field. Over the years, the support and encouragement of their nurses led them to pursue a career in nursing.

Since 2003, the twins have been involved in countless camps and foundations that benefit juvenile diabetes.

Over the years, Ashley and Emily assisted in raising $50,000 for the Juvenile Diabetes Research Foundation (JDFR).

The twins were also a part of the Children’s Miracle Network, aiding to raise money and awareness about the disease.

The future undeniably seems very bright for these identical twins. Ashley, who is now the captain of the WCU cheer team, hopes to become a registered nurse and a diabetic nurse educator.

Emily holds the position of Social Chair for the Student Nurses’ Association of Pennsylvania (SNAP) here at WCU and aspires to specialize in the Neonatal Intensive Care Unit (NICU) or pediatrics after becoming a registered nurse.

Whether they’re on the sideline or spending countless hours working at the hospital, Ashley and Emily take the daily obstacles of Type 1 diabetes in stride.

With the support of each other and their sisterly bond, they are able to look past their disease and have a positive and upbeat outlook on what is to come.

Taylor Tosheff is a fourth-year student majoring in communication studies with a minor in journalism. She can be reached at TT801606@wcupa.edu.