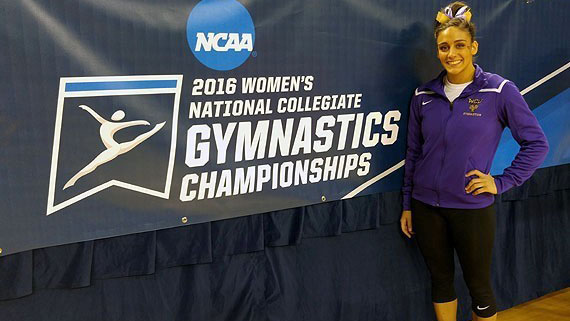 ECAC Division II Gymnast of the Year, two-time NCAA Division I regional selection, school-record holder in all-around, floor exercise and vault. Majesta Valentine has filled the trophy case in her three seasons at West Chester University. Perhaps it isn’t over.

Valentine entered the weekend with a chance to build on her illustrious West Chester career at Hyland Arena on the campus at Lindenwood University during the 2016 USA Gymnastics Women’s Collegiate National Championships on Friday, April 8.

WCU sent 10 gymnasts to the competition, headlined by Valentine and senior Meghan Brannon, who made their way to the finals on Sunday afternoon. Unfortunately, finals results were not released before publication.

Valentine dominated in the first session, being ousted for the top overall score by just two hundreths of a point. She finished with a 39.200 while Maria Hundley from Seattle Pacific finished with a 39.400. Valentine advances to the finals on Sunday for the third time in her West Chester career.

Valentine has had a season for the record books, literally and figuratively. She has etched her name in Golden Ram history for gymnastics throughout her first three seasons in the purple and gold, and still has her senior season to continue climbing the mountain. She is the first West Chester gymnast to be selected to compete at the NCAA Division I Regional competition twice in her career.

After the ECAC Division II Championships on March 19, Valentine was awarded ECAC Gymnast of the Year for her accolades. She will likely be the front-runner in talks for West Chester University Women’s Athlete of the Year when the time comes.

AJ Arcaini is a fourth-year student majoring in communication studies with a minor in journalism. Contact him at AA788494@wcupa.edu